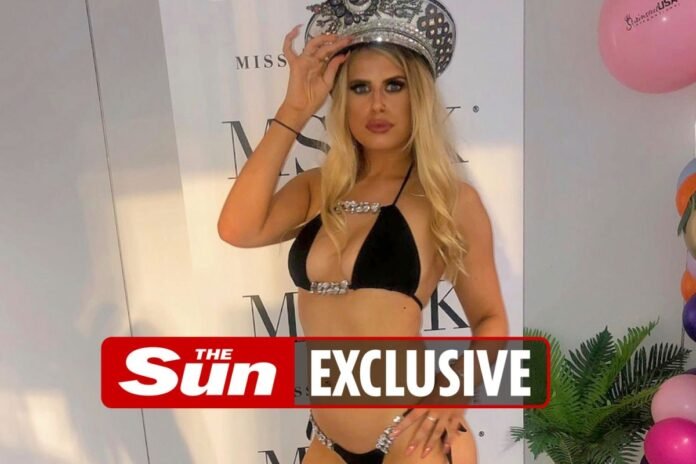 LIKE most of us during last year’s first lockdown, marketing executive Sabrina Ford reckons she put on nearly two-and-a-half stone.

But instead of following Joe Wick’s YouTube channel and taking part in his online PE With Joe classes like millions of others, Sabrina, 25, opted for a quick fix route to lose her tummy.

“I had no gym access, I was eating too much and working from home,” she admitted. “I did try to reign in the eating but I still went from a 10 up to a size 14.”

Sabrina, who is in a relationship, also works in aesthetics and was one of the first to find out about Aqualyx, a fat dissolving injection.

“It’s been around for a while but I’ll be honest I was in shock when I found out about it,” she said.

“It’s like liposuction, but without the side effects of bruising or recovery from a general anaesthetic. There’s no surgery and no downtime.”

Wanting to find out more, Sabrina decided to take part in a training course for the injections. She revealed: “I did my training course when I found out about it last year.

“My motto is I test it on myself first and if I like it then I offer it to my clients. I was amazed to see my tummy roll had shrunk.

“When I’m administering the jabs on myself I do it only on my stomach. I did have a go on my chin but I was too queasy to inject myself there.”

According to the blurb, fat dissolving injections can help achieve a slimmer, more contoured body shape and results last between two and four years.

Sabrina, who lives in Kent, explains that the cost of a session runs from £180 up to £500 according to where the clinic is based. Most clients will need to have three sessions over a course of three months as there is a period of one month down time between each session.

“On myself I do up to 40 injections a time. It’s a bit weird doing it on my tummy,” she said. “How I do it is I mark up a grid across my tummy. Each square is 1cm apart and then I inject myself in the middle of each square.

“It can bleed a bit and the injected area can be swollen for a couple of hours. That’s why I use a numbing cream to help with the pain.”

Sabrina says the jabs can be used on other areas of the body including fat bags under the arms, underneath the cheekbones and even fatty knees.

She warns, though, that the effects will only last if you keep an eye on your weight.

On myself I do up to 40 injections a time. It’s a bit weird doing it on my tummy

“It lasts as long as you look after it. If you leave and then go and eat KFC and don’t exercise afterwards then it’s going to come back,” she explained.

“But if you’ve got a fat pouch below your belly that you can’t shift then it’s definitely worth doing it. In this area it takes a few sessions and many injections with a microfine needle.

“It’s mainly women in their mid 20s to mid 30s who want it done. I’ve noticed it’s the second most popular procedure after lip fillers.”

Sabrina doesn’t weigh herself and she doesn’t take before and after measurements either.

“Everything is by eye with me. I usually see the full results within a week. A friend who is a regular gym user has some stubborn fat areas that I’ve been able to help her with and shift,” she said.

Sun Doctor Carol Cooper warns that fat-dissolving injections are “not a technique for everyone”, but they are deemed safe when administered by an expert.

Speaking to Fabulous, Dr Cooper said: “Fat-dissolving injections are meant to be given by a suitably trained doctor or nurse. The injection contains deoxycholic acid, a man-made substance similar to bile.

What are fat-dissolving injections & how do they work?

According to Harley Street, Aqualyx is made from Deoxycholic Acid and plant compounds that, when injected into the skin, liquify fat cells.

The compounds attach to fat deposits and break them down over time, with the body naturally dissolving the fat and flushing it out.

Areas they are most commonly used on include the stomach, hips, inner and outer thighs, ankles and under the chin.

They are used as a non-invasive alternative to liposuction, which would require surgery.

“Once in the body, it destroys fat cells. Metabolism then deals with their residue. In the UK, the product is marketed as Aqualyx, while the US version is known as Kybella. There are also other products which contain other ingredients as well.

“Typically, it’s given as a course of two to four treatments with four to six-week intervals between each session. Although the procedure doesn’t hurt much, you can get swelling, bruising, pain, tenderness, itching, and warmth over the injection site. Most of these resolve within three to five days, though expect swelling to persist for up to three weeks.”

Dr Cooper continued: “Fat-dissolving is most effective on a double chin, but it can be used elsewhere such as abdomen and upper arms.

“It’s not a technique for everyone. Any reputable clinic would be aware of who shouldn’t have it. It also tends to work less well in over-60s as skin loses its elasticity with age.

“In expert hands, you can consider fat-dissolving injections to be fairly safe. But doing it yourself can increase the risk of infection, bruising, or a lopsided end-result.”

Last March, she booked for a Brazilian Bum Lift (BBL) in Turkey. Tempted by a ‘pandemic special’ price deal, Sabrina checked the surgeon out on a “Trust Pilot for cosmetic surgeons” and got £500 off the £3,999 price.

“I had to lose some weight before I went away. I had hip dips and was miserable after splitting with my ex and that meant I put on weight too. The fat jabs helped with that,” Sabrina said.

“If you try and lose hip dips at the gym you end up with muscly legs.”

She explained: “I went to Turkey because you can have loads of fat removed – more so than anywhere else in the world.”

“I had fat removed from my back, tummy, abs and hips and put back into my bottom. Six litres of fat was removed and I had one-and-a-third litres put back into each bum.

“I flew out last August. I didn’t realise it at the time that it’s one of the most life-threatening ops in the world. The risks for BBL surgery are at least 10 times higher than many other cosmetic procedures.”

Sabrina said: “I didn’t understand how complicated it would be either.

“While I recuperated in the aftercare villa I had fluids coming out of my body into bags I had to wear for four days. You have to squeeze the fluid out even after the surgery is done – it’s quite graphic and not for the faint hearted.

“When I flew back it was awful. Other girls had wheelchairs to meet them off the plane. I didn’t – I’m quite stubborn. I wish I hadn’t walked through the terminal because my feet swelled up.

“I had to wear a garment that sucked everything in and sit on a foam pillow which I had to take everywhere with me for months afterwards. Then there were the £500 worth of bum massages I had to pay for back in the UK too.”

“Now I’ve got my Brazilian Bum Lift. I’ve got to keep the weight off,” she insisted. “If I see some fat on my stomach I give myself a fat dissolving injection.”

She added: “While it was nerve wracking and I’m pleased with my bottom – I do want it bigger. 2020 might have been difficult for some, but for me it was the year I transformed my body.

“Now I get meal boxes delivered each week, I do go to the gym, but in reality I’m going back for round two this summer.

“I’m exercising more and watching my weight but if I see fat pop up I’ll zap it.”

Senior therapist Sally Baker at www.workingonthebody.com says: “The drive to have something done is something we’re all feeling at both ends of the age spectrum.

“But once you start altering your face and body then the benchmark moves. When you inevitably go onto the next procedure you’re not starting from zero. Instead the procedures tend to become more extreme.

“I work with those who have experienced trauma and I find that for many it is easier to address how you look and change your appearance than it is to talk about how you feel. These young women are never going to be happy if they don’t address their emotional issues first.”

“You’d hope these clinics and companies offering these procedures and creating these products would have a duty of care. It is quite lacking though and seems to be about the bottom line,” Sally added.

“There is no one talking sense to these young women. It’s just another example of lawlessness in this industry.”

How much has Sabrina spent in a year?

For more real life stories, one mum was horrified to find a gaping hole in her belly after undergoing a cut-price tummy tuck after giving birth.

Plus, one woman reveals she dumped her man and her best friend because her star sign told her to – and she admits it was a huge mistake.

And a 78-year-old woman who has been divorced SIX times reveals she met the love life of her while penniless at a bus stop and he’s now husband no 7.

I got second-degree burns from jaw-sculpting surgery to give me a thinner face, I might be scarred for life & can barely even talk