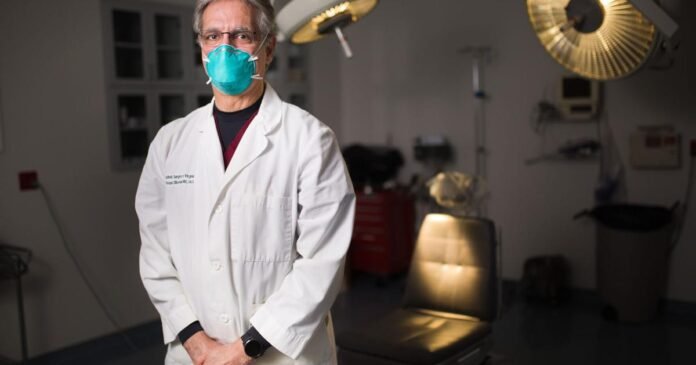 “I would not classify Roanoke, or the surrounding area, as a mecca of cosmetic surgery in the same way that you might think of Miami, Los Angeles, New York or even Charlotte,” he said. “But suddenly, for the first time in my career, I had cases booked three months in advance. And I mean filled up.”

Prior to the COVID-19 pandemic, Silberblatt said he had enough patients to make a decent living, but his weeks were never packed like other surgeons in his field. That all changed once vacations were canceled, schedules opened up and people spent more time on Zoom.

An article in the Facial Plastic Surgery & Aesthetic Medicine journal said the increased use of virtual platforms like Zoom has led more people to seek out cosmetic procedures.

Authors Shauna Rice, Dr. Emmy Graber and Dr. Arianne Kourosh, who practice in the New England region, noticed a surge in patients who said their appearance on Zoom was the reason they were seeking treatment, and have dubbed the trend “Zoom Dysmorphia”.

On Zoom and other video conferencing platforms, people have the chance to notice and evaluate their appearance like never before.

“What one sees on camera is an unedited, real-time version of oneself in motion, a self-depiction very few people are used to seeing on a daily basis,” the article stated. “During real-life conversations, we don’t see our faces speaking and displaying emotions, and we certainly don’t have the opportunity to pick ourselves apart like we do via video.”

Studies have shown that people are typically uncomfortable watching themselves on video. Unlike selfies, which offer flattering light and poses, Zoom videos force people to watch themselves in dim lighting and at unattractive angles.

Additionally, photos and videos taken at a closer distance tend to distort the way people perceive themselves and their facial features. Webcams record at shorter focal lengths, which can make the face appear to have wider set eyes, a broader nose, taller forehead and a rounded chin, according to the article.

These challenges have led to higher levels of body dysmorphia and seem to be drawing patients into cosmetic surgery offices.

Silberblatt, who leads Aesthetic Surgery of Virginia, said the past two years have been the busiest in his career and other plastic surgeons he knows from across the country have said the same.

He said his patients have cited how they look on Zoom as one reason they are seeking out procedures.

“They have mentioned looking at themselves on Zoom and having their little picture next to everyone else’s,” he said. “They were self conscious about that.”

Particularly in 2020, Silberblatt said his patients told him they finally had the time to complete a surgery they had always wanted to do. Activities and social functions were canceled and with the help of masks, people could heal in private. The money saved from canceled vacations was also sometimes redirected to cosmetic procedures.

Silberblatt said the most common procedures he performed were mini facelifts, breast augmentation and lipo abdominoplasty, which is a combination of a tummy tuck and liposuction.

He said the number of lipo abdominoplasty surgeries seemed to come from people being sedentary during the early days of the pandemic. Patients gained weight and wanted to recontour their bodies. Or they gained weight, lost it and then had extra skin.

Silberblatt plans to retire this year and is no longer accepting new patients. He said this likely caused some of the increase as his long-time patients wanted him to perform procedures before he retired. But it doesn’t explain the increased number of patients prior to his announcement.

Closures or rescheduled appointments happened due to the pandemic, but don’t account for the increase or busier schedule either, he said.

Get local news delivered to your inbox!