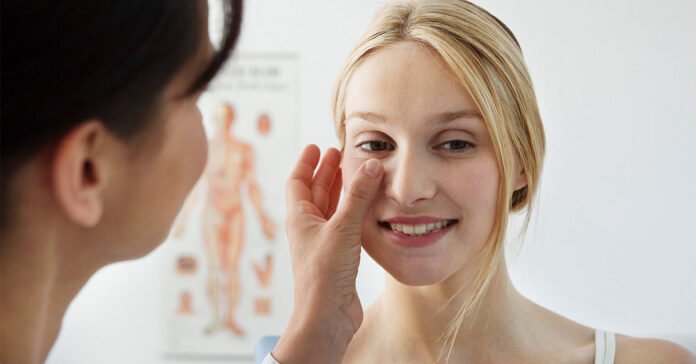 Some people like the distinction of a larger or wider nose, while others wish their noses looked a bit narrower.

If you’re hoping to narrow a wide nose, you have several options to consider. These range from a permanent surgical procedure to temporary contouring with makeup.

Read on to learn more about each one.

A rhinoplasty is the medical name for a “nose job.” It may be done to:

Rhinoplasties can also be performed for health reasons. For example, they can be done if you have trouble breathing or have frequent nose bleeds.

Before a rhinoplasty procedure, you’ll meet with your surgeon to discuss your desired outcome. It’s a good idea to show them pictures of noses you like.

The surgeon will also go over anything you need to do to prepare for the procedure. In the weeks before the procedure, you should avoid:

During the procedure you’ll be given anesthesia. Depending on the type of anesthesia you’re given, you may be awake but numb or totally unconscious.

If you’re hoping for a narrower nose bridge (the area above the nostrils), the surgeon will likely have to break the nose and reconstruct the bone. This is known as an osteotomy.

If you want your nostrils to look smaller, the surgeon will remove tissue from the area with small incisions that shouldn’t be visible post-surgery.

After your procedure, you may have to stay overnight in the hospital, depending on the complexity of your surgery.

If you’re discharged on the same day, be sure to have someone else drive you home.

You’ll need to keep your bandage on for about a week. Keeping your head elevated will also help reduce swelling.

Your doctor will tell you what specifically to avoid, but generally, you should refrain from:

Cost of a rhinoplasty

If you’re getting a rhinoplasty solely to narrow your nose, it’s unlikely that it will be covered by insurance, because it’s an elective cosmetic procedure.

A nonsurgical rhinoplasty is also called a “liquid rhinoplasty.” The procedure is done by injecting a filler, usually hyaluronic acid, into the nose.

Liquid rhinoplasties are best for changing the shape of the nose. Since a filler is added in and nothing is removed, it’s not the best option for narrowing a wider nose. It’s better for smoothing out bumps or adding volume to the tip of the nose.

Talk to your doctor about how you should prepare for the liquid rhinoplasty.

This type of rhinoplasty is an outpatient procedure, meaning you may have topical anesthesia to numb the nose, but you won’t go under.

The procedure is relatively quick, usually taking less than 45 minutes. You may feel pressure or a slight stinging, but it shouldn’t be painful.

After the procedure, you’ll be able to drive yourself home. The doctor will give you instructions on how to take care of your nose and what to avoid.

Cost of a liquid rhinoplasty

The results of a nonsurgical rhinoplasty are temporary and the procedure typically costs between $600 and $1500.

It’s unlikely to be covered by insurance because it’s an elective cosmetic procedure.

One of the easiest and quickest ways to narrow a wide nose is to contour using makeup. Of course, this isn’t a permanent solution, but it can be quite effective (and affordable!).

There are a lot of helpful YouTube videos on contouring that will show you how to make your nose appear narrower using makeup tricks.

Here are some basic step-by-step instructions:

There’s nothing wrong with having a wide nose, though some people wish their nose were a bit narrower.

If you’re one of these people, there are several options for narrowing your nose, ranging from the costly but permanent rhinoplasty to the inexpensive and temporary contouring with makeup.

If you’re considering a surgical or nonsurgical rhinoplasty, it’s a good idea to check in with your doctor to discuss the various options and figure out what’s best for you.

Not just for getting a youthful-looking face, botox is being used on the feet…