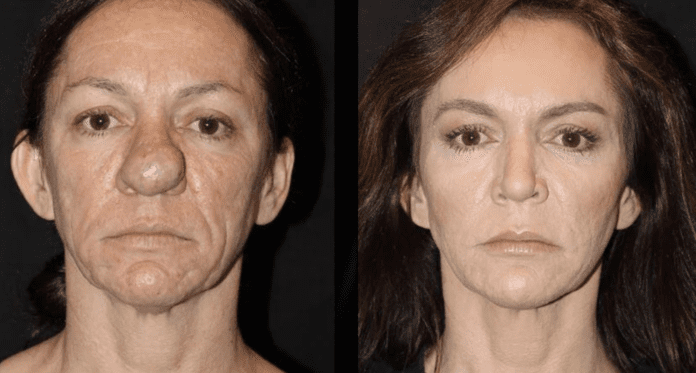 It’s called Rhinophyma and it’s an extremely rare skin condition that results from severe rosacea. The disorder manifests on the nose and over time can reshape it to appear more bulbous, bumpy, enlarged and red. For sufferers—like Eric O. who says he felt at ease during the mask mandates during the pandemic—it’s much more than an aesthetic concern but also a source of anxiety, embarrassment and a quality-of-life issue.

Fortunately for Eric and others like him, a handful of physicians across the country are finding nonsurgical ways to minimize the appearance of Rhinophyma to give patients their noses and faces back. While the condition flares up over time, for some it can feel like there is no return when initial treatments like creams or dermabrasion fail to work. Here, two Rhinophyma cases that prove it can be treated in the right hands.

By the time 57-year-old Eric. O found University of Miami dermatologist Alyx Rosen, MD he’d already seen several doctors and specialists, but to no avial. Dr. Rosen said she was committed to correcting the disfiguring Rhinophyma that was making him feel self-conscious. “I first noticed it getting worse about 10 years ago,” he explains. It wasn’t an overnight change as Eric’s rosacea on his nose has worsened gradually over the years after multiple flare-ups.

“Most people say that they’ll go through these episodes of flare ups,” explains Dr. Rosen. “During those flare ups, they’ll notice a lot of swelling, inflammation and breakouts on the nose. Then it will get worse. While those those episodes happen intermittently, those flare ups do exacerbate it.”

Although Eric had gotten used to how his nose appeared, he confessed that during the years of mask mandates he was secretly relieved he could hide his Rhinophyma from strangers. “It bothered some people to wear the masks, but it actually bothered me more when they said we didn’t have to wear them anymore,” says. It wasn’t long afterward that Dr. Rosen tackled his Rhinophyma head-on to achieve better results than he thought possible.

Treatment Plan
“I started him on doxycycline for the rosacea for three weeks before we went forward with the treatment,” explains Dr. Rosen. “It consisted of a combination of electrocautery to remove the excess tissue, followed by a CO2 resurfacing laser once the skin had healed to refine and finesse the surface. It’s taken about two months to fully heal and if needed down the line we’ll do another laser to refine even more.”

No More Hiding
“Now when my kids come over we can take selfies without me worrying or trying to hide my nose,” Eric shares. “When I go out bowling with my friends, a lot of people will come up to me and tell me how good my nose looks. It gives me more confidence being around other people.”

Baton Rouge, LA dermatologist Ann Zedlitz, MD first learned of Pamela’s unique case on an episode of The Doctors. As a child, Pamela had healthy skin, but in her teens she began to develop severe acne that made her nose red and purple. After the birth of her second child, she says, her nose became disfigured. Dr. Zedlitz only had three months before Pamela was set to return to the program, so she got to work with an aggressive treatment plan. “She had recently gone through some emotional distress that had caused her condition to get worse. Rhinophyma is more common in men and in patients in their 60s, but the rare disorder can happen to anyone with severe rosacea, no matter the age or gender.”

Dr. Zedlitz says the same things that trigger rosacea can also trigger Rhinophyma: “I always tell my patients to adopt an anti-inflammatory diet, because certain certain foods can make rosacea worse. Everyone’s triggers are different, but in addition to stress, alcohol and wind and sun exposure, some blue cheeses and red wines can also lead to flare ups. However, for this patient the triggers were emotional.”

Treatment Plan
“In three months time I was able to tighten her skin with Ultheraphy and debulk her nose with CO2 laser resurfacing,” explains Dr. Zedltiz. “A month later we redid the Ultherapy and laser resurfacing and a month after that I used fillers as well. We also included Accutane as part of her long-term treatment plan. It helped decrease the excess oil glands which helps avoid further flare ups. I also used Intense Pulse Light to target broken blood vessels that lead to redness and swelling.”

Long-Term Results
“I’m excited about the new me,” said Pamela when she returned to the show to reveal her amazing results. “I don’t have to hide behind my hair anymore.” Years later, Pamela continues to be a grateful, long-term patient of Dr. Zedlitz’s who has been able to continually improve her case over time.