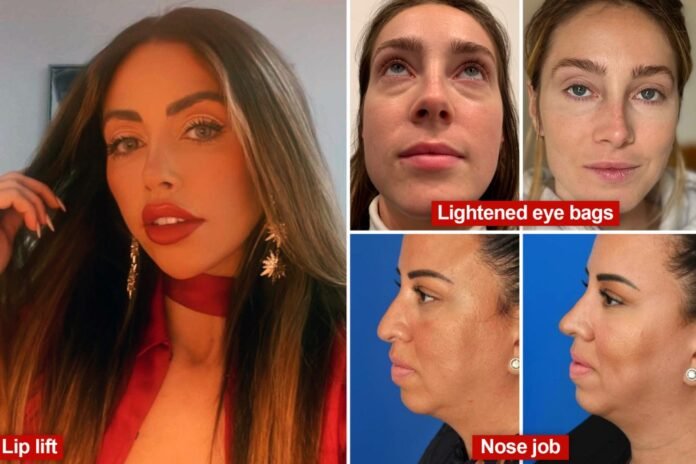 New Yorkers are going back to work with some new work.

Plastic surgeons and others who specialize in cosmetic enhancements says business has been booming. Many patients had intensive procedures early on in the pandemic when they could easily recover while working for home. In recent months, as people return to midtown and Wall Street high rises, they’re opting for quicker pick-me-ups.

“Now that people are back in the office or in a hybrid form, they’re wanting Botox, fillers, lighter maintenance lasers and peels,” said Dr. Robert Schwarcz, an Upper East Side-based plastic surgeon who has seen a 30% uptick in biz over the last six months.

Dr. Mojgan Fajiram, a cosmetic dentist on the East Side, has seen a similar uptick in business. “I’ve been in practice for 30 years — the last two years have been the most demanding we’ve ever had. People are willing to pay double, but I won’t allow it,” she said. “I’ve seen so many executives now. They want to have a perfect smile.”

Meet five New Yorkers who, fresh from pandemic procedures, can’t wait to show off the results to friends and colleagues.

A nose job on the job

Tammy Eloshvili, 39, from Sheepshead Bay, had wanted a nose job ever since she was 16 — but she put that dream on ice for nearly two decades as her family and friends assured her she looked fine. But, after the pandemic hit — and the executive assistant at an investment bank started to zoom in on her face during virtual meetings — she decided to go for it.

“I just wanted to finally fix it,” Eloshvili told The Post. So, in August of 2020, she paid $11,500 for a rhinoplasty from Upper East Side plastic surgeon Dr. Maurice Khosh. And, thanks to the flexibility of work-from-home, she didn’t have to take any time off.

“I got paid for the day. I literally told my boss the night before, ‘I’ll be out for a few hours. I have a doctor’s appointment.’” The next morning she went out of pocket and under the Park Avenue knife.

She returned to the office last October, and her colleagues are none the wiser.

“I notice some of them look and stare because they see something is different, but they can’t put their finger on it. They say, ‘You look great. You look amazing. Did you lose weight?’” continued Eloshvili, who is thrilled with the surgery. “I look and feel lighter and brighter.”

When Elise Dirito, 24, started traveling again in January for her job as a sales assistant, she wanted to lighten her baggage — specifically her undereye bags.

“I’ve had tired eyes ever since I was little. It’s been a huge insecurity of mine. I couldn’t even tell you the amount of times teachers would ask me if I was sick or tired. I tried all the eye creams, but nothing worked,” said Dirito, who lives in Noho. “I’m only 24 — and people [would] see pictures of me and say I look older than I am and, as a woman, that’s the last thing you want to hear.”

So, she turned to Upper East Side facial plastic surgeon Dr. Jennifer Levine, who used the injectable filler Radiesse to stimulate collagen to plump up her cheeks and the hyaluronic acid-based injectable filler Belotero in her undereye area to reduce bags.

And with her company’s new hybrid work model, she went on a mid-January weekday, during which she was able to do her job remotely.

“In the past you’d have to take a day off to see a plastic surgeon. I went on my lunch break. The injections took 15 or 20 minutes,” Dirito said of the treatment, which costs between $2,000 and $3,000. She worked from home for two weeks while her bruises heeled, wore a mask, sunglasses and turned her camera off for Zoom meetings.

She’s pleased with the results, and no longer relies on concealer to look refreshed.

“It’s about feeling better in your own skin with a little bit less effort,” she added.

Early in the pandemic, Scott Levy, a 49-year-old executive coach who lives on the Upper East Side, opted for custom, handmade porcelain veneers on his top teeth for a cool $25,000.

Now that the masks are off, he’s heading back to cosmetic dentist Dr. Mojgan Fajiram this Wednesday to get his bottom teeth done.

“I used to be able to hide behind the mask, but now that we’re not wearing them anymore, I can’t,” Levy said. He was initially hesitant to drop another $25,000, but he’s been pleased with how his top teeth look and wanted to complete the set. “Now that I’m going to be part-time in the office, I said, ‘Let me fix the bottom teeth.’”

At the start of 2022, Hana Ajjuri, 30, began to take more and more in-person meetings with clients, initially with masks, and she was motivated to finally get the upper lip procedure she’s long considered.

“I had lip filler in the past and it didn’t give me the lift I was looking for. This is something I’ve been wanting for a while — it’s a problem area that’s a little elongated and I’m front and center in front of people all day,” said Ajjuri.

The Chelsea resident had the procedure, which shortens the distance between your nose and upper lip, in early February, and was able to conveniently heal behind her mask. Now that mandates have lifted, she’s showing off the results.

“All of my colleagues were like, ‘You look different, but we can’t tell what it is,’” she continued.

The $5,000 procedure was definitely worth it. Ajjuri has jumped up in the nationwide rankings of her company’s sales reps, climbing from the 30th to 14th spot this past month.

“I can’t say it’s just from this [lip lift], but I do think when you’re more confident and you feel better, it just puts you in a better mood that makes a huge difference,” she added.

James Palese, 59, a hairdresser at Warren Tricomi in East Hampton, geared up for mask mandates to be lifted with a non-surgical neck lift.

“I noticed wrinkles, sagging and drooping so I redid my neck two months ago … I said, ‘It’s time for a tune-up,’” Palese, who sees as many as 20 clients per day, told The Post. “I am in the public eye and they’re looking at me — my hair, my face and how I look — just as much as I’m making them feel good.”

Palese paid a visit to Dr. Kenneth Mark, a cosmetic dermatologist with practices in New York City, the Hamptons and Aspen, for an hour-long session of Ultherapy, a non-surgical ultrasound-based face and neck lift that typically costs $3,500 and requires no downtime to recover.

He also spent about $1,500 on getting the filler Voluma in his cheekbones and jawline to add a little lift and volume, and put down another $1,200 for Botox in his neck and jawline.