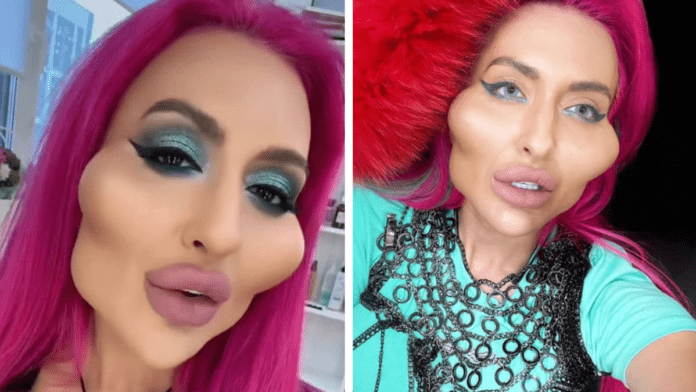 A woman with the ‘world’s biggest cheeks’ has shared a picture of herself before surgery – and it is fair to say she looks incredibly different.

Ukrainian model Anastasia Pokreshchuk has spent more than £3,000 (£2,500) on facial fillers and Botox over many years to achieve her look.

The model has kept fans updated on her Instagram page on her beauty transitions, and has shared some pictures of herself prior to her surgeries.

In a recent post accompanying a picture of her younger self, Pokreshchuk said: “Honestly, I don’t understand people who say I looked better before”.

The posts have received a mixed reception from fans, with one person saying: “You were so beautiful before.”

While someone said that they ‘would not recognise’ her younger self.

But a second added: “There was a young girl and she became a confident, bright and beautiful woman. Well done.”

To maintain her title, Pokreshchuk often has procedures and has even shared with her followers footage of her undertaking it.

Earlier this year, she recorded herself injecting liquid into her lower jaw – with the model showing signs of obvious pain.

Pokreshchuk has previously admitted that the procedures she has such as self-injecting filler are dangerous, but she ‘loves’ having it – so won’t be stopping anytime soon.

She previously said: “After I had the injections and saw the changes in my cheeks, I fell in love with them. I understand that they look weird for other people but I don’t mind.

The model has also said how the expensive cosmetic surgery she has undergone has improved her confidence, saying that previously she would not have posted pictures of herself on social media.

“I was ashamed of everything; my voice, my appearance. It was really hard work,” she said.

“I think I was ugly before. My mum thinks that I was naturally beautiful before, but now thinks I look more exotic and my friends say my new appearance is better because before I looked like a grey mouse.

“I’ve had people tell me I am an ugly b**** and that I should kill myself but when I see it I just laugh it off and ignore it.”

Like Pokreshchuk said, she has received a lot of criticism since she started posting her journey on social media, but that doesn’t seem to be stopping her.