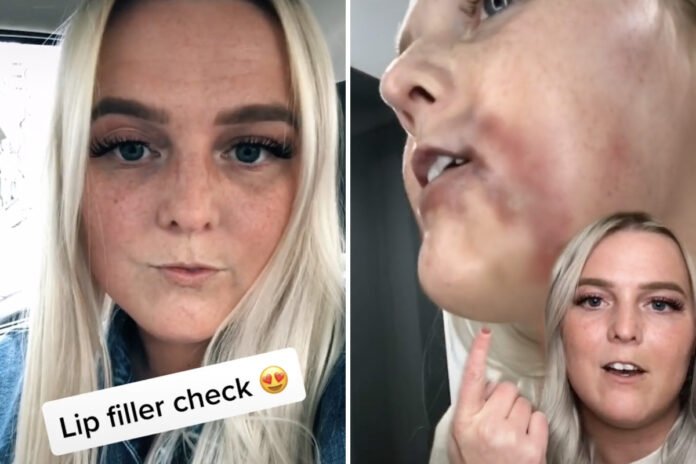 A WOMAN said she’s been left “traumatized” after lip filler caused nightmare bruising on her face.

She said she needed 25 syringes to dissolve the injections, after they created blocks in her face.

The plastic surgery horror story was shared by TikTok user @paige__nicole, whose name is Paige Roberts, according to her profile.

Telling the story, Paige said she got lip and filler five days ago – but no longer has it.

She said “I’m traumatized” and she’s still bruised after the injections went wrong.

“They are nonexistent,” she said as she responded to people commenting on her lip shape.

“That’s why I’m trying to get lip filler I literally just want a top lip!”

In her next video, she said she’s been “super insecure” about her lips her entire life.

Paige said she went to an injector to get filler, and they agreed to do one syringe, along with a bit of botox to do a “lip flip.”

“About 3/4 of the way into the syringe, my bottom lip started bruising just a little bit more and the swelling was getting pretty bad so just decided that we were going to stop it there…” Paige recalled, saying she and the injector agreed to put the rest of the filler in her chin.

She showed a picture of her lips after the appointment, saying : “I loved them.”

However, she said it quickly turned.

She shared a snap of her lips two after the appointment, with some bruising on her lips.

Paige then showed a video from four hours after she got the injections – with bruising on her chin.

She said right after she showed her injector the bruising, she was told to go back to the office and get the filler dissolved.

Her injector told her she thinks she had what’s called a vascular occlusion.

According to NCBI, a vascular occlusion happens when blood can’t pass through a blood vessel.

“I got complete blood flow back and she sent me back home,” Paige said.

However, when she got home, she started bruising again – this time above and below her lip.

She had to go back to the injector again, to get more dissolvant injected.

“I sat in a chair from about 12:30 to about 5:30am Sunday morning getting about 25 vials of Hylenex injected into my face,” she said.

She then shared another video, showing the lower half of her face totally bruised.

Even after the 25 vials, Paige said the bruising showed “there was still some sort of blockage that was not able to be found.”

Her injectionist was worried, however, and referred her for an ultrasound on her face.

“They did find multiple blockage points, all in different areas,” she added.

“Once they found those blockage points using the ultrasound they were able to inject them with Hylenex to go ahead and dissolve that filler and I got immediate blood flow back to my facial tissue,” Paige said.

She shared a video from the morning after, and the day after the injections – revealing her face was purple all around her mouth and chin from bruising.

Paige said they found arteries or nerves in her chin that seemed out of place from where they should be.

“When I got injected chin filler, it kind of hit right into it,” she said, adding that it “kind of went all over my face” and led to the bruising.

“That doesn’t mean that’s the injectors fault,” she said, acknowledging that it’s something you sign off that could happen when you get the fillers and agree to them in paperwork.

“Long story short, lip fillers are not meant for me and I’m just meant to have baby a** lips for my whole entire life,” Paige concluded.

Being forced to carry vaccination passports is sinister and Orwellian

One Brit warned people from going overseas for cheap treatments after she had six liposuction treatments in one go.

Check the six things you must ask yourself before deciding to go under the knife.

From ‘dying’ in an anti-aging chamber to matching surgery, the extreme beauty regime of the World’s Most Identical Twins