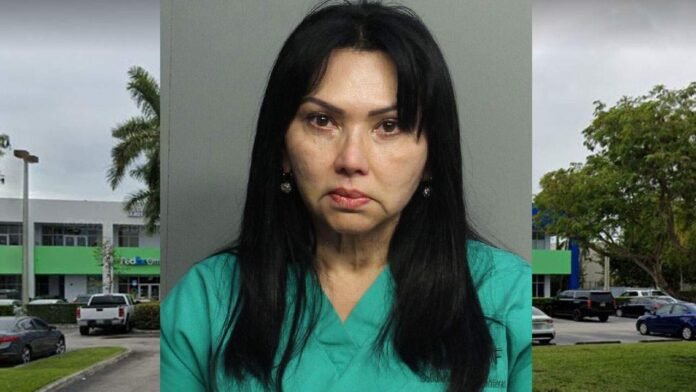 DORAL, Fla. – Officers arrested a woman who is accused of practicing medicine without a license, as she performed a procedure on a patient on Thursday at a private office in Doral.

Alcalira Jimenez, 56, was working at the Millennium Antiaging & Surgery Center, 1450 NW 87 Ave. An officer said Jimenez tensed her arms and pulled away before he handcuffed her and escorted her to a patrol car.

More than a year before the arrest, a man told police officers that on Feb. 15, 2020, he visited Millennium Antiaging & Surgery Center because he wanted a nose job.

The man said he used a credit card to pay $2,000 for rhinoplasty surgery. He said he was awake while Jimenez performed the surgery, according to the police report.

The man told officers that he returned to the Millennium Antiaging & Surgery Center on May 30, 2020, and paid $800 for another rhinoplasty surgery with Jimenez. He was awake again.

“Throughout the following months of recovery, the victim realized his nose was not healing properly and appeared deformed,” the officer wrote in the report.

The man told officers he contacted Jimenez to obtain her medical license number and medical malpractice insurance information, and she was unable to provide it. He said that’s when he decided to report her to authorities.

The detective collected statements, photographs, and evidence of bank transactions, and also contacted the Florida Department of Health. The agency provided the detective with a certificate of non-licensure.

On Facebook, she lists herself as the owner and founder of the Millennium Antiaging & Surgery Center.

Records show Jimenez has been the registered agent of Milenium Corp. since 2014 and Millenium Medical PA, Inc. since 2018. The articles of incorporation for Milenium Corp. included the address of a plastic surgery office in Venezuela.

On Linkedin, she claims to have earned medical degrees from the National Autonomous University of Mexico and the National Experimental University Francisco de Miranda in Venezuela. She lists other training and touts nearly three decades of experience.

Records show Jimenez was at the Turner Guilford Knight Correctional Center on Thursday evening. She is facing charges of practicing medicine without a license and resisting an officer without violence. Her bond is set at $6,000.