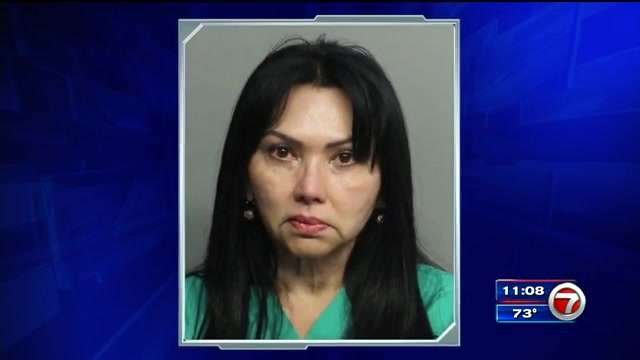 DORAL, FLA. (WSVN) – A South Florida man is outraged and sharing his story after he went under the knife for a woman who, police said, was practicing plastic surgery without a license and is now facing felony charges.

Speaking with 7News on Thursday, Vincenzo Zurlo said his surgery went from a nose job to a nightmare.

“The pain is incredible. It is here. It’s a pain that never goes [away],” he said as he pointed to the bridge of his nose. “She pretended to be a doctor, but she was not.”

Shortly after surgery, Zurlo said, he began experiencing excruciating pain, along with deformities to his nose.

When he went back to Jimenez de Rodriguez for treatment, she suggested another surgery, which he agreed to, but he said the second surgery made his nose worse.

“My nose wasn’t right. I had this lump close to the tip of my nose, and she was finding excuses,” he said. “Then [she said] it was ‘liquid accumulated,’ but no, it was not. It was something that was wrong.”

After suffering a year in pain, Zurlo called the Florida Department of Health to report the “doctor.” He found out Jimenez de Rodriguez was not a doctor and did not have a license.

That’s when Zurlo called police. When they showed up at the clinic, they found the suspect in the middle of surgery.

“We went in, and we interrupted the procedure, and we basically identified ourselves as police officers and took her into custody,” said Doral Police spokesperson Rey Valdes.

Jimenez de Rodriguez’s office has since been shut down by the City of Doral, and she is facing felony charges of practicing medicine without a license.

As for Zurlo, he’s out thousands of dollars, but he is hoping his experience can be a lesson to others who choose to have surgery.

“I feel abused. I feel that somebody used me as a piece of meat, just because she decided that one day she would like to play a plastic surgeon,” he said. “No, we are in the great United States over here, and if you want to do what you are good to do, get your license, go to study and don’t play with the human life.”

Zurlo said he will be undergoing corrective surgery soon.

Investigators are asking any former patients who believe they were victims of the suspect to call Doral Police at 305-593-6699.

Copyright 2021 Sunbeam Television Corp. All rights reserved. This material may not be published, broadcast, rewritten or redistributed.