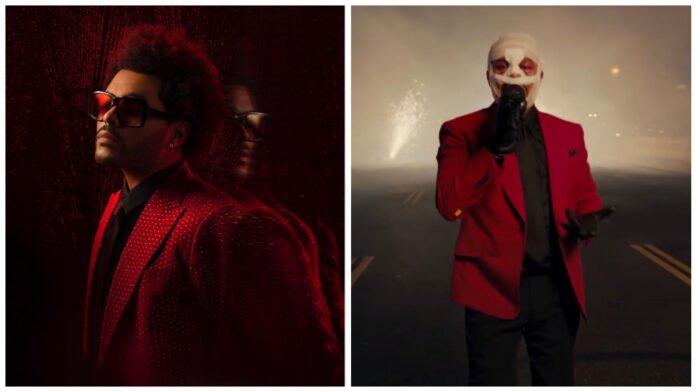 In the weeks leading up to the Weeknd’s performance at the Super Bowl LV Halftime Show this Sunday, many people have commented on the full-face bandages he’s worn in recent photos and during his performance on the American Music Awards. Variety caught up with the Weeknd this week during a break from Super Bowl rehearsals and asked a few questions about them (his answers appear below), but first, a little backstory:

Back in November of 2019, the Weeknd launched his “After Hours” album cycle with a pair of songs — the smash singles and videos “Blinding Lights” (which was Variety‘s Hitmakers Record of the Year) and “Heartless” — that began the red-jacketed, busted-nose character and his bad-night-in-Las-Vegas storyline that has continued through many of his videos, TV and awards show appearances.

The Weeknd spoke with Variety about the videos in our cover story back in April, but didn’t reveal much: “This character is having a really bad night, and you can come with your own interpretation of what it is.” That bad night starts off with a few too many drinks and a fight, but then the story becomes more surreal, apparently involving possession by an evil spirit, decapitation and more.

And just when the bandaged-nose started to seem normal, the Weeknd appeared with his face fully wrapped in bandages during his literally explosive appearance on the American Music Awards in November, like a person who’d just had plastic surgery — and the “Save Your Tears” video made it look like that’s exactly what happened. However, his new Super Bowl ad, released Tuesday, shows him looking completely normal.

Over the past few weeks, the internet has been full of chatter, memes and confusion, with many fans wondering what the bandages mean, and whether he will continue the theme at the Super Bowl. What’s going on? The Weeknd answers a few — but by no means all — of our questions below.

Your “After Hours” character has been increasingly more bandaged, with an entire head bandage at AMAs, and is now evidently post-plastic surgery. People have been speculating about this for weeks — what does it symbolize or mean?

The significance of the entire head bandages is reflecting on the absurd culture of Hollywood celebrity and people manipulating themselves for superficial reasons to please and be validated.

Can you give any insight into how the bandages fit into the original “bad night in Las Vegas” storyline?

It’s all a progression and we watch The Character’s storyline hit heightened levels of danger and absurdity as his tale goes on.

What can we take from the fact that you seem to be intentionally making your face increasingly unattractive while promoting your biggest album?

I suppose you could take that being attractive isn’t important to me but a compelling narrative is.

Sometimes you appear in photos or on TV and videos in character, sometimes not. Why?

Why not play with the character and the artist and let those lines blur and move around?

Are you in character now?