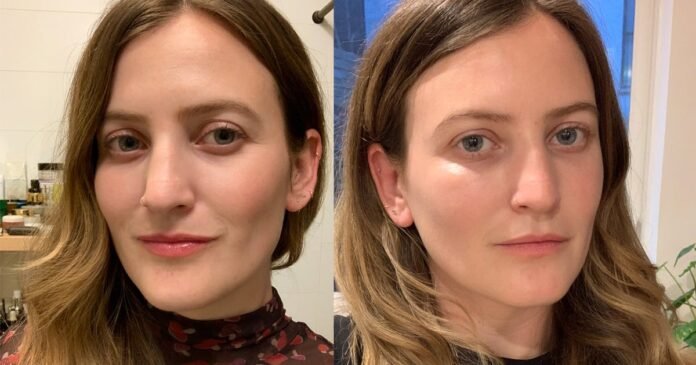 I didn’t grow up trying on my mom’s lipstick or learning passed-down beauty secrets. A California flower child through and through, my mother has always been all about aging naturally, so things like Botox, dermal fillers, plastic surgery, or any other face-altering procedures were, if I’m being honest, scoffed at in my family for the majority of my life, written off as things that only serve to make older people look silly.

Of course times have changed, even since I graduated from college nearly 10 years ago. Now, injectables have become much more of the norm, and after about five years working in the beauty industry (and turning 30 last year), the pull toward trying filler has become all but impossible to resist. I was especially moved to do so after seeing a photo of myself with my mom during a yoga retreat in Mexico. I’ve always had puffy undereye bags and some discoloration — it’s genetic, and has never really bothered me. However, the two deep AF wrinkles that appeared under my eyes that radiated out toward my cheeks put me over the edge. TBH, I felt like my nightmare of developing Steve Buscemi eyes was coming true.

Since I noticed them, the wrinkles have become a daily source of stress for me. I’ve tried many different eye creams to no avail, and concealer always seems to settle in those wrinkles by midday, making them even more pronounced. I decided it was time to explore the world of undereye fillers — to which my very progressive and cool mom said, “It’s basically the same as self-care, right?” Not gonna lie, I felt very proud of how far she had come in her feelings about skin care.

What Are Undereye Fillers Made Of?

Dermal fillers sit underneath the surface of the skin and are meant to plump, smooth, and sculpt. Fillers can be made from several different substances, the primary being hyaluronic acid, a naturally occurring substance in your skin that helps to add volume and hydration (more on that later), while others can be made of collagen, calcium hydroxylapatite, or Poly-L-lactic acid. Many of them will sometimes include a little bit of lidocaine to help numb and offset the pain. You can check out the FDA’s website for a full brief on each material.

There are several different types of HA-based fillers that are used depending on the area of the face being injected and your overall facial structure. The most common come from three overarching families: Juvederm, Restylane, and Belotero. Each filler’s formulation differs based on where it’s meant to be injected and what result you’re looking for — one isn’t necessarily better than the other, so your doctor should talk you through why they’ve chosen a specific type. For most undereye procedures, Dr. Marmur said she uses Restylane because it works primarily to smooth out wrinkles and folds.

If for some reason you don’t like them, your doctor can inject hyaluronidase and within 48 hours the filler will dissolve.

What Can (and Can’t) Undereye Fillers Do?

Common concerns that plague the undereye area are fine lines, discoloration, hollowness, and puffiness — and sometimes all of them combined. Let’s start with what fillers can help: wrinkles. These come with age — as you get older, your skin starts to thin and your bones and fat begin to dissolve. “By putting fillers under the eyes, you can actually lift and shift the skin,” said Dr. Marmur. “We add filler so that your skin has something to slide over smoothly instead of creating a wrinkle. You’re making less wrinkles and shifting them to radiate out where they should, which is outside your face, not down your cheeks.”

Puffiness, not so much. “Puffiness is technically what fillers shouldn’t be able to fix, but we can obscure puffiness by sculpting and supporting the skin,” said Dr. Marmur. The type of puffiness that is not affected by fillers is what’s called festooning. “Festooning means there’s a distinction, like a seam, between the under eyelid skin and the cheek,” she said. “Let’s say you had too much to drink the night before or you had salty soy sauce with your sushi, you’re going to retain water in your face and it’s going to get trapped in your under eyelids, called a festoon. Fillers can’t fix this.”

Discoloration — or dark circles — faces a similar fate when it comes to fillers. If the pigmentation is caused by thin skin sitting on top of purplish muscle and blood vessels, then you can add a layer of filler between the skin and the muscle that will cushion the color. “You’re just adding a layer that creates a nicer reflection of light off the face and some illumination,” said Dr. Marmur. Likewise, if the darkness is being caused by a hollowing out of your bone (which just comes with age), fillers can plump that back up. What fillers cannot fix is pigmented skin itself.

What Can You Expect During the Undereye Filler Procedure?

When you arrive, you’ll immediately apply a numbing cream to your undereye and cheek areas. Because most HA fillers have lidocaine in them, prepare to be numb for multiple hours (fun fact: the lidocaine can make your eyes a little twitchy, so, no, you’re not having a seizure). Your doctor will then come talk to you about your goals, what you’re most concerned about (hollowness vs. wrinkles, for example), and chat through the type of filler they’re going to use.

The procedure itself took about 10 minutes. I wouldn’t say it hurt (if it does, tell your doctor), but it felt very weird, like a slug slowly moving under my skin — mostly it felt like low-grade pressure. Dr. Marmur opted not to use a needle — she went with the cannula method, which uses a thin, flexible tube with a rounded, blunt top to inject the filler. Yes, it sounds pretty scary, but it’s actually a much less invasive procedure than poking a needle into several places under your eyes. With the cannula, your doctor makes one single hole and moves the cannula around to place the filler in multiple places. “Unless you’ve had a lot to drink the night before, the cannula approach makes bruising pretty unusual,” said Dr. Marmur.

What Is the Downtime and Aftercare?

I was numb for about five hours after Dr. Marmur sent me home, and I definitely felt a bit tender. Once the lidocaine wore off, I felt a little sore and headache-y, but it didn’t stop me from falling asleep like normal. I was quite swollen the next day (keep scrolling for a pic), which Dr. Marmur said is normal.

“Some people have zero swelling, some people have mild swelling for three days, and some people have swelling for two weeks,” she said. “It’s all about a histamine reaction that some people get. I tell people if you’re the kind of person who gets a mosquito bite that’s like a monster, you will be more swollen than the regular person.” Dr. Marmur recommended taking an antihistamine and doing some cardio exercise to help get rid of swelling. She also said to avoid a lot of salty stuff on the day you have your procedure and the day after, and to avoid drinking the night before or taking blood thinners like Aspirin and Advil.

Dr. Marmur said that even certain supplements like vitamin B12 and fish oils can cause more bruising, as well as other homeopathic things like ginkgo biloba, so bring a list of everything you’re taking with you to your appointment. She also said to avoid being too hot, so stay away from a hot tub, sauna, or a hot yoga class the same day of your treatment and while you’re swollen. “Being hot dilates blood vessels which can increase bruising,” Dr. Marmur said.

The fillers also take a minute to “settle” — basically where they’re actually going to sit on your face long-term. They can also feel a little lumpy under your skin, but the fillers will smooth out on their own. Settling can take anywhere from one day to two weeks, said Dr. Marmur. No matter what, you should schedule a follow-up for two weeks after your treatment so your doctor can make sure everything is looking perfect.

How Long Do Undereye Fillers Last?

Unlike lip filler, which lasts about six months, the effects of treating your undereye area lasts much longer. “That’s one of the best, most gratifying things about fillers under the eyes,” said Dr. Marmur. “It lasts a very long time — sometimes for years and years.” Because the undereyes aren’t a very highly trafficked area of the face (as opposed to the lips, for example), it takes longer for the body to gradually absorb the hyaluronic acid particles. Usually undereye fillers last around a year.

What Should You Look For in a Doctor?

You should make sure you’re going to a board-certified dermatologist or board-certified facial plastic surgeon. This isn’t the time to use your Groupon or go to a MedSpa. “The doctor shouldn’t be pushy,” said Dr. Marmur. “It should be somebody who you feel is not a salesperson, and who is really there because they love the art of doing this. Also, somebody who likes the ‘less is more’ approach. You need to get a sense that you trust that they’ll take care of you if something goes wrong and that they can talk to you from experience.”

Dr. Marmur said she thinks it’s a good thing that procedures like dermal fillers and Botox are more readily available, but you should still treat it in the same way as any other medical procedure ‚ i.e., go to a doctor’s office not a mall kiosk. “There’s a lot of trust transfer going on here,” she said. “It might seem like we’re in this new age where a lot of the mystique has fallen from doing fillers and Botox. I’m happy because it allows people to ask questions. There’s nothing vain about it, it’s self-care, and it’s healthcare as well. You have to understand you’re taking a leap of faith and that you really need to feel like that person is legit.”