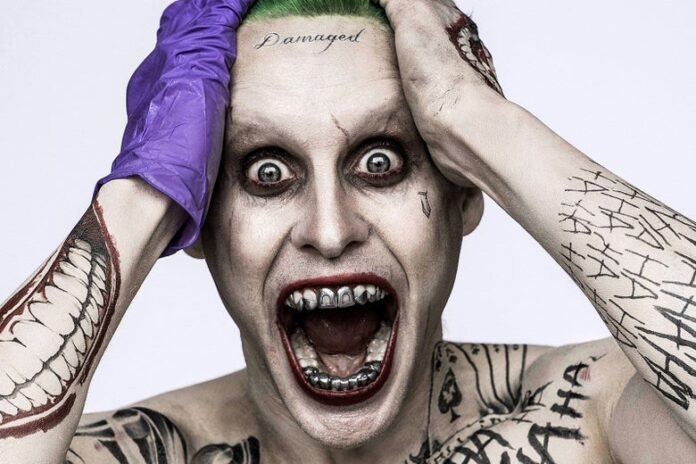 It’s not yet clear what the exact differences between 2017’s original release of Justice League and its upcoming director’s cut (aka “the Snyder Cut”) will be, but the images and trailers released thus far make one thing clear: Jared Leto’s Joker is sporting a new look, one devoid of the much–ridiculed “Damaged” forehead tattoo he had in his previous appearance in 2016’s Suicide Squad. Given the tattoo’s (literally) front-and-center position, this is a noticeable cosmetic change. We were curious: Would the Joker really be willing to sit for that tattoo in the first place, let alone go through with lasering it off?

To answer these questions and more, we spoke to tattoo artist L’ain Freefall; Dr. Roy G. Geronemus, director at the Laser and Skin Surgery Center of New York; and Jeff Garnett, CEO of Clean Slate Laser Tattoo Removal Centers, via email about the process of getting such a tattoo and of getting it removed. Below, we share what we’ve learned.

The best of movies, TV, books, music, and more, delivered to your inbox three times a week.

Would it hurt to get a forehead tattoo?

Everyone is different in terms of what’s painful for them, and body parts vary when it comes to sensitivity. That said, Freefall noted that the forehead, especially closer to the hairline, could be a sensitive spot, and that getting a tattoo on the crown of one’s head isn’t always the most comfortable experience.

How much would getting a forehead tattoo cost?

Studios and artists vary in cost, and they can charge differently depending on whether costs are calculated by an hourly rate, by piece, or even by set day rate. However, said Freefall, “Most studios will charge more for hands, neck, and face, due to the high-risk factor. These are not areas all tattooers are comfortable tattooing, and that can be because of experience or just the unnecessary stress.” She quoted $200 as her personal minimum charge for a facial tattoo, while Byrdie’s guide to tattoo costs cites $500 as a base estimate for “lip/face” tattoos. What’s most important to keep in mind is that the fact that one tattoo artist or studio may charge more than another doesn’t guarantee higher quality. “Do yourself a favor and research,” Freefall advised. “Look through work and see what feels good for you.”

For the Joker’s “Damaged” tattoo in particular, Freefall wrote that she would likely charge closer to $300 for it, but that she would also advice against getting that ink in the first place. “That tattoo looks like it’s just been slapped [on],” Freefall observed. “It could look like this if he had gone to any person with no knowledge or care. You have to consider the person’s hairline, shape of face etc. We’d have to discuss what the overall look he wants and I’d advise on options and explain why perhaps different placement and lettering style would look better. As a tattooer/artist, we have a responsibility to make sure this tattoo will suit you and look good.”

How long would the “Damaged” tattoo take to complete?

Generally speaking, the smaller the tattoo, the less time it will take. Were they not facial tattoos, Freefall estimated that the Joker’s tattoos wouldn’t take more than 40 minutes. Their location, and the extra care involved, would likely stretch out the process, though a good chunk of time would also likely be spent placing stencils “depending on the shape of the head/face.” But, ultimately, the timing would depend on the artist and on the customer, taking their movement and stress into account.

OK, now we know a little more about what getting a tattoo on your forehead takes. What about getting it removed?

Understanding how a tattoo gets removed involves understanding why tattoos last in the first place. “Tattoos are permanent because the ink particles are too large for your body to break down,” wrote Garnett. “Just like any other toxin, your body knows the ink isn’t supposed to be there and tries to break down the ink, it would just take more than a lifetime for your body to accomplish breaking the ink down on its own. […] We are just expediting this natural process.”

As for how that’s accomplished, according to New Look Laser College, “tattoo removal lasers produce pulses of light energy,” which penetrate the skin and are absorbed by the tattoo ink. “The laser doesn’t remove the tattoo,” explained Garnett, noting that it is a common misconception that lasers burn tattoos off of the skin. “Rather, [the laser] breaks it into tiny particles that are small enough for the body’s immune system to remove naturally.” This is all done after applying local anesthesia, Geronemus wrote, and different lasers would be employed depending on the color of ink being removed and the patient’s skin type.

Luckily, as per Geronemus, it should not, with the local anesthetic going a long way toward minimizing discomfort. Still, Garnett noted that laser tattoo removal treatments, though generally done very quickly, could be painful, comparing the sensation to “being snapped with a rubber band, bee stings, bacon splatter or pinches.” Garnett also added that newer technology uses less heat, and that his company Clean Slate uses a cryotherapy machine that “blows freezing cold air onto your skin while lasering” as well as numbing creams and ice packs to help manage the pain.

How effective is it? Will the Joker ever be completely un-“Damaged”?

In some cases, a slight shadow will remain, or the skin in the area where the tattoo was will be slightly lightened. In the case of the Joker’s tattoos, Geronemus wrote, they “will likely be removed cleanly and I would not expect residual pigment or any loss of pigmentation from the treatment itself.”

How long would the tattoo take to get rid of?

Laser tattoo removal is conducted over sessions, rather than all at once. Because the Joker’s tattoos appear lighter in color, their removal would likely take three to five sessions, with each session lasting “just several minutes” given their small size. According to Garnett, black lettering tattoos usually take five to eight sessions to remove. For something so relatively small as the Joker’s tattoo, treatments would likely last just 30 seconds, but could only be done every 12 weeks, to avoid scarring.

And how much would removal cost?

Just like the cost of getting a tattoo, the cost of getting one removed can vary based on everything from the tattoo’s size to the geographic location of the laser removal center. The Laser and Skin Surgery Center of New York charges by treatment size, and so the Joker’s relatively small facial tattoos would cost $450–$600 per session, meaning that the Joker could be looking at a bill of anywhere between $1,350 to $3,000. Clean Slate, meanwhile, charges $200–$600 per session depending on the size of the tattoo, but Garnett estimated that the Joker’s facial tattoos would be $400 per session, bringing the Clown Prince of Crime’s costs to $2,000–$3,200.

One last question: Why would the Joker want to get rid of his facial tattoos in the first place?

Of course, we can’t speak for him, but Geronemus noted that patients’ reasons are myriad: “Professional reasons, new jobs, military requirements, new parents do not want their children to see the tattoos, children who get tattoos and their parents want them removed, names no longer in favor, traumatic tattoos (road rash) can be unsightly, bad artwork to name a few.” Most of these reasons don’t seem very Joker-y, but given the tattoos’ generally negative reception, maybe his reason was as simple as regret.