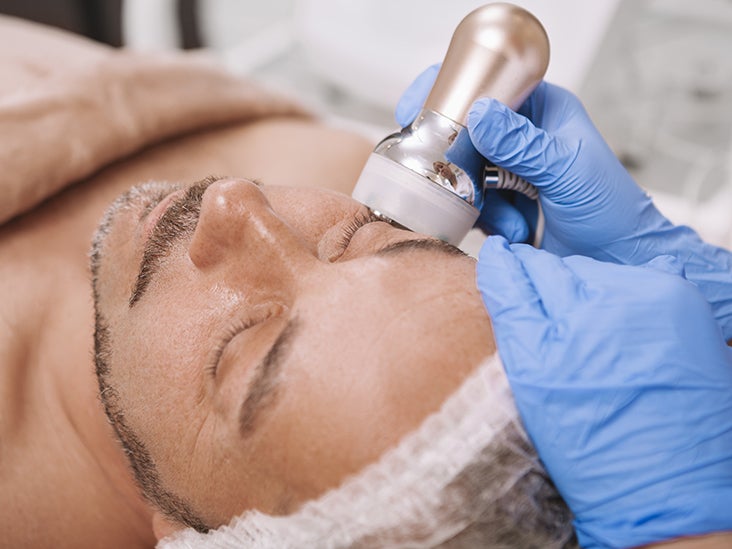 A high intensity focused ultrasound facial, or HIFU facial for short, is a noninvasive treatment for facial aging. This procedure is part of a growing trend for anti-aging treatments that provide some of the benefits of a facelift without the need for surgery.

According to the American Society for Aesthetic Plastic Surgery, nonsurgical procedures increased in popularity by 4.2% in 2017.

These less invasive treatments have a shorter recovery period than surgical options, but the results they provide are not as dramatic and do not last as long. Due to this, dermatologists recommend HIFU only for mild-to-moderate or early signs of aging.

In this article, we take a look at what the procedure involves. We also examine how effective it is and whether there are any side effects.

A HIFU facial uses ultrasound to create heat at a deep level in the skin. This heat damages targeted skin cells, causing the body to try to repair them. To do this, the body produces collagen to aid in cell regrowth. Collagen is a substance in the skin that gives it structure and elasticity.

According to the American Board of Cosmetic Surgery, nonsurgical ultrasound treatments such as HIFU can:

The type of ultrasound that this procedure uses is different than the ultrasound that doctors use for medical imaging. HIFU uses high energy waves to target specific areas of the body.

Specialists also use HIFU to treat tumors in much longer, more intense sessions that can last for up to 3 hours in an MRI scanner.

Doctors usually begin HIFU facial rejuvenation by cleaning the chosen area of the face and applying a gel. Then, they use a handheld device that emits the ultrasound waves in short bursts. Each session typically lasts 30–90 minutes.

Some people report mild discomfort during the treatment, and some have pain afterward. Doctors may apply a local anesthetic before the procedure to help prevent this pain. Over-the-counter pain relievers, such as acetaminophen (Tylenol) or ibuprofen (Advil), may also help.

Unlike other cosmetic procedures, including laser hair removal, HIFU facials do not require any preparation. When a session is over, there is also no recovery time, which means that people can get on with their daily activities after receiving HIFU treatment.

People may require between one and six sessions, depending on the results they want to achieve.

Many reports say that HIFU facials work. A 2018 review looked at 231 studies on the use of ultrasound technology. After analyzing the studies that involved ultrasound for treating skin tightening, body tightening, and cellulite reduction, the researchers concluded that the technique is safe and effective.

The American Board of Cosmetic Surgery say that ultrasound skin tightening usually produces positive results in 2–3 months and that good skin care can help maintain these results for up to 1 year.

A study on the effectiveness of HIFU facials in people from Korea found that the procedure worked best to improve the appearance of wrinkles around the jaws, cheeks, and mouth. The researchers compared standardized photographs of the participants from before the treatment with those from 3 and 6 months after the treatment.

Another study evaluated the effectiveness of a HIFU facial after 7 days, 4 weeks, and 12 weeks. After 12 weeks, the participants’ skin elasticity had significantly improved in all the treated areas.

Other researchers studied the experience of 73 women and two men who underwent HIFU facials. Physicians evaluating the results reported an 80% improvement in facial and neck skin, while the rate of satisfaction among the participants was 78%.

There are various HIFU devices on the market. One study compared the results from two different devices by asking clinicians and people who had undergone HIFU facials to evaluate the effects. Although the participants reported differences in pain levels and overall satisfaction, the researchers concluded that both devices could effectively tighten the skin.

It is worth noting that each of the above studies involved only a relatively small number of participants.

In general, the evidence suggests that a HIFU facial has few side effects, although some people may experience pain and discomfort right after the procedure.

The South Korean study concluded that there were no serious side effects of the treatment, although some participants reported:

In another study, researchers found that while some people who had HIFU treatment on their face or body reported pain right after the treatment, after 4 weeks, they reported no pain.

A different study found that 25.3% of participants had pain following the procedure but that it improved without any intervention.

The American Society for Aesthetic Plastic Surgery state that the average cost of a nonsurgical skin-tightening procedure, such as HIFU, was $1,707 in 2017.

However, the cost of HIFU treatments will vary depending on the location and the number of sessions.

A high intensity focused ultrasound facial, or HIFU facial, can be an effective way to minimize the signs of aging.

As a nonsurgical technique, HIFU calls for less recovery time than a surgical facelift, but the results will not be as pronounced. Still, researchers have found that the procedure can firm sagging skin, smooth wrinkles, and improve skin texture.

With good aftercare, the benefits of a HIFU facial can last for about 1 year.