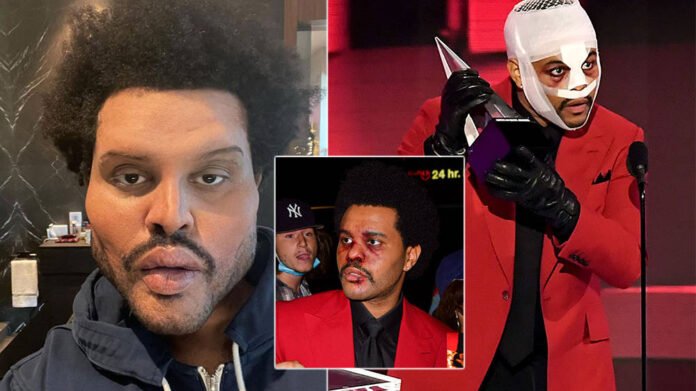 Ahead of The Weeknd’s Super Bowl 2021 halftime performance, the ‘Blinding Lights’ star has explained why he’s been wearing those bandages on his face and if he’s really had plastic surgery.

Leading up to The Weeknd’s Super Bowl 2021 halftime show, many fans have been talking about the star’s face bandages and prosthetics, shown in music videos and recent performances.

As we gear up for his highly-anticipated halftime performance, people have been wondering what really happened to the star’s face.

Who Is The Weeknd’s Girlfriend? His Dating History Revealed, From Bella Hadid To Selena Gomez

So, what happened to The Weeknd’s face? Has he had plastic surgery and why does he wear face bandages? Here’s what you need to know.

What happened to The Weeknd’s face and why does he wear bandages?

In November 2019, The Weeknd, real name Abel Makkonen Tesfaye, kicked off his new ‘After Hours’ era, which began a new phase for the star’s music, as he incorporated a red jacket and face full of bandages.

As new tracks and music videos starting releasing, it seemed the narrative only got more intense, leading to his iconic American Music Awards performance, where his entire face was bandaged up with a bloody nose and swollen features.

Explaining the reason behind doing this, Abel revealed in an interview with Variety that his post-plastic surgery look had a meaning behind it.

He said: “The significance of the entire head bandages is reflecting on the absurd culture of Hollywood celebrity and people manipulating themselves for superficial reasons to please and be validated.”

Has The Weeknd had plastic surgery or botox?

In short, no – the star hasn’t altered his face whatsoever.

He used prosthetics as part of a storyline for his album, ‘After Hours’.

When asked why he made an extreme change to his face, describing it as ‘increasingly unattractive’, whilst promoting his new project, he said: “I suppose you could take that being attractive isn’t important to me but a compelling narrative is.”

His new look definitely confused fans, but it’s safe to say his alarming look was just his dedication to his new music.

> Here Are All The Ways You Can Listen To Capital