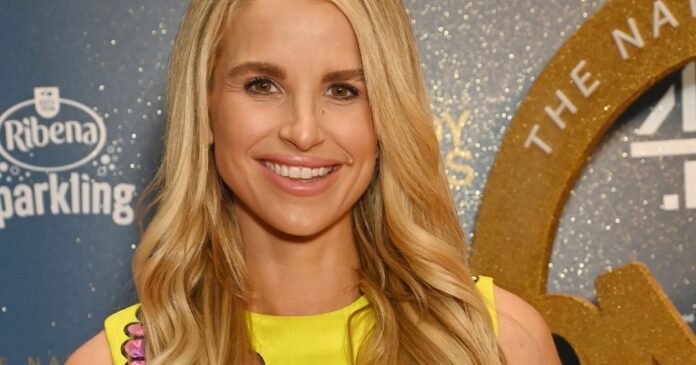 Vogue Williams said she feels no pressure to ‘snap back’ after giving birth to her third baby – but revealed she is using a special chair to make sure her pelvic floor recovers.

The Irish model and presenter, 36, welcomed her third child with husband Spencer Matthews last week, a brother to their two toddlers, Theodore, three, and Gigi, one.

And after working right up until her due date modelling, podcasting and running her tanning brand business, she said she is putting no pressure on herself to get back to her pre-pregnancy body.

“Definitely not now. Maybe with Theodore I felt the pressure that I put on myself, but not now. You just need to look after yourself.

“Getting your pelvic floor back is more important, I think. I go on this special buzzing chair called the PelviPower, and it’s amazing.”

Meanwhile, the popular podcast host said she’ll be keeping up her work from home as long as she feels fit.

“I’ll definitely take a break, but a lot of my jobs are done from home, so I’m happy to continue with those. I’ll just see how I feel,” she said.

“After I had Gigi, I felt amazing and sprung back to life quickly, but you just don’t know.”

Discussing how pregnancy has changed her body, she went on: “I think your body will always be slightly different because you’re stretched to within an inch of your life.

“But I’m quite lucky being so tall; I hold [a pregnancy] differently. There’s more space for the baby,” she added, in an interview with OK! Magazine.

The glamorous TV personality credits tan and concealer for giving her a boost on days she is feeling ‘cr*p’ to help her look and feel alive.

And she says she would consider trying botox and fillers in the future, but would be weary telling people when and if she ever does as people online already accuse her of having some.

“I definitely would, but I don’t know if I’d talk about it too much because then it’s the only thing that people ever talk about,” she explained.

“People actually say it now, I see the comments on the podcast video, like “oh your face doesn’t move” and I’m like, jeez, that’s a great compliment because I definitely do not have Botox.”

READ MORE: Aged in your 20s? Here’s how much of a pension you could have if you start saving €100 a month now