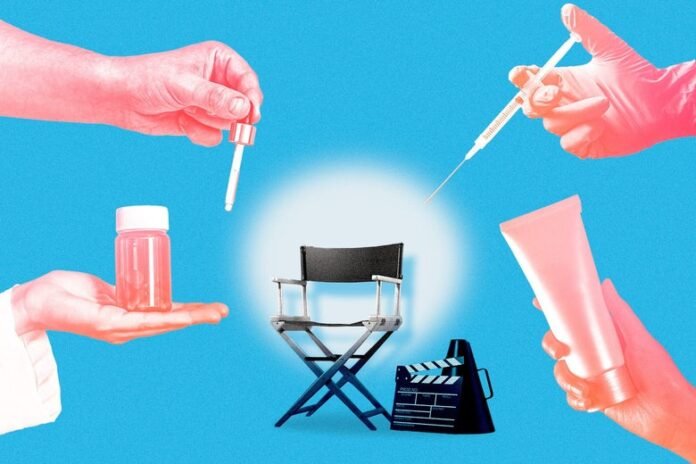 Last spring, inspired by (what else?) a TikTok, I started looking into CoolSculpting, a nonsurgical procedure that freezes away fat cells. While cryolipolysis can be applied just about anywhere on the body, including your upper arms, bra area, stomach, and thighs, I was interested in turning its icy grip on my jawline. In the micro-video, I watched as a girl like me went from lugging around an average mandible to proudly sporting the diamond-cut chin of an anime character—all for $750.

A quick Google search turned up a “medspa” two subway stops away that offered the 35-minute treatment. I booked a consultation. But in obsessively trying to understand how, exactly, this procedure worked, one reportedly rare side effect caught my eye: paradoxical adipose hyperplasia. In less than 0.5 percent of cases, researchers report, the body rebels and ends up producing more fat in the area targeted by cryolipolysis. Such a small incidence rate might have been reassuring for a lifesaving medical procedure, but given CoolSculpting is the definition of “optional,” I was sufficiently spooked. I canceled my consultation and, in the months since, felt only occasionally wistful about the chin that could have been.

So when ’90s runway icon Linda Evangelista recently came forward with her “fat-freezing trauma” in a People magazine exclusive, I was startled but vindicated. Evangelista said her own CoolSculpting treatments have left her with hard, painful protrusions on her jaw, thighs, and bra line, which two rounds of corrective liposuction have so far failed to fix. In addition to announcing a $50 million lawsuit against Zeltiq Aesthetics Inc., the parent company of CoolSculpting, Evangelista said she was going public to “help other people who are in the same situation as me.” But how, I wondered, did so many other ordinary people (potentially including me!) find themselves in the same absurd situation as a world-famous supermodel?

The answer lies in “VIP syndrome,” a term coined in 1964 by the psychiatrist Walter Weintraub to describe an intriguing paradox: Throughout history, the rich and famous, with all their resources and fancy doctors, have often received worse medical treatment, and suffered from worse health outcomes, than the average person. When physicians afford “special privileges” to their powerful patients, from “Mad King” George III to Michael Jackson, they seem to get sicker and even die. While Weintraub, a psychoanalyst, attributed the problem in part to doctors unconsciously resenting their influential patients, it seems doctors simply get starstruck around famous people and high-ranking figures. Despite their medical expertise, these physicians find themselves opting out of basic tests for “privacy” or prescribing dangerous medications for “comfort.”

VIP syndrome was once a problem limited to British royals and internationally renowned pop stars, but it has recently been democratized. Thanks to an endless parade of health care startups that have turned medical treatments into direct-to-consumer goods, more people than ever before have access to nurses, doctors, and more, available to act on their medical whims. Unfortunately, we are often worse off for it.

CoolSculpting is just the tip of the iceberg. The U.S. today has roughly 4,200 medspas that offer the veneer of the clinic with few of the regulations. In these strip malls and street corner stores, anyone can pay out of pocket for Botox, laser vein removal, dermal fillers, and other procedures meant to imbue us with superficial markers of health: taut foreheads, smooth legs, plump cheeks. Online, the options for prescription drugs designed to optimize both work and life are seemingly limitless: Stimulants, beta blockers, hair loss drugs, and erectile dysfunction medication can all be delivered right to your door, often with minimal human interaction required. Add in a frenzy for over-the-counter skin care products with harsh active ingredients and dietary supplements available in bulk at drugstores and you’ve got millions of people with individualized, unsupervised routines built on the idea that there’s an intervention for everything.

Traditionally, health care has been delivered by a primary care doctor who knows your history. When you arrive for your annual exam, medical professionals take your vital signs, ask you a few questions about your health behaviors, and send you on for bloodwork. If you need specialists, they can refer you to someone in-network and, in theory, keep a watchful eye over the totality of your treatments. Or at least that’s how it’s supposed to go. But health care in the U.S. has become increasingly fragmented—if you can access it at all. As the COVID-19 pandemic has revealed, there is no health care “system” and few people have a doctor they can consistently turn to. Direct-to-consumer startups have taken advantage of this landscape—and begun to exacerbate it. They can provide accessible ad hoc services for people who otherwise feel like they’re falling through the cracks, which lends the startups a sheen of social good. At the same time, they make the notion that everyone is a VIP an implicit part of their self-promotion: Hers is “tailored to you.” Roman does all the work “without the waiting rooms.” Nurx is “on your terms.”

Of course, cosmetic procedures have been popular for decades and overprescribing has been a concern for just as long. But recent developments have changed the way these services are delivered and to whom. Invasive plastic surgery, which requires a medical doctor with years of specialized training, has in the last decade been partially replaced by no- or low-recovery interventions like injectables. While they can still dramatically alter a person’s appearance, treatments like dermal fillers typically last just a few months, lowering the barrier to entry for people who might hesitate to make a permanent physical change.

Meanwhile, online shops like Hims, Roman, and Cerebral have essentially hybridized telemedicine (connecting patients and doctors) and pharma companies (selling prescription drugs)—two entities that have a hard time mixing responsibly. In the case of Hims, for example, if a patient decides they want a drug for erectile dysfunction, they can visit the site, fill out a questionnaire, and then chat with a clinician employed by the company to get a prescription for Cialis, Viagra, Tadalafil, or Stendra. Yes, a doctor can still deny a patient a drug, but in 2020 those employed by Hims reported feeling pressured by the company to keep their numbers up. It appears to be a pattern throughout the industry: Employees at Cerebral, a fast-growing mental health care startup, recently told Bloomberg that upper management wanted 95 percent of all customers seeking a prescription to get one (100 percent, they were warned, might look like a “pill mill”).

The result is that the entire circle of treatment is guided by a consumer’s wishes, not a patient’s needs—contrary to the reigning principle of shared decision-making in which doctors and patients are supposed to work together to decide a course of treatment. “We shouldn’t be thinking about medical care as being on par with a good mattress,” says Henry Curtis, a Ph.D. candidate in philosophy at SUNY Albany and the author of a paper on the ethics of Roman and Hims. That’s exactly what DTC health care companies seem to want. Yet the fact remains: People might not always know what kind of health care they actually need. Erectile dysfunction, for example, can be caused by cardiovascular issues, depression, and even musculoskeletal problems like cauda equina syndrome—three things that can’t be treated with an ED drug. But that’s how the “Very Important Patient” industrial complex perpetuates itself, by pushing people away from meaningful solutions and toward new purchases focused on fixing the symptoms, which inevitably come with side effects of their own.

I get it: When it’s this hard to find a real-life doctor or a therapist, lasering and lathering your way to a healthier, happier life holds immense appeal. But democratizing VIP services (and their risks) is not the solution—especially in an era where self-diagnosis is rampant. In an ideal world, direct-to-consumer marketing of prescription drugs would be illegal in the United States, just as it is almost everywhere else on Earth. A patient’s autonomy would be respected, but a doctor’s due diligence would remain essential. And everyone really would have access to a primary care physician who could coordinate the totality of care. If the fragmentation of health care continues, “there’s a risk the left hand and the right hand aren’t talking to each other,” says Caleb Alexander, an epidemiologist at Johns Hopkins University who researches prescription medicines. That’s when things go wrong.

While CoolSculpting may seem unique in how spectacularly badly it can go, every “solution” has the potential to become a problem of its own. When done wrong, laser hair removal can lead to burning, blistering, and scarring. Stimulant abuse can lead to dependence and excruciating withdrawal. And new trends seem to erupt in the vast chasm between self-care and health care every few months. But no matter what appears on my TikTok “For You” page, I don’t think I’ll be setting up any more medspa consultations or filling out any other online prescription questionnaires. Because I’m not a VIP, I’m just a regular person. And regular, dependable, health care is what we all deserve.