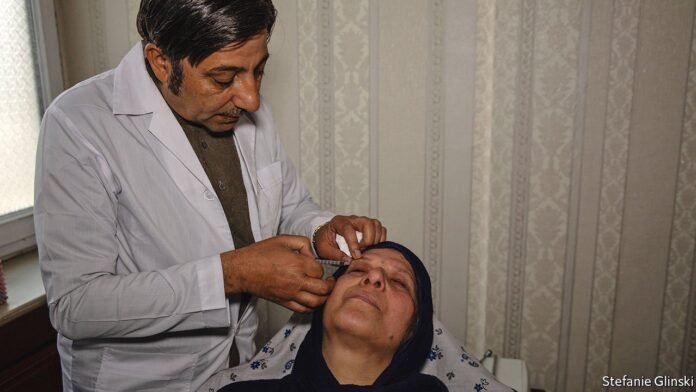 FROM THE outside the Arvin Hospital in Kabul is unassuming. Tucked away in a residential neighbourhood, it looks like a pharmacy. Yet enter the warren of treatment rooms and offices concealed behind the façade and you discover a quiet revolution. For prices that range from a few hundred to a few thousand dollars, Afghans can get a rhinoplasty (a nose job), a blepharoplasty (tautening the skin around the eyes), hair implants or liposuction.

Afghanistan is tormented by a brutal war between the government and the insurgents of the Taliban, which has intensified over the past year despite the initiation of peace talks between the two sides. At the edges of Kabul, the Taliban launch attacks nightly on army and police outposts. But for many Kabulis, the war on their doorstep is no reason to neglect their appearance. Some are turning to gyms, of which dozens dot the city, promising superheroic bodies. Shops stock huge bottles of imported protein powder. Cosmetic dentistry is also thriving; many clinics offer a “Hollywood smile”, with veneers made in the United Arab Emirates.

But it is plastic surgery that is perhaps the most surprising success. The city now has perhaps ten clinics that provide cosmetic procedures. Business is “growing day by day”, says Mohammed Arif Abdi, the lead surgeon at the Arvin hospital. “Middle-class people like to do surgeries,” he says with a shrug.

The demand often comes from Afghans who have spent time abroad, says Mr Abdi. People with family in neighbouring Iran are particularly keen on nose jobs, he says, which are extremely popular there. But thanks to social media, the use of which is soaring in Kabul, interest in “getting work done” is spreading. “Most of the people in Afghanistan want to do some cosmetic surgery,” he says, though the vast majority cannot afford it. If the economy improves, demand will soar, he predicts. Even now, the main shortage is not of demand but of expertise. Mr Abdi trained in Thailand and practised in India before coming back to Afghanistan to open his clinic. Relatively few Afghan doctors have such experience.

Sadly, there are risks to doctors joining the profession that do not exist elsewhere. “Security is our main concern,” says Mr Abdi. “Even in our hospital, we do not feel safe.” Doctors are thought to be rich, and so are often targeted for kidnapping. But religious extremists are a problem too. Doctors at Mr Abdi’s clinic have had threatening comments left on their Facebook pages, accusing them of disobeying the laws of Islam by meddling with God’s creation. Mr Abdi himself was once shot in what he suspects was a failed kidnapping attempt, but may have been an attempt to stop him working. He pulls up his trouser leg to show a scar from the attack which, even with access to the country’s best surgeons, will never be fully concealed.

Such incidents are another reason for the boom in plastic surgery. Thousands of soldiers and civilians suffer disfiguring injuries every year. Although the clinicians at the Arvin hospital make their money from nose jobs, they also patch up bullet wounds and treat burns, often charging far less than for procedures motivated by vanity. Even the most puritanical zealot should find it hard to quibble with that. ■