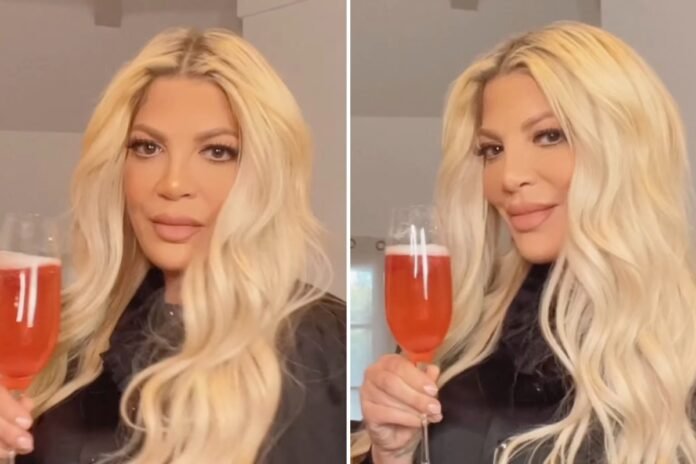 TORI Spelling has fans pleading with her to “stop with the plastic surgery” after sharing a glammed up video showing her altered appearance.

The former Beverly Hills, 90210 star is currently preparing to launch a new show amid rumors of a split from husband Dean McDermott.

Tori, 48, posted a video of herself getting glammed up set to the Billie Eilish’s hit single, Bad Guy.

The video kicked off with the actress wearing no makeup while her hair was piled high atop her head.

She shook her head from side to side, touching her hair before nodding forward and undergoing a seriously glam transformation.

Tori reappeared in front of the camera in full makeup, hair done with a drink in her hand.

Fans flooded the comments, pleading with her to tone down the procedures and go easy on the filters.

“Take the filters off though. You would still look amazing. Please for the sake of young girls,” one commenter wrote.

Another chimed in: “To each their own but I don’t get the endless amounts of plastic surgery.”

“What happened to your natural beauty?” a third fan questioned.

Another follower replied to the post: “Damn. Filler life.”

It wasn’t all negative, however.

A supporter commented: “I actually like her new look. I think she looks good. Just sayin.'”

Tori recently revealed that she often gets comments on her looks, nothing that she’s flattered by one specific comparison she gets a lot.

The star has been said to be “identical” to Khloe Kardashian in the past and she doesn’t mind at all.

In an exclusive interview with The Sun, Tori said that she is “flattered” to be compared to the Good American founder.

“I’m flattered, it’s a huge compliment, she’s gorgeous. I have not spoken to her, I do know her, I haven’t spoken to her since they started doing that.

“I don’t know how she feels about it but she’s awesome,” she gushed while promoting Hydroxycut.

Late last year fans went wild over the similarities between Tori and Khloe, 37, as the reality star has transformed her appearance around her split with Tristan Thompson.

The California natives have been spotted wearing similar hair, makeup, and even clothing styles.

In November, the pair even promoted the same migraine medicine brand as fans were convinced the two looked like “twins.”

Meanwhile, rumors have been swirling about the status of her marriage to Dean McDermott.

A source previously told Us Weekly that there has been tension and threats between Tori and Dean, which may be the reason why the two have yet to officially split.

The insider alleged that the Scary Movie 2 star “wants a divorce, but she feels trapped right now.”

The source added that Dean recently “went missing” for a few days after he got into an argument with his wife.

This led to the two having an even bigger “fight” upon his return.

The couple has started arguing about a divorce, the outlet reported.

Dean allegedly threatened to sue Tori, who has reportedly been open up about her many money troubles with child support and alimony.

Though her husband has signed a prenup, the insider claimed Tori “went ballistic” when she learned Dean could still sue for her money and got “pissed” at her attorneys.

The TV star has reportedly only stayed in the marriage “for the kids,” despite being “miserable.”

Meanwhile, Tori dealt with an ambush of questions about Dean during her appearance on The Wendy Willaims Show.

Guest Host Whitney Cummings asked: “What is going on with that guy- Dean? Nothing? Nothing?”

Tori shrugged off the question and replied: “What? You know I’m not going to answer that.”

Whitney accepted her response and moved on to another subject during the interview.