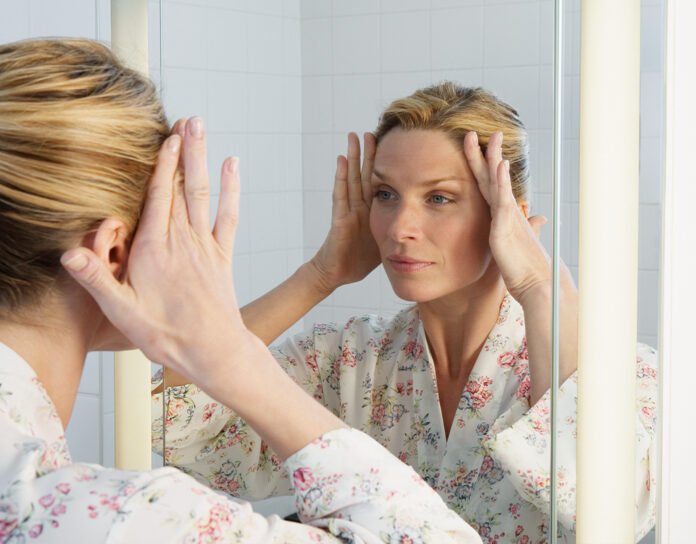 Wouldn’t it be amazing if plastic surgery could be done completely incision- and scar-free? Top surgeons would have waitlists 10 miles long! However, until that day comes—if ever—we’ll need to rely on the skills of well-trained doctors who are constantly searching for ways to reduce scarring in order to better satisfy their patients. In the right hands, scars can be minimal wherever possible, and with the right wound-care products, their appearance can also be lessened. If you’re planning for an upcoming procedure, these are the types of scars that can result from some of the most popular surgeries—and the best products to treat them afterward—so you can be best prepared.

New York plastic surgeon William Lao, MD, says the scar from an abdominoplasty is usually a horizontal scar that can be as long as from hip to hip, but should be as low as possible to be well-hidden by a bikini or underwear. “Whether a scar appears pretty or not usually depends on three factors: 1) the surgeon’s suture skill; 2) post-surgical care with scar gel or patches; 3) genetics,” he explains. “Only the first two factors are controllable.”

“The scar of upper blepharoplasty is in the natural skin crease of your eyes and virtually unnoticeable, except when you close your eyes,” explains Baton Rouge, LA plastic surgeon John V. Williams, MD. “The lower blepharoplasty has an incision just below the lower lid eyelashes. Both of these scars usually heal excellently and are barely noticeable. Finally, there is the transconjunctival blepharoplasty that removes the bulging fat bags underneath the eyes. This is done within the inside of the lower lid and hence no visible scars!”

Campbell, CA plastic surgeon R. Laurence Berkowitz, MD says the scarring from this procedure will depend greatly upon the anatomy of the individual and how he or she has aged. “While the vast majority of browlifts are done endoscopically, there are still the five ports of entry, each with an attendant scar,” he explains. “Generally the three frontal ports are perpendicular to the hairline and do not cross hair follicles. They are behind the hairline and generally imperceptible. The two temporal ports to lift the lateral brow are generally made behind, but parallel, to the hairline, so caution must be used to protect the hair follicles within the dermis and beneath the dermis or some linear hair loss can be expected and the scar visible when the hair is wet. In patients with a high hairline who wish for a lower hairline as part of the process, an incision hugging the hair follicles along the frontal hairline is generally employed, and when closed meticulously, it can result in an acceptable trade-off for a better ratio of exposed forehead. Lastly, there are some surgeons who will still employ a transcoronal approach, which has few advantages in my opinion compared to endoscopic lifts, and will unfortunately result in a more visible scar when the hair is wet or not styled to cover (among other disadvantages).”

“When a chin implant is placed, we are asking the body to incorporate a foreign body into the hardscape of the mandible, or jawbone,” says Dr. Berkowitz. “This seems simple, but must be done in a meticulous manner, and an external approach under the chin provides safer access to prevent infection and better stability to avoid misplacement than an intra-oral approach. That scar can be imperceptible when placed properly, but at times, it can appear indented and may require further scar management. My preference to chin augmentation is advancement of the chin done intraorally. That scar is not visible, but again, it must be placed properly to avoid a shortening of the sulcus [groove] between the lip and the gums.”

There are several types of facelifts, all with different incisions/scars.

“For people in their 30s to 40s, if their jowling is minimal, a mini-facelift, or a ‘Z lift’, designed by myself, is used to run 1.5 inches behind the hairline above the ear, extending a little in front of the the ear,” says Arcadia, CA Arthur Y. Yu, MD. “Using endoscopic means, we can lift the face up nicely, with SMAS tightening done through the tiny opening—because the incision is mighty small and done 45 degrees to the hair roots. After six months, hairs will grow from the scar tissue, and in most cases, the hair masks the scar very nicely.”

This is often used for people in their 40s to 50s, with modest jowling and minimal neck laxity. “For mid-facelifts, or ‘short scar’ facelifts, the incision runs in front of the ears,” says Dr. Yu. “Some surgeons prefer to bury the scar behind the tragus [the small piece of thick cartilage on the inner side of the external ear], and some choose to place it right on the edge. I, most of the time, place the incision right in front of the tragus, at a skin crease there. This way, I could make sure that the tragus, which is a very important aesthetic feature, is being preserved. For Caucasian people, this scar is hard to find. Of course, the surgeon needs to design the incision in such a way that it does not run in a straight line. It needs to curve around the ear and in the spot just below the tragus, tracking into the ear meatus slightly, so as to break the scar continuity. This maneuver serves two purposes: 1) The human eyes are very sensitive to long running scars, and if possible, it’s always nice to break it up. 2) An interrupted scar does not contract linearly, and therefore, minimizes the chance of skin distortion from scar contracture, which happens to almost everyone.”

According to Dr. Robbins, this facelift addresses the upper, middle and lower face, as well as the neck and is commonly used for patients in their 50s and 60s. “The classic full facelift involves an incision/scar in the temple, either in or in front of the hairline, extending down in the creases in front of the ear and then around the earlobe, behind the ear and then in the hairline behind the ear,” he says.

Dr. Yu adds that it’s essential for the surgeon to design the procedure in such a way that the tension of the facelift is placed on the SMAS layer, rather than the skin, in order to avoid a “pixie ear” effect. “Also, if the tension burden is not on the skin, the wounds are going to heal well, hence, scar formation is minimal,” he says.

Dr. Yu calls this “the ultimate facelift,” and says he uses it for ultra-heavy faces in any age group. “After liposuction for the removal of excess fat in the jowl and under-chin areas, the deep plane facelift is done by accessing the SMAS layer more medially to make the SMAS tightening a few folds more efficient because it is the more medial portion of the SMAS that is mobile and directly connects with the nasolabial folds and the marionette lines. The rationale is very simple: it’s all about efficient mechanics.”

With deep plane facelifts, Dr. Yu says the surgeon should be able to better minimize the skin tension, and therefore, the scars are usually better. “This is a far superior technique with much better lift, and the jowls are much improved, the jawline is restored and even the midface ‘apple cheek’ could reappear.,” he explains. “Additionally, the neck most likely will improve tremendously, without a formal necklift! However, not too many surgeons know how to do it, so make sure to do your research before choosing a doctor.”

“The lip lift has recently gained popularity, and from what I gather at meetings, is still done most frequently with a bullhorn shape that leaves a scar under the nostrils and across the base of the columella,” says Dr. Berkowitz. “This scar may fade, but can give the appearance of a separation between the lip and the nose, which is not natural. I prefer a coronet-shaped incision that places peaks inside the nostril floor and into the columella to blend the nose/lip interface. When this scar fades, it is imperceptible from all angles.”

“A necklift involves an incision only behind the ear and treats only the neck,” says Dr. Robbins.

There are types of rhinoplasty: open and closed. “A closed rhinoplasty is all done from inside the nose, and because of that, no skin scars result,” says Dr. Williams. “An open rhinoplasty has a scar at the base of the center of the nose called the columella. This scar is visible, but usually heals. There are certain indications for each, but I prefer to do a closed rhinoplasty whenever possible because the healing time is faster and without noticeable scars.”

Dr. Yu also prefers closed rhinoplasty, or an intra-oral approach. “Of course, there are still many cases where you would have to have an open rhinoplasty. Most of the time, it’s done through a transverse incision at the columella. If the surgeon is careful with regard to the skin tension, the scar usually is not bad. Although it could become unpredictable among the Asian or the African-American patients, due to their tendency to form bad scars. But then again, these two populations are exactly the groups of people who would benefit more from the intra-nasal or the intra-oral approaches for rhinoplasty.”

“Before suture removal, usually no care is needed, just daily cleansing and occasional ointment or lubricant is enough,” says Dr. Lao. Dr. Robbins adds that you can gently clean your sutures with soap and water in the shower. “Try not to use too many wound-care products in the first week,” Dr. Yu advises. “Ointment would be the only thing to use locally. No need to worry about scabs. If you peel that off, you could lose that protective natural biological cover. Let your doctor do the worries. After all, our tissue is designed for great self-healing powers.”

After the sutures are removed, Dr. Robbins instructs patients to use topical scar creams, as well as cocoa butter and vitamin E oil twice a day, and of course sunscreen when outdoors. Dr. Lao adds, “Scar treatment with silicone gel or silicone sheet products for three to six months is recommended to minimize scarring. The most common products that are scientifically proven to be helpful is silicone-related products, and can be in gel or patch form.” Our new favorite: SkinCeuticals Advanced Scar Control, which features a combination of 95-percent silicones, 0.5-percent allantoin, 2-percent fatty acids, and 1-percent ultralight silica to protect and soothe post-procedure skin.

After having treated burns for 20-plus years, Dr. Williams says he quickly learned that the most important treatment to improve and reduce scarring is to apply pressure to the scar until the scar turns from red-pink to pale-white. “This can be done with finger pressure using Bio-Oil, an excellent product I like,” he says. “This allows an even, firm distribution of pressure to the healing scar. This needs to be done four to five times a day or more if possible.”

Dr. Berkowitz also credits Vbeam laser treatments with helping to reduce the appearance of scars—one treatment per week for six weeks helps reduce erythema. “I also recommend the application of silicone-based gel that incorporates a sunblock, like Sientra Biocorneum, though we don’t recommend it for incisions around the eyes. Silicone gel application is simpler and better-tolerated on the face than silicone sheets, and allows for the application of concealer after it dries.”