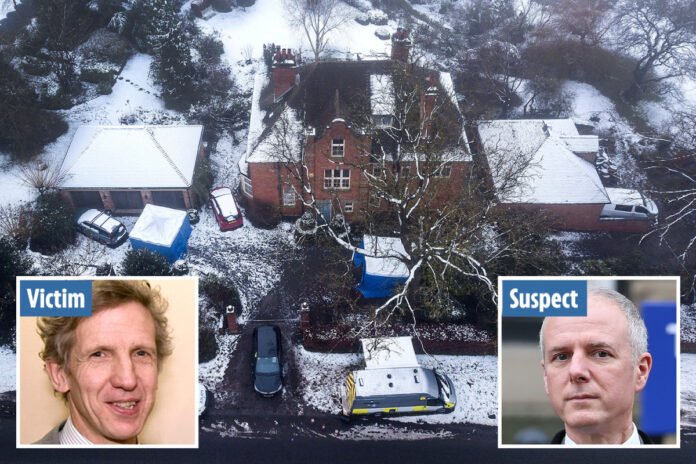 A TOP plastic surgeon was still “too ill” to talk to cops as a fellow doctor appeared in court today for his attempted murder.

Graeme Perks, 65, suffered puncture wounds to his stomach and chest in what detectives described a “horrific ordeal” at around 4.15am on January 14.

The 56-year-old made a brief appearance at Nottingham Crown Court this morning, where he spoke only to confirm his name.

No pleas were entered and Brooks, of Southwell, Notts, was told to appear again on May 28.

A trial date was set for September 27.

Mr Perks, who lives in the village of Halam, Notts, with wife Beverley, 68, and one of his four kids, was “not yet in a condition to provide a formal account”.

The surgeon is said to have been alerted by breaking glass at his £800,000 former vicarage home in Halam, Notts, more than a month ago.

He suffered wounds to his abdomen and chest and was rushed to hospital where he was put in intensive care and later remained in a “serious but stable” condition.

As well as attempted murder and possession of a kitchen knife in a public place, Brooks is accused of three counts of attempted arson with intent to endanger the lives of Mr and Mrs Perks, and their son Henry.

Discussing the case, Judge Gregory Dickinson QC said: “Mr Perks is not yet in a condition to provide a formal account, as I understand it.”

There was no application for bail and Brooks, of Southwell, Notts, was remanded back into custody.

The court was told members of his family were watching the case online.

Mr Perks remains listed as chairman of the British Association of Plastic, Reconstructive and Aesthetic Surgeons’ professional standards committee (BAPRAS) and is a past president of the organisation. He qualified as a surgeon in 1979.

Current BAPRAS president Ruth Waters said the body had been contacted by colleagues all around the world as news of the attack spread.

She said: “All have expressed their shock at what has happened and also their deep concern for his wellbeing and their hope for his speedy recovery.

“It has been my good fortune and honour to know Graeme for many years. I have benefited from his kindness, generosity and extensive knowledge throughout my career in plastic surgery.”

‘TOO TIRED TO FIGHT’

Outgoing BAPRAS president Mark Henley said: “Graeme is an amazing colleague who it has been my pleasure and privilege to work with over the last 26 years.

“His dedication to patients, family and friends is an inspiration to us all and with his wisdom, kindness and humanity he has enabled us to achieve many things that I would never have thought possible. We are all willing him on.”

In a statement, BAPRAS said: “Graeme Perks is one of the most highly regarded and respected surgeons in the profession.”