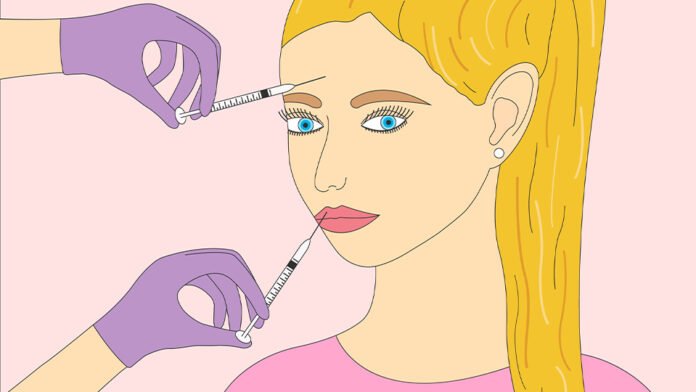 I grew up in Beverly Hills, where everyone looks one of two ages: Kylie Jenner’s or my grandma’s. Grandma took me for a plastic surgery consultation at 16 (in her defense, I’d begged her to), where the surgeon said I needed rhinoplasty, as well as cheek and chin implants. I didn’t get them. And this was way before the Zoom Doom boom of Botox and fillers.

Today, I’m 29, and even with the email “[email protected],” I’ve completely given into patriarchal beauty norms for women. Despite “knowing better,” I’m preoccupied with aesthetic (and unattainable) perfection: A Mexican Jew, I’m so Western-beauty-and-peroxide-processed I look like I hail from Sweden. At 28, seven months into the pandemic, I was hit by “Zoom Doom,” and got Botox. Then, the Cali Glam Instagram filter brainwashed me into pursuing under-eye filler—an impressive feat considering my severe fear of needles. I fainted during the procedure, but love(d) my results. Prior to my loss of consciousness, the surgeon said the same as the one from my teens: My nose, cheek, and chin needed volume.

If my flaws are anything, they’re consistent!

Unfortunately, today no matter the hometown, everyone is equally subjected to arbitrary aesthetic comparisons. FaceTune allows you to trim your waist, clear blemishes, change your eye color and more— and that’s to say nothing of what filters can do in the first place, essentially displaying your “after” photo in your very own front camera. The pandemic only exacerbated an already prevalent issue, and today unparalleled numbers of patients are pursuing plastic and cosmetic surgery and injectables, provoked by the phenomenon surgeons have coined “Zoom Doom” or the “Zoom effect:” The process of noticing every little flaw in your face while staring at yourself on Zoom, which according to Stanford research, primarily affects, and is much worse for, women.

Meanwhile, on TikTok, women as young as 18 are being inspired by “filler TikTok,” going on to chronicle their own filler procedures on the app and ultimately going viral. They then influence someone else their age. And so it goes: Cosmetic patients are trending younger by the minute.

“It’s because of social media and reality TV,” says Renee Moran, D.O., injector and owner of Moran Medical Aesthetics in Newton, MA. “We see a lot more popularity [in procedures] among millennials.” Craig Forleiter, M.D., a plastic surgeon in Palm Beach, FL, has observed the same, of “the selfie generation.”

Injectables refer to either neuromodulators or synthetic fillers. Neuromodulators, also called neurotoxins, are most commonly known by their brand names Dysport, Jeuveau, Xeomin and Botox, and temporarily paralyze the muscles into which they’re injected—like a sports bra for your face.

Filler, on the other hand, inflates the area into which it’s injected, like a padded bra. They’re customarily made of hyaluronic acid, a naturally occurring sugar in your body, although other types of filler include Calcium hydroxylapatite (brand-named Radiesse) and Polylactic acid (brand-named Sculptra). Hyaluronic acid is the most popular, accounting for brand names Juvederm, Restylane and Bolotero, and is responsible for many pouts with which I’m familiar.

The major uptick in teens and twenty-somethings pursuing filler has steadily increased over the past few years, but skyrocketed amid the pandemic alongside the pandemic plastic surgery boom prompted by Zoom doom—and likely spending so much more time on social media while stuck at home. Research has found that one of the most prevalent factors in young women pursuing injectables and/or facial surgery is to look better in selfies, and these decisions are often influenced by photos they see on social media. And now that cities are opening back up, more women are pursuing injectables than ever.

“People are trying to look like a filter,” Marc Mena, a celebrity hairstylist and beauty expert, says of the trend. “We have face dysmorphia.” How could we not? Social media is continually feeding its impressionable audience with Photoshopped footage of “perfect” people, with no way to differentiate between original and edited images. We’re comparing our actual selves to fabrications.

Actual apps alter our appearances, too. Filters refine features and conceal imperfections when you take your picture, often emulating the after-effects of aesthetic surgery. Smooth skin, larger lips and higher cheekbones are all possible via filters—even Zoom has a “touch up my appearance” blurring feature.

“The airbrushed effects of some apps immediately send the message, ‘You are not enough as you are,’” Kara Lissy, L.C.S.W, a New York therapist, says. “People quickly internalize thoughts like, ‘My cheekbones should be higher; my lips should be fuller.’ Teenagers and young adults are particularly vulnerable.”

Some Instagram users, concerned by this messaging, have actually created filters in response to the falsified phenomenon. Faye Dickinson, a 28-year-old content creator in London, launched a split-screen “Filter v. Reality” filter, in which one half of the selfie camera displays what an individual resembles with a beautifying filter and the second half shows what the user looks like naturally.

“The idea behind [the filter] was to create something to show people how these dramatic beauty filters rid selfies of skin textures, tones, scars, everything that makes you,” Dickinson explains over email. “It is easy to feel insecure, seeing how so much of the content we consume daily is filtered and photoshopped. Everyone looks picture-perfect; it’s hard not to point out your flaws, so I created both filters to show people don’t believe everything they see on social media. Online isn’t real.”

But of course, that’s easier to say than actively remember when scrolling through a sea of seemingly flawless influencers. Thus, it’s no surprise injectors have turned to social media to advertise their work, considering screens’ influence on consumers. Kristina Kitsos, a Beverly Hills aesthetic nurse who shares her procedures on TikTok, was initially reluctant to promote her practice via social media. Having been in the field for more than 17 years with a client base of more than 5,000—all through word-of-mouth and business cards—she felt she was doing just fine. Then her ‘aha moment’ came when she was invited to train doctors and nurses in aesthetic techniques.

“The [company] owner made an announcement and said that we had a ‘rock star’ here with us today. Since I was doing the training, I assumed he was talking about me.” she says. “He wasn’t. One of the trainees, who’d been practicing for three years, had 70,000 followers. He meant her.”

Kitsos was shocked. She couldn’t believe so many people assumed practitioners were better when they had more followers, regardless of their qualifications. She’s since dedicated her TikTok content to properly educating followers on best aesthetic practices.

Injectors aren’t the only people documenting procedures on TikTok: Patients are doing it, too. And it’s become so popular that there are accompanying “challenges” encouraging users to post before-and-afters of their aesthetic modifications. Nina Tylutki, an 18-year-old student in Ohio, posted one of these videos, chronicling the four days leading up to “having an upper lip” (her words), as in the day she received half a syringe of Restylane Kysse in her top lip.

Filmed and posted to TikTok on December 22, 2020, the video collected more than 8.5 million views in a month. “I want to make it known that it’s perfectly okay to get lip fillers,” she says. “You should have no shame getting anything done to please yourself.”

While I certainly agree, it would be remiss of me to overlook the very real risks of filler, and reiterate that any form of injections should not be taken lightly. Faulty filler injection can cause infections, blindness and necrosis, which is death of skin cells and tissue due to a lack of blood and oxygen, and if unnoticed and/or untreated, a necrotic wound can discolor and change the texture of the skin, turning dark brown or black, and “leathery.”

Injectables are a long-term financial investment, too. In order to maintain a desired aesthetic, filler must be touched up every three to four months, and Botox costs an average of several hundred dollars per individual treatment, while one filler treatment can range from $800 to $2,500—sometimes more.

Teenage boys, like Simon Petterson, a 19-year-old in Sweden, broadcast their cosmetic endeavors on TikTok, too. Petterson, inspired by influencers and celebrities online, has received filler in his lips, nose, jawline, chin and cheekbones, as well as a Polydioxanone (PDO) thread lift. He’s pleased with his results.

Georgiana Dusa, a 23-year-old student in Toronto, also got a thread lift—but her experience wasn’t as positive as Petterson’s. “I started swelling a lot and couldn’t find anything online,” she says. “I called my doctor: I had a very rare side effect. Usually, people do not get as swollen as I did.” Once she healed, she shared her experience as a warning.

Others are using TikTok to caution users of potential injectable risks as well. Desirae Bolich, a 21-year-old living in San Diego, CA, posted a video captioned “lip filler journey over the last four days,” sharing her less-than-ideal experience with the after-effects of lip filler, when her lips swelled to the point that she felt like “a duck that got punched in the face.”

“If you were thinking of getting filler, let this be your reason to not,” she says in the clip.

Gisele Ayora, a beauty influencer in New Jersey, also seeks to educate her followers. Her most popular video, “Five Things I Wish I Knew Before I Got Lip Filler,” reiterates the importance of researching injectors beforehand, inspired by her bad experience with filler, despite her experience having worked in a medical spa.

Her former place of employment provided injectables, and Ayora always assumed injectors had to undergo extensive training for certification. I, too, was under the impression that only doctors, or well-trained nurses, could inject filler—which is sort of true. You must be a registered nurse, physician’s assistant, nurse practitioner or medical doctor (M.D.) to administer injectables, though these rules vary state to state. Normally, non-M.D.s can only administer injections under the supervision of a physician, which sounds comforting. What isn’t is how many practices define being under a doctor’s supervision.

“The physician who’s supposedly ‘supervising’ is never even there,” Beverly Hills dermatologist Harold Lancer, M.D., says of some practices with which he’s familiar. “[The doctors] get a percentage of the profits, and hire staff to do injections, who are supervised, long-distance, by physicians, [who] could be unlicensed psychiatrists.”

It’s also important to note that titles like “doctor” or “M.D.” don’t necessarily mean someone is more qualified. My psychiatrist is an M.D. and I’d rather she didn’t inject my face, while I also don’t exactly want my dermatologist prescribing my anti-depressants.

So knowing all of this atop my severe phobia of needles, why do I keep getting injectables? “It’s an addiction,” Mena says. “The new drug dealers are the injectors.”

While “addiction” sounds like a strong word, it can indeed be the case. “Anything that gives us a dopamine hit has the potential to develop into an addiction,” Lissy explains. That said, it’s complicated, considering self-care, which is highly encouraged by most mental health practitioners, is almost synonymous with beauty regimens. So where do we draw the line? “When it starts interfering with your budget or your ability to see yourself as a worthy, beautiful person,” she says.

I pause on the word “validated,” and think of everyone pursuing injectables to improve selfies. What are photo-sharing apps if not validation bait—a constant competition for who gets the most likes?

A few hours after my filler-induced fainting spell, my sister, who is 22 and still lives in LA, yelled at me over FaceTime. “You’re going to look like everyone else!” The next day, my sister calls again. “Should I get under-eye filler?” I say no, she’s 22. “But now I’m scared I need it.”

And so it begins.