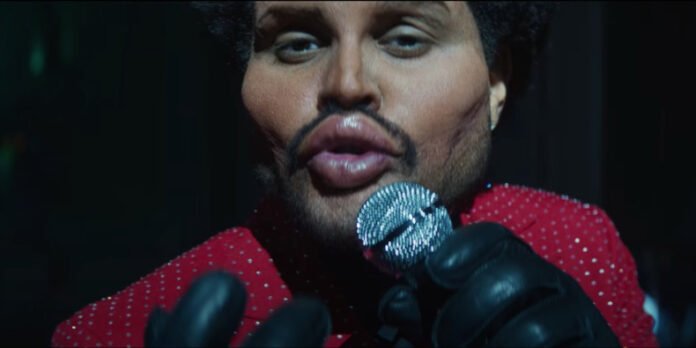 The Weeknd’s face spent much of 2020 on a very public journey: from first bruised and bloody to then heavily bandaged and finally, seemingly both chiseled by a surgeon’s scalpel and pumped full of every filler in a cosmetic dermatologist’s arsenal. The musician also known as Abel Tesfaye had been more “show” than “tell” about the situation, and most fans figured it was a deliberate performance art-type choice. Though, in the latest promo clip for his upcoming performance during the Super Bowl halftime show on Sunday his face is back to normal, signifying an end to the storyline. Tesfaye is also now ready to comment on it a bit.

“The significance of the entire head bandages is reflecting on the absurd culture of Hollywood celebrity and people manipulating themselves for superficial reasons to please and be validated,” the musician told Variety during a quick Q&A.

“It’s all a progression and we watch The Character’s storyline hit heightened levels of danger and absurdity as his tale goes on,” he elaborated. “I suppose you could take that as being attractive isn’t important to me but a compelling narrative is.”

The Weeknd also performed at the iHeartRadio Jingle Ball with his natural visage, and it would seem like his face will be intact for his performance at the big game (a smart choice considering the more casual fans tuning in might be perplexed otherwise).

The visuals and promotion for his latest album, After Hours, has been tightly controlled. Throughout all of his music videos and most of his television appearances, Tesfaye wore similar red and black suits and the same hairstyle, with only the contours of his face changing. The general idea: the album’s visuals were playing out over one very bad night in Las Vegas. It hit its apex with his video “Save Your Tears” in which he unveiled the disturbingly altered effects of apparent extreme plastic surgery.

The Weeknd appears in his “Save Your Tears” music video with disturbing plastic surgery.

The more intriguing implication, however, is that in leaving the entire changing face gimmick behind, it could mean Tesfaye has something new cooked up for his NFL performance.

Related: Halsey, Drake, and The Weeknd Are in Open Revolt Against the Grammys