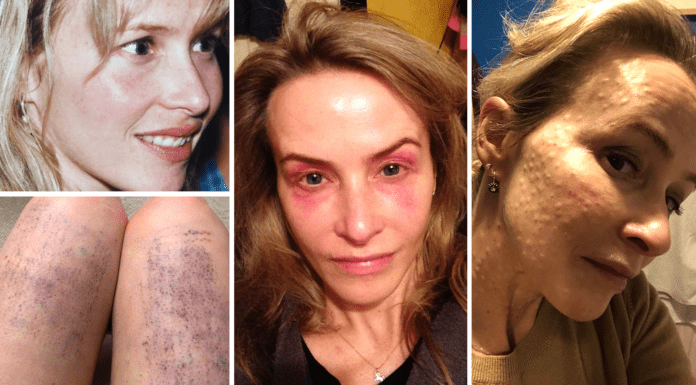 A drop of Botox here, a light dusting of radiofrequency there… non-surgical cosmetic procedures, or tweakments, are so popular and pervasive now, you’d assume they are no more invasive or risky than your average pedicure. And to be fair, with terms like ‘zero downtime’, ‘lunch hour procedure’ and ‘minimally invasive tweaks’ so rife in beauty journalism and on clinic websites, I can’t blame anyone for believing this.

But tweakments are not pampering facials. They are largely medical procedures that manipulate living flesh with syringes, toxins and extreme heat. Their aim, in the majority of cases, is to wound skin – in a ‘controlled manner’ and so as to elicit a healing response, but wound it nonetheless. Don’t get me wrong: in the hands of an experienced doctor, they are perfectly safe. But the road to the final result can be paved with bruises, welts and swollen bits, sometimes due to unexpected mishaps and sometimes because they are simply part of the process.

It’s these unglamorous downsides that you hardly ever hear about. That’s possibly because they wouldn’t look great on Instagram or TikTok and nobody wants to admit they didn’t emerge, swan-like, from the laser clinic, ready for their close-up.

Well, I can tell you that I mostly exit clinics looking like Quasimodo, lobster-red or covered in lumps. I resembled a car crash victim after under-eye mesotherapy (the whole area went blue for two weeks). And I walked around with a black bottom for a month, thanks to an early, ultrasound-based, ‘body contouring’ machine. A laser treatment on my face to zap a large dilated blood vessel bruised for a week (below centre). A chemical peel around my eyes made me look like I’d been inconsolably crying for days (below centre. All these issues were soon resolved and the outcome was usually positive but I feel it’s my duty, as a beauty director to be honest about this. I’m treated by the best cosmetic doctors the nation has to offer (yes – irritating, I am aware) yet can end up bruised and battered, so what does that say about everyone else’s chances of experiencing the same? Those chances are high – and that’s the truth.

Ask any beauty editor who has tried tweakments, they’ll have plenty of unsightly ‘immediately after’ photos. GTG Editorial Director Victoria has joined me in sharing some of hers here too. When she tried Tixel, to tighten the skin around her eyes (below right) it left her looking like she had a bad sunburn with scabbing for a good week. It was perhaps no surprise for a heat-based treatment that uses titanium rods heated to a searing 400C.

I’m not suggesting you should steer well clear of these procedures altogether. I would just like for people not to have unrealistic expectations or get a nasty shock in the treatment chair. So here are six things I’ve learned in the tweakment trenches that I think may be helpful to know.

Anti-wrinkle jabs such as Botox (there are other brands of this neurotoxin, such as Dysport, Bocouture and Xeomin), will temporarily paralyse certain muscles so that your face can’t make folds and create lines. But cancelling out one muscle will make another over-active, and this is how these jabs are often used to bring about a mini-brow lift: injecting toxins between the brows will make many a patient’s outer brow corners shoot up, even if they get their entire forehead injected.

It’s a neat trick, and a damn sight cheaper than a surgical brow lift or eyelid surgery. But the outcome is dependent on personal anatomy – as I learned from repeated Botox sessions that resulted in dropped brows and tiny piggy eyes (nobody except my husband, after I demonstrated how I had to push my eyebrows up with my fingers to reveal my eyelid, really noticed, but it made me feel extremely self-conscious). Some people’s ‘upward-pulling’ (this is not the technical term) forehead muscles are not that strong, resulting in no compensatory ‘lift’ and the entire brow lowering slightly.

A good practitioner can see this from how your face naturally moves, and will advise accordingly. So please listen to them, and don’t assume that because something worked so well on a friend, you’ll have the same outcome.

You should double the suggested downtime

The time it takes to look completely normal again after a tweakment, is routinely underplayed in clinics’ marketing materials and in the press. Something to bear in mind if you’re having a procedure ahead of an event. ‘A little redness’, for example after radiofrequency microneedling, translates for me as a tomato-red face for the rest of the day – one that will probably be pink with pinpoint blood splotches for a few further days. Victoria says the same – her picture below right was taken on the way home from a micro-needling (Derma Pen) treatment, after which you have to stay makeup-free for 24 hours.

Some small bumps that will disappear in few hours’ can mean Star Trek alien lumps for three days that will make people stare (Profhilo, in my case, below left) or skin akin to bubble wrap for a day or two (this happened when I tried Teosyal Redensity-1 skin booster, below right). Powerful energy-based treatments can cause deep bruising and anti-pigmentation lasers can make brown spots go three times as dark and prominent before they fade. Whatever downtime is quoted, multiply it by two or three to be safe.

Eye puff: a possible side effect of trough fillers

Puffy ‘cushions’ under the eyes can be caused by under-eye and tear-trough fillers, if they’re not chosen or placed carefully. Fillers are made from hyaluronic acid, which attracts water. If a filler is placed too close to the skin surface, it can absorb water from the atmosphere and puff up. Choice of filler is also a factor: some hold more water than others. And a sluggish lymph function is another: if moisture in the lymph ducts is not being drained away, the fillers might absorb it, resulting in these puffy pads that come and go. I’ve seen this happen as much as three years after having under-eye fillers myself, when remnants of it would continue to inflate to small, near-transparent under-eye pillows. This would happen especially in the morning when lymph activity is sluggish from lying down – and mine is rubbish at the best of times. Lymph function also slows down with age, so these are all things to consider and ask your doctor about.

Be wary of the word ‘discomfort’, of which, say most descriptions of most non-surgical cosmetic procedures, there ‘might be a little’. I’d say take that with a grain of salt and just call it ‘pain’. While it will be fleeting, I would venture there’s often quite a lot of it. Pain thresholds vary, of course. Mine is average and many of the tweakments I’ve had hurt like hell at one point or another, with ultrasound treatments , which I’ve had on my face and body, being among the most hardcore. Their energy comes in hot flashes of pain deep under the skin that have me digging my nails into the treatment bed so hard I’m surprised I haven’t torn one up yet.

Whether someone jabs your skin with dozens of micro-injections or pokes around under it with one massive needle, whether they shoot deep heat into its depths or zap its surface with searing lasers, this stuff stings, burns and aches, sometimes despite numbing cream being used, and it’s definitely never pleasant. So be prepared for the worst and take a painkiller in advance, if that’s allowed for your particular procedure (check with your doctor first) – only then you might find it’s not as bad as you expected.

(Below: Coolsculpting and radiofrequency microneedling)

Lip procedures aren’t for the faint-hearted

We’ve all heard of and seen plenty of lip filler botch jobs, but administered by a good doctor, they shouldn’t cause any trouble bar temporary initial swelling. It makes you look like your lips have been over-filled for perhaps a day or two. It’s nothing grotesque, but it had me slinking down the shady side of the street with sunglasses on for a few days.

A lip ‘flip’, however, where toxin (not filler) injections are used in the lip to stop it contracting, giving the illusion of slightly fuller lips, does cause an issue even if it’s expected and manageable. Because think of what you do when you whistle, kiss, drink from a straw or eat from a spoon: all that pursing and stretching is no longer possible if the muscle in your top lip won’t work. The effect can be minimised by a good doctor who knows exactly where to jab, but that knowledge wasn’t yet there when I had an avant la lettre lip flip many years ago, just before my wedding. Needless to say, kissing the groom and eating the cake became somewhat complicated, on that day of all days.

Having said all this, sometimes the horror stories aren’t the full narrative so do make sure you do your own thorough research. Coolsculpting, for example, is no more risky than other tweakments. Fat freezing or cryo-lipolysis – made popularised by the Coolsculpting brand until supermodel Linda Evangelista suffered a very public, but very rare, complication – has become a sort of ‘poster treatment’ for the risk that tweakments may pose. But the truth is, if you’re going to intentionally damage living skin, whether by burning, cutting, puncturing or freezing it, outcomes are never 100% guaranteed and you are always taking a hopefully well-calculated risk. (All possible side effects are listed in your disclaimer forms, if you care to read them through.)

Evangelista’s complication highlights these real risks and should have been avoided, but that doesn’t mean CoolSculpting (which is more effective at reducing localised fat pads than any other fat loss machine, all of which I’ve tried, see my picture ) is significantly more dangerous than other tweakments out there. As always, the patient’s individual circumstances and the doctor’s ability to tailor treatment around them influence the result. That’s why selecting the most qualified physician you can possibly find, disclosing anything that might be of slightest importance, and asking every question you can think of, is crucial. Full disclosure – whether it’s about expectations, risks, downtime or pain levels – is always the best starting point.