Emily Patrickson looks approvingly at her lips and chin after her latest cosmetic injectables treatment.

The 28-year-old has just had a procedure to dissolve the filler in her lips, and the swelling will still take a few days to go down.

“They look good,” she says, despite her lips appearing even plumper now than when she arrived.

Emily started using fillers to pump up her pout about five years ago.

But late last year, she noticed her lips had become red and puffy, even though she hadn’t had any fillers for at least two years.

Scans of her face showed not only had her filler not dissolved in that time, but it had migrated outside her lips, towards her nose, and down to her chin.

It was “disheartening”, “expensive” and “didn’t look good at all,” she says.

It’s a problem that Melbourne-based cosmetic physician Gavin Chan has seen over and over again, he tells Catalyst.

The biology of ‘beauty’

The pursuit of youth and beauty has changed at an unprecedented rate in the past 30 years, aided and abetted by cosmetic procedures like anti-wrinkle injections and fillers, and technology.

Emily is one of the millions sharing selfies of themselves on social media every day — showing them with lips magically plumped up like cushions, smoother skin, narrower noses, and wider eyes bordered with luscious lashes.

While many of us like to believe that beauty is both elusive and subjective, there are some consistent biological markers of attractiveness that are determined by primal instincts.

Generally speaking, the “beauty formula” includes things like symmetry, proportion, and a face that shows signs of youth, strength and health.

For men, it can be found in typically masculine features, like a prominent brow ridge and a large jaw.

This shows a high level of testosterone and therefore dominance — an attribute that women subconsciously look for when picking a partner, psychologist Danielle Sulikowski says.

“The male face signals things about your level of testosterone. Which is about how strong and fit, but also potentially about how aggressive you are.

“So in male faces, women tend to find men that are kind of medium level of masculinity most attractive.”

In women, beauty is defined by full lips and high cheekbones.

“The more feminine the face is, the higher that woman tends to be on female sex hormones and the more fertile she is.”

Of course, there are socio-cultural factors that also influence beauty ideals, but many of these trends are influenced by what science tells us is beautiful.

Kylie Jenner’s famous lip filler confession, for example, led to a 70 per cent increase in lip filler enquiries at some clinics.

And the full-lip look aligns very well with evolutionary explanations of attractiveness.

Social media filters offer a ‘better version’ of ourselves

Until the 20th century, if you missed out on great bone structure and a perfect pout, there was little you could do to change things.

Now people can easily and seamlessly alter their image to present a better version of themselves.

It can be as simple as using clever photography angles to achieve a more aesthetically pleasing picture that aligns with scientific beauty ideals.

“I’m sure you’ve noticed that people on Instagram are taking photos from up high,” Dr Sulikowski says.

“What happens is when you take a photo from that angle, it has the same effect on the perspective of the face.

“It makes it look like you’ve got the big eyes and the pointy, narrow chin.”

There are also countless filters that can transform any face into a Hollywood glam morph of Angelina Jolie and Kim Kardashian.

At first, filters on phones were funny; with one swipe any human face could be adorned with rosy cheeks, bunny ears, and buck teeth.

But as they’ve become more popular and widespread, what was once a chuckle has started to have a more sinister effect.

These filters celebrate and reinforce a narrow view of beauty, and are inadvertently helping to drive the growing appetite for botox and fillers.

A few years ago, a London-based cosmetic surgeon coined the term “Snapchat dysmorphia” after noticing a growing number of patients wanting cosmetic treatments to help them look like filtered versions of themselves.

The pandemic hasn’t helped. People have been forced to stare at and critique their own faces via Zoom for work, or they are doing it voluntarily and taking social media selfies to pass time.

In Australia, cosmetic physicians reported a spike in new patients wanting to change their appearance once lockdown restrictions were lifted.

Injectables — like anti-wrinkle injections and filler — are deemed to be a more affordable, accessible and less invasive option than surgery.

Anti-wrinkle injections are made of botulinum, a toxin that temporarily stops muscles working by blocking nerves.

Dermal fillers are made from a range of substances such as hyaluronic acid,  which is found in skin and cartilage.

Dermal fillers in particular can drastically change a person’s face — from “liquid nose jobs” to enlarging lips, or even changing the shape of a jaw.

Doctors and nurses can currently administer these treatments in a range of settings — from shopping centre beauty salons, to boutique cosmetic clinics, and even medical practices.

Increased competition has driven prices down. Getting filler in the lips can cost as little as $150 and be done during a lunch break.

But there is growing concern that cut-price business models relying on fast turnover are jeopardising both safety and standards, and encouraging over-injecting.

Doctors call out lack of training

Dr Chan entered the glamorous and lucrative world of cosmetic injectables 15 years ago, after pivoting from a career in anaesthesia and emergency medicine.

While fillers can only be administered by doctors or nurses, Dr Chan says “there’s no real huge training course or exam to pass.”

“I literally went from doing a one-night course doing fillers, to injecting pretty much the next day.

“The training is provided by the filler manufacturers. So it’s a bit biased,” Dr Chan says, adding that this training model is still popular today.

To work in injectables, at the very least you need a degree in nursing, but don’t have to have ever worked as a nurse. To gain accreditation as a cosmetic physician requires a two-day course.

When he started out in his new career, Dr Chan worked as a trainer for filler and botox manufacturers and encouraged trainees to use up to 15ml of fillers in a single session.

He now describes this common practice as “ridiculous amounts”, and refuses to inject more than 1ml into the whole face.

This backflip came after several new patients began turning up at his clinic, complaining their fillers were not dissolving and had changed shape, causing puffiness and lumps around the eyes and lips.

Filler manufacturers and medical injectors assure their clients that fillers should last between six to 18 months, yet all of Dr Chan’s patients like Emily hadn’t had a filler treatment for at least two years.

So he teamed up with Melbourne-based radiologist and cosmetic doctor Mobin Master to take a closer look.

Dr Master’s study was one of the first to demonstrate how magnetic resonance imaging (MRI) can be used to detect filler and create a “map” for dissolving it.

“We put them through the MRI scanner and what we found was really staggering,” Dr Chan says.

“We found that filler lasted for two years, anywhere up to 12 years. So it’s a massive difference to 18 months.”

Dr Chan says spruiking the research, and his new view on “over-filling”, has made him unpopular among many of his peers.

He now advocates for no more than 1ml to be used on the entire face per session, and to lengthen the time in between treatments.

“It’s not great for filler sales,” he says, explaining that he often turns patients away who want more filler.

The science of beauty 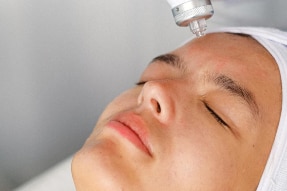 We know that looking after our skin is important — but does it really need all these treatments? We take a look in a four-part series:

Clinics make a lot more money by injecting filler every six months and for using up to 15ml per session.

“This is a really common scenario, I see this all the time. Especially when you have clinics, which offer very, very cheap prices per mil, and they need to get patients in and out quickly,” Dr Chan says.

“There’s no question of whether they need it or not. It’s, you come in, you pay your amount for your 1 mil [in the lips], you get it done.

“It might only be three months since your last injection.”

Dermal fillers can be partially or completely removed with an enzyme called hyaluronidase, and it typically requires one to three treatments.

Before seeing Dr Chan, Emily had had six fillers spaced six months apart up until two years ago.

“I wouldn’t be surprised if every drop of filler she’s ever had is still there,” Dr Chan says, pointing to the white patches on her scan.

Emily recalls: “I guess now if I look back, the injections were all quite rushed. There was no aftercare or anything like this.

“So I guess it’s a bit more of a dollar sign to them, which is upsetting.”

Despite this painful and costly experience, Emily hasn’t sworn off getting more filler, but says she will change the amount she gets injected, and the frequency of the injections.

Catalyst’s Forever Young? The Rise of Injectables airs at 8:30pm on February 22 on ABC TV, or you can catch up later on iview

Want more science from across the ABC?

Science in your inbox

Get all the latest science stories from across the ABC.