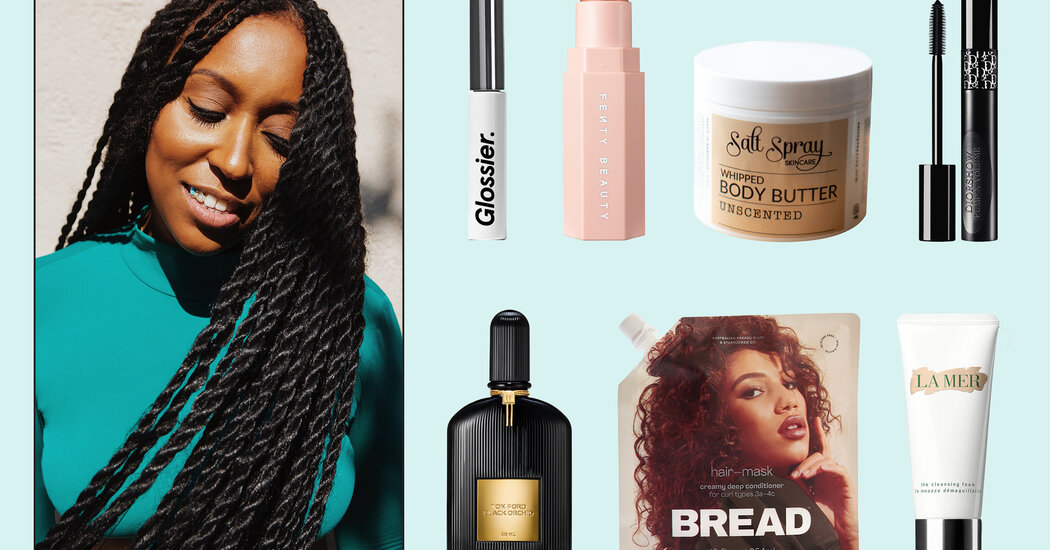 Welcome to the T List, a newsletter from the editors of T Magazine. Each week, we’re sharing things we’re eating, wearing, listening to or coveting now. Sign up here to find us in your inbox every Wednesday. And you can always reach us at [email protected].

For the first installment of the T List’s beauty column, which will appear in the newsletter on the first Wednesday of every month and detail the products and treatments that creative people swear by, the stylist Shiona Turini speaks about her daily routine.

With sensitive, combination and acne-prone skin, I focus less on makeup and more on skin care. It all starts with face wash, and my go-to is La Mer’s Cleansing Foam. This cleanser is it for me: It’s made a huge impact on my skin’s texture and tone. After that, I use La Suite Skincare’s Botanical Brightening Pads on the areas where I break out — they contain kojic acid, arbutin and emblica, which helps calm redness. Next, I massage Aesop’s Lucent Facial Concentrate, a lightweight serum with hints of rose petal and other antioxidant ingredients, into my skin, which leaves it feeling replenished and hydrated. Moisturizer is one of my won’t-go-a-day-without products. I swear by Christine Chin’s Cell’Liquid Gold face lotion and religiously use Nivea Shea Daily Moisture on my body. I’ve tried so many expensive lotions and always come back to Nivea. For drier areas, like my heels and elbows, I like Salt Spray Soap Co.’s Whipped Body Butter, which I stock up on every time I go home to Bermuda (I’m a true island girl). Day to day, I don’t wear a lick of makeup, but every now and then I love a swipe of Dior’s Diorshow Pump ‘n’ Volume HD mascara, a tap of Fenty Beauty’s Match Stix Glow Skinstick and a touch of Glossier’s Boy Brow. When it comes to hair, I’ve been wearing braids and twists for the last five years and pamper those protective styles with Sunday II Sunday’s apple-cider-vinegar-infused Root Refresh Micellar Rinse, perfect for when I’m between washes, and its peppermint oil-infused Soothe Me Daily Scalp Serum, a cooling everyday treatment. If I’m going to wear my hair curly, I use Bread Beauty Supply’s Hair-Mask: It gives my curls definition without leaving them crunchy. And before running out the door, I always spritz on Tom Ford’s Black Orchid perfume, which has notes of black truffle, ylang-ylang, bergamot and black currant: I like scents with a little bit of spice.

This interview has been edited and condensed.

A Japanese Deli Opens in Manhattan

On any given day, passers-by can stop and ogle the massive flank of bluefin tuna or the spiny orange legs of an eight-pound king crab in the window of Noz Market, a newly opened Japanese delicatessen on New York’s Upper East Side. Walking through the door reveals even more ocean fare, most of which — including Hokkaido uni, squid legs, hamachi kama (yellowtail jaw), botan shrimp and house-cured bottarga — is imported from Tokyo’s Toyosu fish market. The shop, which had its soft opening in December, was born of the success that the master sushi chef Nozomu Abe of the Michelin-starred New York restaurant Sushi Noz found in reinventing his menu for delivery in response to the city’s indoor dining restrictions: When the storefront next door emptied, his team took it over and set about curating a spread of sashimi and sushi boxes, soups, teas, caviar, homemade sauces and myriad fillets to go. Now, home cooks have access to delicacies, like Tasmanian salmon and Japanese rock oysters, that were previously only available at Sushi Noz’s hinoki counter. Perhaps the most delightful offerings, though, are the made-to-order hand rolls: To wait as they’re prepared is to witness a unique artistry — warm rice is smoothed onto crispy seaweed, then painted with wasabi and rolled alongside thin slices of fish into a cone. 1374 Third Avenue, New York, nozmarket.com.

I first fell for Wonder Valley in the kitchen, where I like to use the company’s peppery green extra-virgin olive oil for roasting root vegetables and dressing salads. The brand’s olives come from Lake County, Calif., where they’re milled on the younger side, which gives the oil a brighter taste, a longer shelf life and more antioxidants, according to its founders, Jay and Alison Carroll, the latter of whom spent years working for the California Olive Oil Council, where, she says, she became “enamored with the history, the mythology and the endless benefits of this age-old product.” After the couple’s first harvest in 2014, she began to experiment with the oil as a facial moisturizer, which eventually evolved into a beauty line, and now Wonder Valley has become a staple in my bathroom, too, where I use the milky cleanser to wash my face and the hinoki-scented body oil after every shower (both contain olive oil, of course, alongside other botanicals). Recently, the company released a powder exfoliant that’s meant to be mixed with the cleanser: Packaged inside a clever togarashi-inspired canister, it’s made from olive stone, lotus seed, green tea, lemon peel, bamboo and rice, and feels nice and rough as it sloughs away dry winter skin. “It’s the ubiquity of olive oil that I love so much,” says Alison, “from its use in folklore remedies to its exalted role in anointing Olympians or as an anti-aging solution for queens and pharaohs.” $58, welcometowondervalley.com.

The colonial city of Oaxaca has always been one of Mexico’s artistic wellsprings. It’s the birthplace of Rufino Tamayo, one of the country’s most important 20th-century painters, and its creative heritage dates back to the pre-Columbian era. Over the last decade or so, the city has welcomed a fresh influx of artists and designers who are attracted to its easygoing pace, spacious interiors and proximity to the surrounding mountains — and with them, a new wave of restaurants, cocktail bars and hotels, among them the 20-room Pug Seal Oaxaca, which opened late last year. Situated in a 19th-century villa in the heart of the city’s downtown, and just a few blocks from the Baroque Oaxaca Cathedral, it offers rooms with marble tile floors and walls painted in rustic brush strokes of pale blue, burnt orange and golden yellow, along with Art Deco-inspired furniture. Each one opens onto the property’s courtyard, whose walls are covered in exuberant pastel murals by the artist Rafael Uriegas, with motifs inspired by the myths of the region’s Zapotec people. Though Pug Seal’s restaurant and bar remain closed because of the pandemic (with the exception of breakfast, a vegetarian-friendly spread of contemporary Mexican dishes like hibiscus-flower omelets and green enchiladas with huitlacoche), the hotel’s central location means a host of top-notch local culinary institutions are within walking distance, including Las Quince Letras and Pitiona, both of which offer outdoor seating. Rooms start at about $150 per night, pugseal.com.

In my home state, Oregon, sneakers are a big deal. It’s where Nike was founded in the ’60s, and where Adidas has kept its U.S. headquarters since the late ’90s — and so I’ve always had an affinity for sporty footwear. That’s why it was particularly fun to see so many retro-style sneakers on the spring 2021 runways. As part of his men’s collection for Celine, Hedi Slimane launched the Z Trainer, a calfskin high-top inspired by the basketball shoes of the ’80s and ’90s and available in black and white as well as in stark white, along with the CT-02, which comes in a range of graphic colorways, including one in red, white and blue and another in metallic gold and red (women’s sizing debuted last week). Then there were the ’70s-style nylon running sneakers — in bright yellow, crimson and pastel pink — released by Re/Done, the California-based brand best known for making jeans from vintage Levi’s. Loewe’s Jonathan Anderson also channeled that era with a new crop of Ballet Runners, which have an elastic cuff around the ankle that makes them part dance shoe and part track shoe. Meanwhile, Adidas teamed up with the British brand Wales Bonner to release a low-top Samba inspired by Jamaican styles worn in the ’70s that features a raw-cotton upper with light brown leather trim and hand-stitched detailing. With the latest New York Fashion Week having just ended, I can’t help but recall this time last year, when I was in Europe running from show to show: Any of these shoes would have been a practical, and stylish, choice.