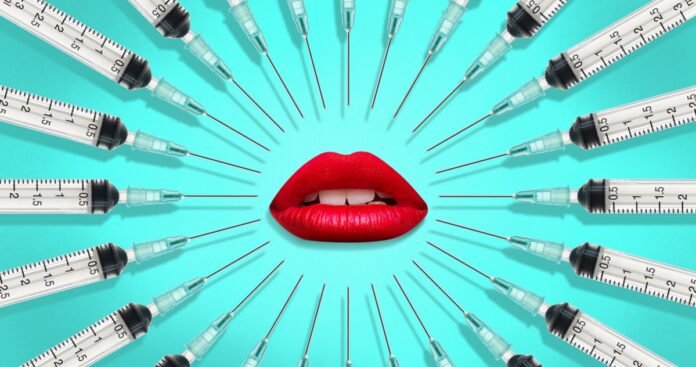 In June, Susie Sessoms got her first lip filler. In November, she tried Kybella, the “fat dissolving” double chin injectable. “I swelled up like a bullfrog,” she says. “It’s a good thing I didn’t have to go to work!” Like many office workers, Sessoms, a mortgage executive in the Twin Cities, has worked from home from March of last year. Her company doesn’t do Zoom, which made it even easier to get treatments discreetly. “I wasn’t concerned about catching Covid,” she says. Her medspa’s sanitization protocols make her feel safer than at the grocery store.

Like so many businesses in the pandemic, cosmetic surgeons took a big hit last March; there was less interest in beautification and more focus on shelter in place and toilet paper supplies. Across America, shutdowns for elective cosmetic work varied wildly; New York closed for three months, Minnesota for seven weeks, and so on. Some places never reopened. In July 2020, AbbVie, the pharmaceutical firm that owns Botox, reported a huge dip in global net revenues from sales of cosmetic Botox — down to $226 million, a 43.1% decrease from 2019.

In 2021, with the vaccine on the horizon, and an end in sight, people are turning their attention to the possibility of IRL meetups — and what impression they’ll give. The stress, inertia, and (for some) carb-heavy diet of the last year has left many feeling prematurely aged, out of shape, and saggy. That’s led to a boom in cosmetic procedures, which are now widely accessible, even amid shutdowns (in California you can’t get your hair cut but can have Botox). RealSelf.com, the “Yelp’’ for cosmetic surgery, says appointment bookings spiked 71% in October, and they are seeing this trend continue in 2021.

“Patients are taking advantage of the ability to hide with the masks.”

“A person’s physical attractiveness affects every part of their life,” says psychologist Norman Cavior; attractive people receive better treatment in school, higher salaries at work, and even better sentences in the courtroom. Cosmetic surgeons and dermatologists have leaned into this new normal with their marketing. Los Gatos, California-based RefinedMD started offering a $1,500 “Turn Back Time” Treatment Bundle last June (“Don’t we all wish to turn back time and cancel 2020!?”) and Serenity Med Spa in San Francisco offered a Post Quarantine Body Special. (Cosmetic treatments, surgical or nonsurgical, don’t typically take up available hospital beds — many surgeons operate private clinics, and while they may have hospital privileges in case of emergencies, they’re rarely used.)

In the beginning of the pandemic, the supply chain problems that plagued toilet paper, roller skates, and milk, affected some surgeons. “Botox has to be shipped on dry ice,” says Corey Hartman, MD, founder of Skin Wellness Dermatology in Alabama. “It was randomly difficult to source.” He was concerned that clients might stay away, but since he reopened, business has been better than ever, he says. He’s seen requests for fillers in particular — which fill in hollows, plump the cheeks and lips, and even shape the jawline or nose — increase 30% over pre-pandemic levels. “Patients are taking advantage of the ability to hide with the masks,” he says. In October he moved to a larger space and hired six staffers. He’s anticipating a busy summer, as things open up — along with a big wave of weddings and vow renewals — depending on the vaccine rollout, of course.

Zoom dysmorphia is a thing now, according to the Facial Plastic Surgery & Aesthetic Medicine journal; the focal length of webcams often results in the appearance of a rounder face and broader nose.

Meanwhile, in Colorado, plastic surgeon Dr. Gregory Buford’s schedule has been jam-packed since early January. “Our Botox numbers are up around 40%,” he says. “Normally, it’s crickets because everyone’s blown their budget on Christmas.” Buford attributes the growth in interest as a reaction to the feelings of helplessness that Covid created. “Procedures represent the ability to control how you look, and control over your life in general,” he says.

Body contouring is especially popular, says Buford. “It’s the Covid 15 — people have been drinking more, not working out.” Interest in neck and chin liposuction has also spiked, he says; all those daily Zooms have made people more self conscious. Zoom dysmorphia is a thing now, according to the Facial Plastic Surgery & Aesthetic Medicine journal; the focal length of webcams often results in the appearance of a rounder face and broader nose. Indeed, Alan Matarasso, MD, a professor at Northwell School of Medicine and former president of the American Society of Plastic Surgeons notes that, according to ASPS surveys, nose jobs and face-lifts were the two most popular procedures in 2020, replacing breast augmentation and liposuction, which topped the list in 2019.

Matarasso reports more inquiries than usual from college students seeking nose jobs, a demographic that usually defers their surgeries till the summer, due to post-op bruising and swelling. Now, “they can be back on their computer, attending class,” the following day, he explains. But as in-person classes resume in some states — Frostburg State University in Maryland begins IRL classes this Monday, for example — there’s a rush to get their surgery scheduled in time.

And cosmetic surgeons and dermatologists are expecting another big surge of procedures as vaccines get distributed — and we come closer to actually showing our faces to other people again. Alchemy 43, a cosmetic dermatology startup with four locations in Los Angeles and New York that claims to be among the “top 50 largest purchasers of Botox in the country,” reports a large bump in May 2020 when they reopened. Most were preexisting clients, who averaged $475 a visit. “We expect to see a similar bump in demand once the world reopens,” says CEO Nicci Levy, who plans to open three more locations by the end of the year. “People absolutely want to step back into the normalcy of their everyday life routines looking and feeling their best.”