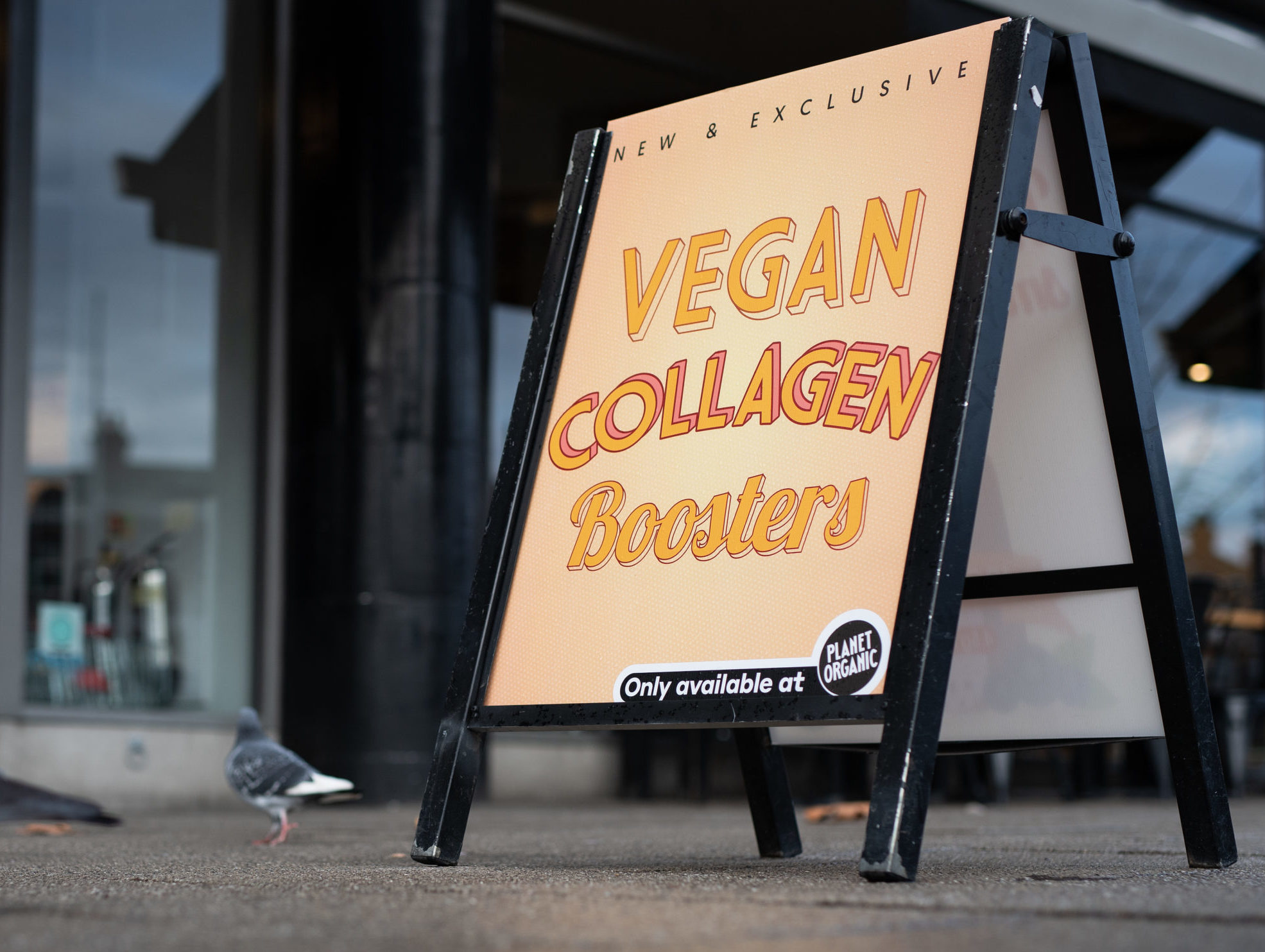 A sign advertising vegan collagen boosters is seen outside a branch of the Planet Organic healthfood store on January 03, 2020 in London, England. (Photo by Leon Neal/Getty Images)

Boiled pig trotters are the secret to younger-looking skin. Seriously. Thankfully, the beauty treatment is no longer quite so elemental — but the science remains the same. The essential ingredient is collagen and dermatology experts are adamant we all need a lot more of it if we are to ward off the visual effects of ageing.

“Pig’s feet: the new superfood.” So goes the headline of an article published 13 years ago, in March 2008 by The Telegraph. It kicks off with an interview with one Himi Okajima, who at the time had just opened a new Japanese restaurant in New York, Hakana Tonton, where “33 out of the 39 dishes contain[ed] pigs’ feet”.

“Collagen helps your body retain moisture. Your hair and skin will look better, but it’s not just for looking beautiful now. If you begin eating collagen in your thirties, you will look younger in your forties,” he told The Telegraph reporter. To which Lisa Miles of the British Nutrition Foundation responded: “It’s news to me, I’ve certainly never heard of eating collagen.”

Fast forward to 2021 and collagen supplements are all the rage. Pig’s feet not so much; except in culinary cultures where they were already loved, such as many parts of South Africa.

“If we look at our ancestral history, most cultures used to eat the whole animal from nose to tail … they didn’t have a convenience store down the road. In our throwaway society, we don’t eat the cartilage, the ligaments, the tendons, the offal; we don’t utilise the highly beneficial collagen that’s present in the parts that we actually throw away,” says Dr Maureen Allem, founder and medical director of the Renewal Institute and founding member of the AASSA (Aesthetic and Anti-aging Society of South Africa).

That is not to say she specifically recommends nose-to-tail feasting as the ideal way to get more collagen into our bodies.

“Bone broth is best but it’s time-consuming. You can make it from pork, beef, fish, and they also use chicken these days. But it takes between 12 and 24 hours to actually boil down those bones and then you have to leach all the nutrients out by adding vinegar. It’s quite inconvenient to cook,” notes Allem.

For most people, who simply don’t have the time, she recommends simply buying gelatine or collagen peptides, such as those in over-the-counter collagen powder.

Says Allem: “Collagen is made from skin, hard joints, all the other cartilaginous stuff from an animal. They take that and they process it and then you can make gelatine from that, which is actually quite cheap and freely available in comparison to collagen powders. But the disadvantage is that you have to dissolve gelatine in hot or warm water to get it soluble, whereas the more expensive collagen peptides have already been broken down into these amino acids, which is more easily digestible.”

But what is collagen? And peptides?

“Collagen is the most abundant protein in our bodies; it forms part of the fibrous connective tissue that gives our body structure. In our industry, it’s very important for skin, hair and nails, but it’s also very important for bones, joint and muscle health. It actually prevents muscle sarcopenia [age related muscle wasting],” she explains.

There are also different types of collagen in the body, which you’ll often see referred to on the labels of supplements as, for example, type I, II or III. Type II was discovered in 1969. By 2000, according to the book Molecular Cell Biology, whose fourth edition was published that year, “There [were] at least 16 types of collagen, but 80-90% of the collagen in the body consists of types I, II and III.” By 2011, that number had gone up to 28 according to a paper published by US’s National Center for Biotechnology information, titled The Collagen Family.

“In terms of the most important ones, you’re really talking about collagen I and III, which is what I’m most familiar with, because that’s the skin collagen,” says specialist dermatologist Dr Vanessa Lapiner.

“Collagen in your skin is very different from collagen in your joints and they need to function differently. There are certain products which will be type II collagen, which is geared towards people with arthritis or joint symptoms, and not really best for skin. For skin, you’re looking at a hydrolysed type I collagen. Hydrolysed means it’s just broken down into easily digestible protein particles,” explains Lapiner.

This easily digestible form is also referred to as collagen peptides. To break it down further, the key amino acids that make up collagen are glycine, proline and hydroxyproline.

“It’s those three amino acids that actually make collagen so beneficial … what glycine does to the body; it’s actually quite an amazing amino acid,” says Allem.

If my body already produces collagen, why do I need more?

Skin ageing is defined as a complex process that is influenced by both intrinsic and extrinsic factors. The former refers to genetics, cellular metabolism, hormones and other metabolic processes; for example, Lapiner explains that our fibroblasts, the cells in the skin’s dermal layer, make collagen become less efficient as we get older. The latter refers to factors that are more within our control, such as sun exposure, diet and smoking.

Allem frames the challenges to collagen production within the parameters of what she calls the five pillars of health, namely: sleep, gut health, nutrition, stress management and exercise.

“Not just sleep, it has to be deep sleep restorative sleep. That is when your growth hormone kicks in to restore the body. That’s why sleep is the foundation of health,” says Allem.

In particular, however, she emphasises the importance of a good anti-inflammatory diet: “Food choices which are highly inflammatory are obviously going to break down collagen, like sugar for example. It causes advanced glycation, which is essentially the gumming up of our collagen.”

Numerous research papers have linked sugar to aging through the process of glycation, such as this 2010 study published by the US National Library of Medicine.

“Processed foods, sweet cakes, chocolates, pastries and other foods with high sugar content cause advanced glycation. Another huge influence in the modern-day diet was when they added industrial seed oils like canola and sunflower oil. All those oils are very detrimental. Then there’s processed meats: hot dogs, salami cuts, lunch meats; they’re all high in nitrates and chemicals which lead to inflammation. What we drink is also really important. So, once again, the sugary drinks, sodas, the sweetened beverages; and too much alcohol,” explains Allem.

“There are many more reasons why you slowly lose the collagen content of your body, but those are some of the main ones and that’s why we tell you to try and take collagen supplement to augment the bodily processes.”

What about vegans and vegetarians?

While there is a range of products branded as ‘plant-based collagen’, it is not quite the same thing. Plants themselves do not produce collagen and while collagen can be genetically engineered using bacteria and yeast it is not a widespread practice. The vast amount of what is marketed to vegans and vegetarians in pursuit of collagen supplementation are compounds that boost the body’s collagen production.

“Vitamin C and anything that’s very high in antioxidants is going to help prevent the breaking down of your collagen, from aging or inflammation or oxidative stress,” says Lapiner.

“And that’s things like resveratrol in red wine, green tea and all your goji berries. And they’re also proteins that are very important, ones that have glycine, proline and hydroxyproline; we can use those to produce more collagen,” she explains, highlighting the three amino acids that, combined, make up the biggest part of collagen.

According to Allem, glycine plays the biggest role in the make-up of collagen. “Glycine powder is also much cheaper and a lot of the health benefits of the collagen powder come from the glycine content, which is an amino acid that makes up more than a third of collagen.

“It calms nerves, feeds the brain, promotes restful sleep, fights fatigue and fights the effects of stress and anxiety. It also slows the effect of aging because it stimulates the secretion of growth hormone, the anti-aging hormone that slowly starts declining with age,” she adds.

Besides meat and fish, other foods considered good sources of glycine are dairy and legumes. Glycine can also be taken as a supplement. However, for those on a plant-based diet, it is important to do some research to find out if it is synthetic, plant or animal-based. When it comes to vegan collagen, most of the products are collagen boosters containing vitamin C and amino acids.

That said, the collagenous matrix is more than just glycine. Proline, hydroxyproline and the other amino acids have their roles within the matrix. According to a 2011 study published by the US National Library of Medicine, titled Proline and hydroxyproline metabolism: implications for animal and human nutrition, “Proline plays important roles in protein synthesis and structure, metabolism and nutrition, as well as wound healing, antioxidative reactions and immune responses … proline and hydroxyproline are unique amino acids for maintaining cell structure and function.”

The growing body of research would seem to suggest collagen is a kind of wonder supplement with numerous advantages that we should take. Allem recommends it to her patients to help “augment the body’ processes” of collagen production.

However, both Allem and Lapiner emphasise the importance of healthy lifestyle choices as the first step to maintain collagen, along with boosting its production. When it comes to skincare from one’s 20s onwards, Lapiner recommends thinking of it as a sort of skincare pyramid.

“At the base layer of your pyramid are your fundamentals: sunscreen, antioxidants and a good diet; you want to protect what you have. And if you want to do a little bit more you go to your next level, which is what I call the transform level. These are things like retinoid; if you talk about hydrolysed collagen versus retinol, which is a topical vitamin A cream, there’s just no comparison. Vitamin A is the holy grail of collagen production, in that it boosts collagen production. We know it’s anti-aging and, after sunscreen, that’s what we as dermatologists are going to recommend to our patients.”

Indeed, numerous studies have concluded that topical application of vitamin A cream leads to a boost in collagen production, such as this 2007 study by researchers from the, University of Michigan Medical School’s Department of Dermatology, which said, “…topical retinol improves fine wrinkles associated with natural aging. Significant induction of glycosaminoglycan, which is known to retain substantial water, and increased collagen production are most likely responsible for wrinkle effacement. With greater skin matrix synthesis, retinol-treated aged skin is more likely to withstand skin injury and ulcer formation along with improved appearance.”

The next level, according to Lapiner, is about protecting your skin barrier: “If you’re stripping [your skin] with harsh cleansers, or if you are over-exfoliating, or you’re prone to acne and eczema, you really want to focus on reinforcing and protecting the barrier. And there you want to use the same things that the skin barrier is normally made up of, so you’re looking for ingredients like ceramides, squalene, free fatty acids, cholesterol … they’re called skin identical ingredients. Hyaluronic acid is another one which draws water into the skin.”

In her view, supplementation with actual collagen, specifically for skincare, although harmless, is higher up in the pyramid and not nearly as important as the foundation of healthy lifestyle choices and using vitamin A topically to boost collagen production.