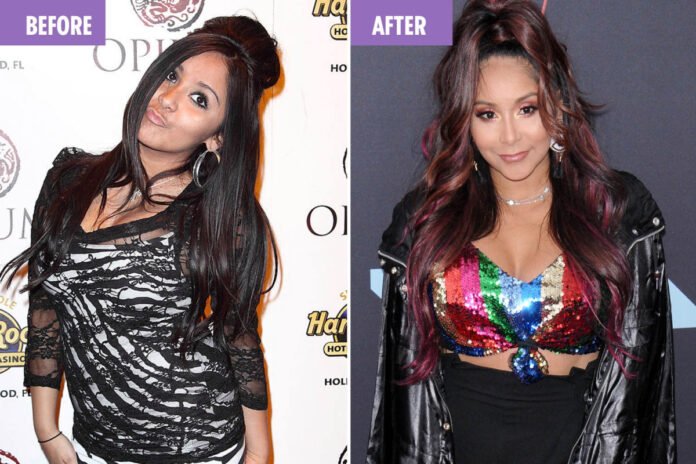 CHECK out the changing faces of the cast of Jersey Shore since the show began over 11 years ago, as OG stars Snooki and Angelina admit to plastic surgery.

Time has passed, babies have been had and new boobs have been bought but who has admitted to going under the knife to enhance their natural assets?

It’s hard to believe MTV’s reality show Jersey Shore burst onto our TV screens over 11 years ago, all the way back in 2009.

And although it came to an end in 2012, the cast have stayed in the limelight – and in our hearts – when they got back together for 2018’s Jersey Shore Family Vacation.

Over the years some of the cast have enhanced their boobs or butts, while others have kept it simple and opted for a little tweak of Botox or fillers.

So who’s had what done and who shared the experience with their millions of social media followers?

Snooki’s always been honest about what cosmetic procedures she’s had done over the years.

In 2015 she told fans she’d had lip filler injections. She wrote on Instagram with a photo of her new lips: “First session of lip plumps and it’s just fabulous.

“I’ve always hated my thin lips and never thought I had the balls to get needles in my lip to perfect them but I did!

“I love my ‘natural beauty,’ but being able to enhance my lips to make me feel better about myself is life.”

The following year she tried out Botox and got her boobs done. Since then she’s continued with the Botox and filler and honed the once orange fake tan to a natural sunshine glow.

In 2019 Ronnie revealed on an episode of The Doctors  that he went under the knife to get liposuction abs citing he didn’t have time to get down the gym as much.

“I’ve always been a workout fanatic, and I’ve also always been in shape, but it takes a lot of hard work to stay in shape,” he said.

“One year ago today my life completely changed. I had a little baby girl. She’s like my guardian angel, and now I can’t spend two to three hours every day in the gym like I used to.”

Angelina recently said of her fabulous figure: “I don’t do squats. I haven’t done one squat in like years and I’m not going to do squats.

The Jersey Shore star has never been shy about her cosmetic procedures, which includes a boob job, fillers, Botox and also a butt-lift.

The 34 year old even live streamed the procedure on social media. Angelina said: “I’m never going to lie to the fans or anybody that’s going to DM me.

“I’m going to be honest. And that’s really how I want to be forever.

JWoww has definitely enjoyed the effects of plastic and cosmetic surgery over the years after confessing to her boob job for her 21st birthday.

Going from a B cup to an F cup / DDD cup, the star has also had lip filler, Botox and rumored to have had cheek implants to sculpt her face.

Then years later, the star enhanced her chest again following the birth of her daughter, Meilani.

JWoww is perfectly happy to tell her fans what’s she had done. In 2016 she told Entertainment Tonight: “I’m 31 years old. I’m not getting any younger. I’m going to do the non-invasive surgeries and things like that to stay youthful, so I don’t — when I’m like 50, 60, 70 — have to do the more dramatic ones.”

Mike ‘The Situation’ Sorrentino has never admitted to having plastic or cosmetic surgery of any kind but his wife has.

His wife Lauren decided to have rhinoplasty before walking down the aisle to marry the reality star.

She wrote on Instagram: “Growing up my nose was one of my biggest insecurities. I just wasn’t happy with it, simple as that.

“Once Mike and I began the wedding planning process I thought of every single detail, especially how we both would look in our wedding photos that we’d share and cherish forever.”

Vinny has also never revealed to fans if he’s had any work done over the years although fans have long suspected that he might have had a nose job.

In the premiere episode of Jersey Shore Family Vacation, Vinny revealed he follows a strict exercise routine and has been following a ketogenic diet to maintain his good looks.

Since leaving Jersey Shore Sammi has been living her best life out of the public eye.

And to be honest, Sammi looks hardly any different from when she did 10 years ago, other than doing her eyebrows differently, which can change a face drastically.

Sammi even clapped back at one follower who said: “She looks totally different now. Doesn’t even look the same. Smh.”

She replied to the rude comment: “Guess old age will change ya,” along with that shrug emoji.

The hunk has never admitted to having work done but Dr. Anthony Youn, who has not treated Pauly D, told The Sun that it appears he “may have undergone some cosmetic procedures.”

The holistic plastic surgeon said: “I suspect that he’s had a conservative upper eyelid lift, as his eyes aren’t as hooded as they used to be.

“He also appears to have had some Botox injections in his forehead, smoothing it out and creating a distinctive arch of his eyebrows.”

Don Gilet barks ‘it’s not about shouting!’ at Alex Jones in awkward interview