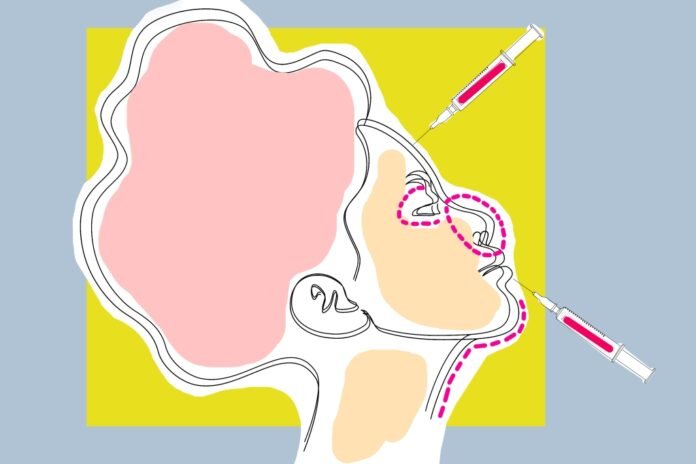 Breast augmentation has been the top cosmetic surgical procedure since 2006 — until the pandemic hit, that is. In 2020, the face became the focus, and it continues to be today.

The top three cosmetic surgical procedures of 2020 — in order — were nose reshaping, eyelid surgery and facelift (followed by liposuction and, lastly, breast augmentation), according to the American Society of Plastic Surgeon’s latest “Plastic Surgery Statistics” report.

Surgeons suspect it’s due to the “Zoom Boom,” with Americans examining their reflections more than usual on online video services while working from home amid COVID-19.

“People started noticing more and more features about their face that they, I would say, necessarily didn’t quite notice beforehand, just because now all of a sudden they were seeing themselves on camera so much more frequently than in years past,” says board-certified plastic surgeon Dr. Josef Hadeed, speaking about ASPS’ report. He’s been an active member of the nonprofit, the world’s largest plastic surgery organization, for nearly a decade.

“Breast augmentation historically has been number one or at the top of the pack,” Hadeed continues. “Now in my own personal practice, I have seen a dramatic increase — and this is back in 2020 — in the number of facial procedures performed.”

He anticipates seeing the same trend in the 2021 report when it’s released.

“All of 2021, we have noticed an increase in the number of requests for facial surgeries,” he says. “My suspicion is that you’re going to see the number of overall cosmetic procedures increase in 2021, compared to 2020. But I also suspect that the number of facial procedures in particular is probably going to be higher than for breast or body, and I think that’s all related to, again, people being on these video conference calls and seeing themselves on camera more.”

It’s in Beverly Hills, where maintaining a camera-ready face is a full-time job, that some of the leading U.S. facial surgeons reside, including Dr. Raj Kanodia — the “Nose King.”

Kanodia is who Khloé Kardashian went to see for her new nose, along with Jen Atkin, Camila Coelho and a slew of young YouTubers and TikTokers, including both D’Amelio sisters.

“I do a lot of 15-, 16-, 17-year-old patients who are motivated because they see themselves in Zoom calls for school, Instagram, TikTok and they want to present the best of themselves,” says Kanodia, a board-certified plastic surgeon who specializes in closed rhinoplasty (surgery is done inside the nose, free of scarring) and facial rejuvenation. “Last year was one of my busiest years out of 40 years of practice.”

“My obsession and passion is to be able to refine noses, not change noses,” Kanodia goes on. “I like to preserve the integrity of the character of the nose.”

The end goal is for the patient to look as “natural” as possible, says Dr. Ben Talei, known for his $75,000 “AuraLyft” technique at the Beverly Hills Center for Plastic & Laser Surgery. He’s featured in Gwyneth Paltrow’s Goop guide of cosmetic surgeons as Beverly Hills’ “best for face.”

“It’s an advanced, deep-plane lift that really gives the biggest lift that exists in the world, but it’s also the most natural with the least amount of scarring,” Talei explains. “The ideology has changed dramatically from pulling and muscle tightening and stretching to, now, the idea is that we release the saggy plane from the lower plane and reposition it superiorly without pulling on it. It’s safer, faster recovery and way more natural.”

Business has been thriving, he reveals.

“By far, popularity for face-lifts increased over this past two years,” he says. “They increased pretty dramatically.”

Locally, he’s visited by the Beverly Hills and Malibu crowds, he says, “socialites, people who are very concerned with how they look at all times,” and celebrities.

“There’s so many cancellations for public figures that they’ve been the ones who really have been coming and getting face-lifts and things that really need recovery time,” says Talei, who notes there’s been a notable increase of men getting the procedure. “I’ve seen a lot more actors, singers, producers, sports figures.”

Patients’ ages range from 45 to 55 years old: “That’s pretty standard, especially now that we’re doing more deep plane. It’s more of a soft tissue surgery rather than a skin surgery, meaning we’re not just dealing with wrinkles, which is what the old-school ones did. We’re dealing with drooping. And we’re actually able to treat younger patients who don’t necessarily suffer from aging signs, but just have droopiness, because of structure or acne or being born with a gooseneck. We have these patients coming in who are in their late 30s, early 40s.”

For Dr. Jason Diamond — who specializes in facial plastic surgery in Beverly Hills — neck-lifts and jawline tightening have been the most popular lately in his practice. Patients interested in that area of the face are usually aged from the early 40s to mid-70s.

“As people get older, then they typically want to do their eyelids with it or their brows with it or other components with it,” he says. His long list of celebrity clients includes Katy Perry, Chrissy Teigen, the Kardashians and Jenners. (In October, Kendall Jenner was photographed leaving his office while trying to be incognito in a sheet mask, face mask and sunglasses.)

“It’s been a very busy surgical time,” he continues. “I’m doing a lot of everything, because so many people can hide behind masks and work from home — rhinoplasty, eyelid and brow lifts, cheek implants.”

Diamond offers customized facial implants, a technical advancement in the field, he says: “We build an implant that fits just for that person for whatever it is that they need.”

When it comes to lasers, CO2 is at the top.

“It’s the most powerful, effective laser,” he says. “It is the one that works. It’s the one that gets rid of lines, but it does create a lot of downtime. It creates a significant red appearance for anywhere between seven and 10 days. You look really red and pretty ugly while you’re healing, but the results are unparalleled. The results are far superior to the current-day Fraxels and Pixels and laser Genesis and all these things that you’re going to hear about. The CO2 results are far and away — you can’t compare them. They’re so much better. Those other things have much less downtime, though, but they require multiple treatments.”

Another development in the industry has been extracting elements from fat to enhance the healing of a face-lift, called nano fat.

“We’ve been doing fat injections during face-lifts forever,” says Diamond. “However, we’ve gotten better at extracting, filtering the fat to make it more concentrated with the good components. It’s all liquid, the best parts that allow for possibly faster healing, possibly a little bit of a boost to skin while you’re doing a face-lift.”

Along with facial surgeries, there’s been a rise in minimally invasive facial treatments, according to the surgeons, with Botox and fillers. Diamond takes it to another level with his “Diamond Facial Sculpting,” using injectables to sculpt the face, and his “InstaFacial.”

“We start with a light laser, and which laser just depends on the person,” he explains. “Sometimes I use one that softens brown and red spots, or I use one that’s better for pores and texture. Sometimes I use a combination of lasers, but it always starts with laser. Then we draw your blood, and we treat the blood. We essentially filter out all the metabolic component of it. We take just the nutrient-rich components of the blood. When you’re looking at it, it’s a transparent, golden color. And then I’ll inject that in multiple locations underneath the skin. And then, after I’ve injected it, I’ll lay it on the skin, and I’ll use needles to penetrate into the superficial layer of the skin widely throughout the face. Oftentimes, I do the neck and chest as well. And then we place a micronized medical-grade collagen mask on to let the collagen penetrating in and sooth everything. It’s a four-part treatment.”

There’s no downtime and patients leave glowing after an “InstaFacial,” whose cost varies depending on the treatments. Diamond charges $1,000 for a consultation, which a patient is able to be apply toward the cost of any treatment.

“The pandemic has been some of the busiest times of my career,” says Diamond — who’s become a celebrity of his own with known names across entertainment often posting on social media about their visits to his office. “It’s been extraordinarily busy.”