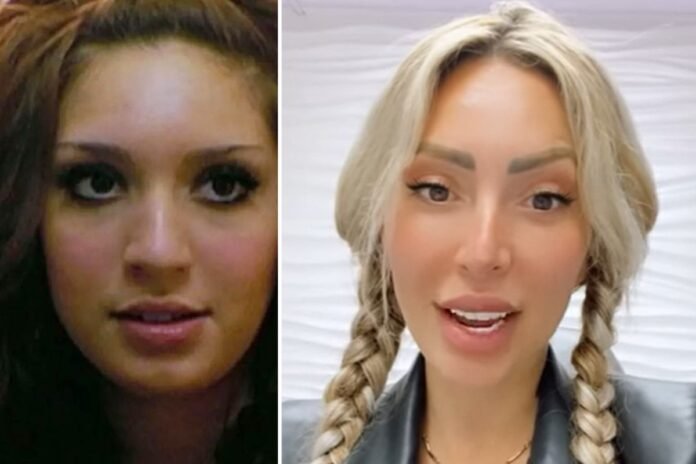 FARRAH Abraham looks unrecognizable in a throwback photo from her teenage years.

The Teen Mom OG alum, 30, has faced a slew of backlash in recent months for appearing to overdo it with the plastic surgery.

Amid the controversy, Farrah shared an old photo of herself as a 16-year-old.

The fresh-faced teen looked worlds away from her appearance now, with dark hair and minimal makeup.

She teamed the photo with a comparison snap of her now at the age of 30, wearing pink eyeshadow and with blonde curly extensions.

The Teen Mom alum shared the post on her Instagram Stories and captioned it: “30 looks better on me than 16.”

It comes after weeks of fans telling Farrah she has gone “too far” with the plastic surgery and begging her to go back to a natural look.

She is no stranger to plastic surgery and has undergone numerous cosmetic improvements.

She underwent a breast augmentation in 2010 and had a rhinoplasty.

The TV personality got a chin implant in 2012, before undergoing a 40-minute procedure under local anesthesia to remove it a year later.

🍼  Follow all our latest news & stories on Teen Mom.

Farrah then underwent a second breast augmentation in 2013 to increase her cup size from C to D.

Then in 2015, she underwent a third boob job to correct a previous botched procedure.  She has also admitted to getting Botox and fillers in her face.

Farrah previously described her body makeover in her book, Dream Twenties: Self Guided Self Help Memoir.

She wrote: “Yes, it’s true, I got plastic surgery and with that responsibility and freedom, there is a lot I learned.

“I am grateful I got to show or document pretty much my first to my last procedure publicly. That includes even the mess-ups.

“There will be those insecure times with plastic surgery, where it’s not like the amazing boob job that just changes your world where life is going to stay sunny and pour money all over you, no I’m talking about when I got a chin implant.”