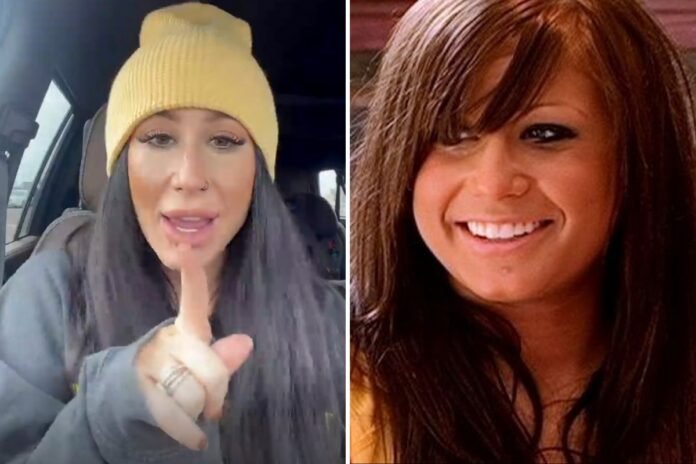 FANS begged Chelsea Houska to slow down on the fillers and botox after commenting that her face looks “droopy” on a new video.

The Teen Mom 2 star was recently accused of getting lip and cheek fillers by fans who have begged her to return to her natural look.

Chelsea, 30, faced even more backlash after sharing a new video to her stories on Tuesday.

The reality star addressed the camera while wearing a Nirvana sweatshirt and yellow beanie.

“Okay so I was just at Ulta, again, I went twice in one week, I went back for another one of those huge sponges and they were all gone.

“So whoever went and snatched those up, I’m mad now.”

Chelsea then went on to show off her makeup haul, including a “cream bronzer, a cream blush, shape tape concealer, brow glue, a lippy stick from Colourpop, and a random brush.”

The TV personality then paused her reveal to tell fans she had something in her “eyelash”, as she pulled her left eye down to clear the debris.

However, fans were much more concerned with Chelsea’s face during the videos, as they raced to Reddit to slam her for going overboard on plastic surgery.

“Ughhhh Chelsea come on girl, stop f**king with your face,” one pleaded.

“Handsome squidward is all I see when I look at her. Chelsea, you f**ked up,” a second remarked.

A third ripped: “She’s starting to look like a plank of wood with facial features.”

“Oof droopy first pic..Enough with the lashes plz,” another asked while a fifth admitted: “Her injector did her dirty. It’s time to STOP, Chelsea.”

“What happened to her lips?” a final inquired.

Last month, fans accused Chelsea of getting both “lip and jaw fillers” as they compared photos of her past and present.

One follower took to Reddit to share a side-by-side comparison of the reality star, with two separate screenshots of her talking on her stories set four years apart.

In the first clip, the TV personality addressed the camera in 2018, while speaking about her pregnancy with Watson.

Chelsea explained how she had “gained a lot of weight” at that time while wearing a white sweatshirt and her red hair tied up in a ponytail.

The mother of four looked very natural in the video, her face rounder, and more normal-looking.

In the second clip, the MTV star took over another account’s Instagram stories to do a “day in the life segment.”

Chelsea wore a baggy California hoodie with her brunette locks tied up in a wild bun.

The TV star spoke about her normal breakfast routine, but fans noticed her face looked much more chiseled than in the prior clip.

Her cheekbones were much more defined, and she had less of the natural round glow.

Many took to the comments to discuss the differences between the two posts.

“Wow. She can hardly move her face,” one noted.

“Definitely has gotten jaw filler between these two videos,” a second mentioned.

“More lashes, more lips. It happens,” a third speculated, while another ranted: “I wish we could normalize women aging. I mean wear creams and stuff, but the constant fillers and stuff is just exhausting.”

One fan claimed that Chelsea had work done on other parts of her face as well, writing: “I think she changed something about her eyes.

“Is it called hooded eyes? It seems like she doesn’t have that anymore. Something is different IMO.”

While another agreed: “Yea looks like she perhaps went for an upper blepharoplasty.”

Chelsea and her husband Cole share their son Watson, five, and daughters Layne, three, and Walker, one.

Chelsea also has a daughter Aubree, 12, with her ex Adam Lind.