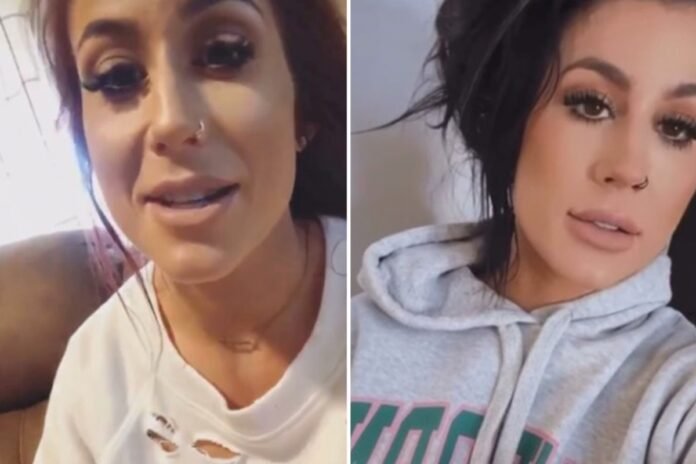 CHELSEA Houska has been accused of getting lip and jaw fillers after fans compared old videos to her current appearance.

The Teen Mom 2 alum’s husband Cole DeBoer was also recently slammed for getting botox as many have speculated regarding the couple’s plastic surgery ventures.

Chelsea, 30, was ripped for getting lip and jaw fillers after fans noticed the differences between her face in 2018 and now.

One fan took to Reddit to share a side-by-side comparison of the reality star, with two separate videos of her talking on her stories set four years apart.

In the first clip, the TV personality addressed the camera in 2018, while speaking about her pregnancy with Watson.

Chelsea explained how she had “gained a lot of weight” at that time while wearing a white sweatshirt and her red hair tied up in a ponytail.

The mother of four looked very natural in the video, her face rounder, and more normal-looking.

In the second clip, the MTV star took over another account’s Instagram stories to do a “day in the life segment.”

Chelsea wore a baggy California hoodie with her brunette locks tied up in a wild bun.

The TV star spoke about her normal breakfast routine, but fans noticed her face looked much more chiseled than in the prior clip.

Her cheekbones were much more defined, and she had less of the natural round glow.

Many took to the comments to discuss the differences between the two posts.

“Wow. She can hardly move her face,” one noted.

“Definitely has gotten jaw filler between these two videos,” a second mentioned.

“More lashes, more lips. It happens,” a third speculated, while another ranted: “I wish we could normalize women aging. I mean wear creams and stuff, but the constant fillers and stuff is just exhausting.”

One fan claimed that Chelsea had work done on other parts of her face as well, writing: “I think she changed something about her eyes.

“Is it called hooded eyes? It seems like she doesn’t have that anymore. Something is different IMO.”

While another agreed: “Yea looks like she perhaps went for an upper blepharoplasty.”

Last week, fans complained that the TV dad’s forehead looked “too smooth” when the busy mom shared a photo of him waiting for dinner at a restaurant.

“This picture of Cole is off and I can’t explain what it is,” one poster commented.

Another suggested: “Chelsea probably made him get Botox.”

A third commenter wrote: “His forehead wrinkles are filtered out,” with a laughing-crying emoji.

A fourth remarked, “His face looks like a mask and it’s unsettling lol.”

Earlier this month, fans noticed just how much Chelsea has changed since her heyday on MTV.

Shared to Reddit, a user collaged a recent photo of the couple with one from 2014.

In the old snap, the reality stars smiled and hugged as their relationship had just begun.

Cole had a cleanly shaven face and wore a plaid button-down shirt, while Chelsea sported flaming red locks, a full face of makeup, and a baggy gray sweater.

In the new photo, taken this year, the father of three looked a bit slimmer with a full beard as he smiled for the camera.

The TV star wore a white Budweiser tee-shirt, light-wash jeans, and cowboy boots as he gripped a beer at a sporting event.

Chelsea also looked transformed, pursing her lips and pointing at the camera in a see-through pearl top, dark jeans, and red booties.

The Teen Mom alum showed off her waist-length dark brown hair tied into little ponytails on the side of her head.

The couple shares their son Watson, five, and daughters Layne, three, and Walker, one.

Chelsea also has a daughter Aubree, 12, with her ex Adam Lind.