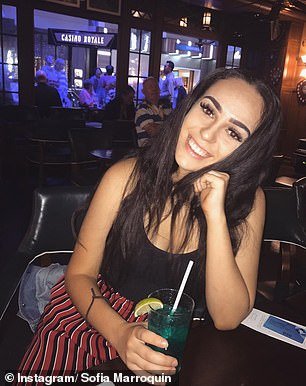 A 19-year-old from Australia has been left with a ‘face like a rectangle’ after undergoing a cosmetic procedure to dissolve fat in her jaw.

Sofia Marroquin shared a video on TikTok of her rectangular face and her family and friends’ reactions when she came home from the treatment, which has since been viewed more than three million times.

‘So just got some lovely needles into my face and my family has no idea what I’ve just done and I’m about to get their reactions,’ Sofia said in the video. 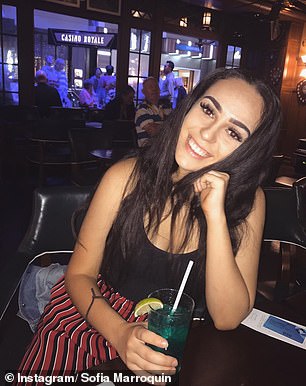 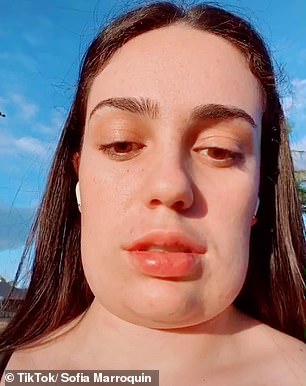 She then proceeded to move through her home, filming her mum and dad’s shocked reactions.

Sofia’s dad audibly gasped when he saw his daughter and said ‘oh my goodness’, while her mother sighed: ‘Oh Sofia’.

The 19-year-old’s sister burst out laughing and fell to the floor, while her best friend covered her mouth as Sofia joked ‘I’m scared’.

Sofia even filmed her local cafe owner’s nonplussed reaction, as she tried to order a coffee. 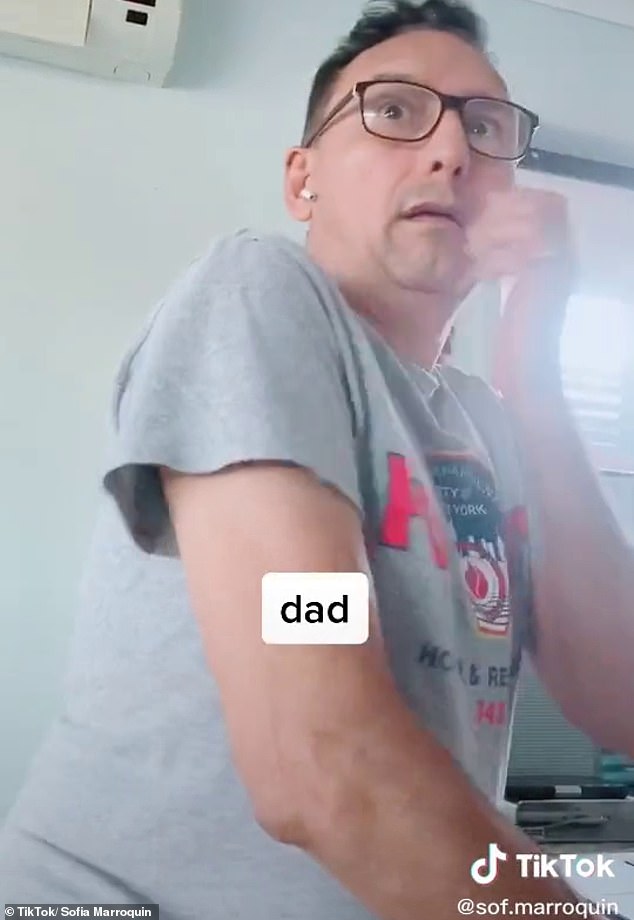 She then proceeded to move through her home, filming her mum and dad’s shocked reactions (Sofia’s dad’s reaction pictured) 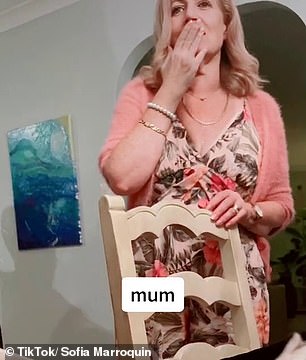 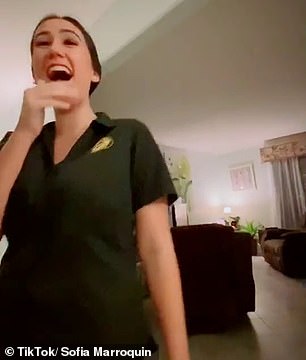 What is the ‘Kybella treatment’?

* Kybella is a nonsurgical injection technique used to reduce excess fat beneath the chin.

* Each treatment takes about 15 to 20 minutes. It uses a synthetic form of deoxycholic acid.

* No incisions are required, and the downtime is minimal in most cases, with some swelling to be expected.

* The best candidate is an adult 18 years or older with moderate to severe fat beneath the chin.

* As a nonsurgical procedure, there is little preparation required for Kybella. It’s advisable to schedule the procedure well before any major events.

* Though Kybella is nonsurgical, some common side effects include pain, swelling, bruising, redness, and numbness.

* The recovery process associated with Kybella is minimal in most cases, and downtime varies from person to person. Minor side effects typically subside in one to two weeks.

In a subsequent video, Sofia explained that her rectangular jawline was caused by temporary swelling following a ‘Kybella treatment’.

In this $500 treatment, injections are used to reduce fat under the chin.

‘Okay, lots of people are confused as to why I made my face look like a rectangle,’ Sofia said.

‘I didn’t purposefully make my face look like a rectangle. I got a treatment done called Kybella, which removes fat from the lower part of your face.

‘Lots of people get it in the lower neck area to remove a double chin, but I got it in my jowls area.’ 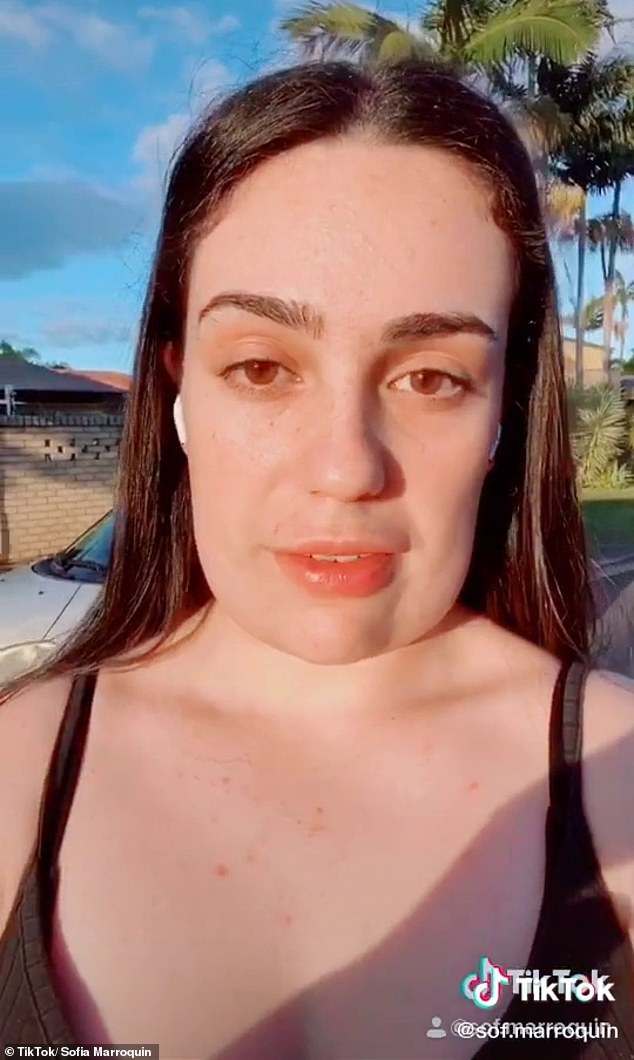 In a subsequent video, Sofia explained that her rectangular jawline was caused by temporary swelling following a ‘Kybella treatment’ (pictured immediately after the treatment)

Sofia said her area was ‘really fatty’ and covering up her jawline, which is why she wanted the treatment done. 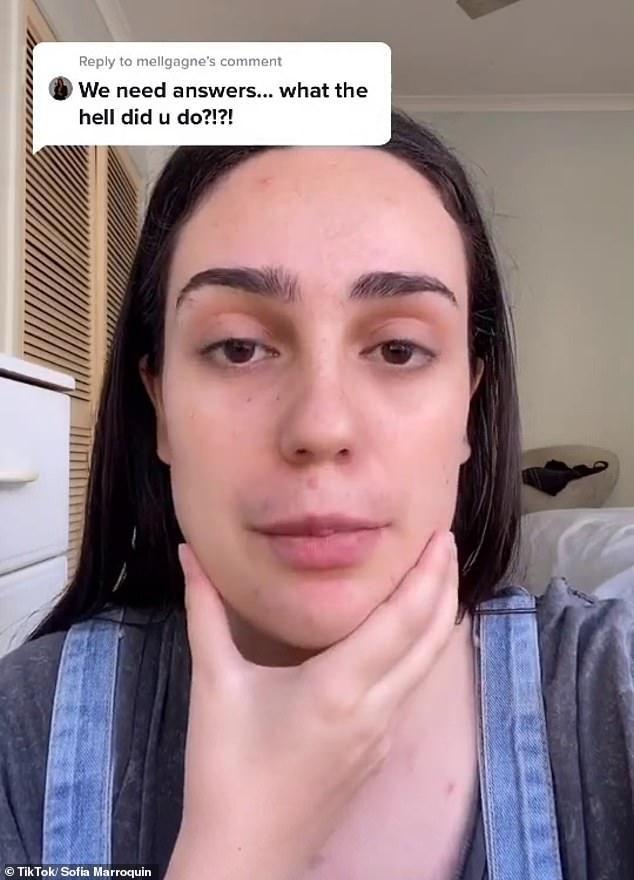 She added in another video that the rectangle face only lasted 48 hours, and when she woke up on the third day, it continued to get better and better (pictured three days later)

She added in another video that the rectangle face only lasted 48 hours:

‘On the third day, when I woke up, it went down and kept getting better and better. Now, after a week, it has basically gone back to normal. There is still a little bit of swelling, but exactly one week until the final results!’ she said.

Since sharing the videos on her TikTok channel, Sofia has gone viral and ended up with close to 28,000 followers.

‘It isn’t a joke anymore but I wish it was,’ Sofia captioned her profile.