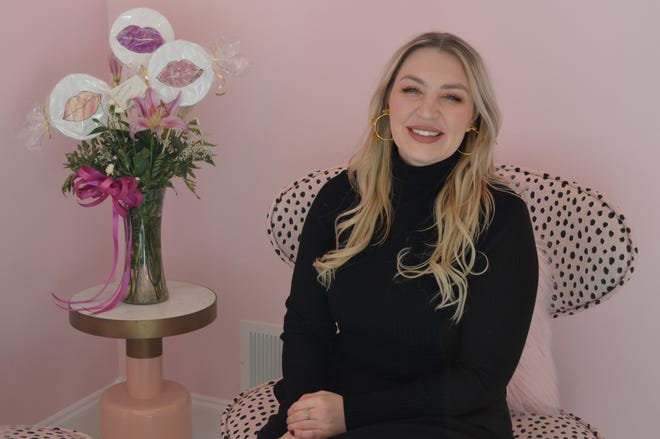 When nurse Katie Sweetman got home from a rough day in the ICU, she googled “happiest nursing jobs.”

One result that popped up was “cosmetic beauty nurse.”

In high school, classmates asked Sweetman to do their makeup for homecoming and prom. In adulthood, coworkers and friends had her do theirs for weddings.

Sweetman, an Oak Creek resident, attended Empire Medical Training in Chicago in 2016. Since then, she’s done about 20 more trainings across the country, including in Beverly Hills.

“I love the power that I have to make someone love themselves a little bit more,” she said. “They deserve to look in the mirror and love what they see.”

“The services we do here are anti-aging and enhancement,” Sweetman said.

Sweetman’s most popular service is lip fillers, with the most minimal treatment being the skinny mini, which is a quarter of a syringe of gel.

“It allows somebody to come in and try something out, but not have crazy swelling or have to commit to something,” Sweetman said.

Besides lips, dermal filler can be used to enhance other areas, like cheeks. Filler services start at $325 and can go into the thousands.

Results last between six months and two years, depending on product and thickness, Sweetman said.

Sweetman performs Botox and Dysport for wrinkles in specific areas of the face, like the forehead, between the eyebrows, and around the eyes.

“It shouldn’t look fake,” Sweetman said. “No one should know anything has been done.”

Botox results show up about two weeks after treatment and last for about three to four months, she said. This service ranges from $100 to $500.

Sweet Tox also offers Kybella, which is a fat-dissolving injection, and Sculptra, which stimulates the body’s own natural collagen production.

Before injecting, Sweetman has an extensive consultation with her clients, where they go over what the client loves and what they want to improve.

“At the end of the day, this is a medical procedure,” Sweetman said. “I know that this is not your average nail or lash appointment. This is a little bit deeper than that.”

Appointments can be booked online at sweettox.co, and a $50 deposit is required.

‘I wanted it to feel empowering’

Sweetman began building her business in 2017 in a 15-by-15 room inside Salon 147 in New Berlin, while continuing to work full time as a nurse in Aurora St. Luke’s Medical Center’s ICU, then at St. Luke’s plastic surgery clinic.

In April 2019, Sweetman was able to quit her day job and take Sweet Tox full time.

“After a month of being full-time in my little space, I was like ‘I want more,’ ” she said.

In June, Sweetman found her own spot, which is right down the street from Salon 147.

She spent seven months renovating the space and giving it a “candy shop glam” look.

Why she went into nursing

After graduating from Oak Creek High School in 2011, Sweetman attended the University of Wisconsin-Milwaukee for her bachelor’s in nursing.

“When someone’s at their lowest and somebody can be there just to make things a little bit better, that’s why I went into nursing,” she said.

She started working as an ICU nurse at St. Luke’s right after graduation in 2015.

“Miracles happen there, but also a lot of sadness happens there,” she said. “I just knew that wasn’t something I wanted to be taking home with me every day.”

Sweetman said cosmetic nursing is exactly what she is supposed to be doing.

HOURS: By appointment only

How to treat, cover, and prevent crow’s feet