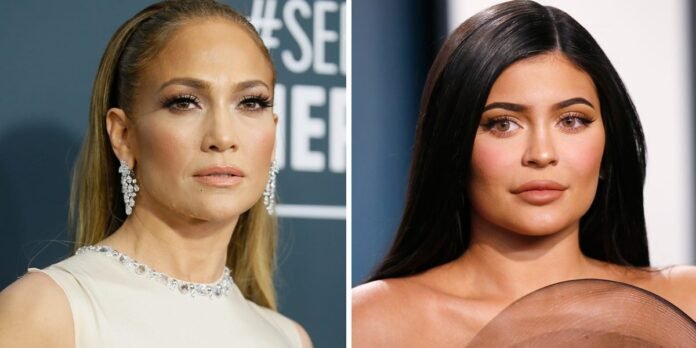 Just about every star in Hollywood had a fragrance tied to their name in the early 2000s, and if not, they likely released an affordable-yet-stylish clothing line at a department store.

More recently, however, stars have followed in the footsteps of Rihanna and her Fenty Beauty empire and attached their names to makeup lines or skin-care brands.

However, celebrities might want to hold off on developing their own face washes, scrubs, and serums. Stars could actually be doing more harm than good with their skin-care lines — especially if they’re promising fans a Hollywood-crafted complexion with their products.

Celebrities are flocking to the skin-care industry

Skin care is now undoubtedly bigger than it’s ever been before thanks to viral internet creators, trends, and the COVID-19 pandemic — so it makes sense as to why Hollywood stars might want a piece of the multi-billion-dollar pie.

Kylie Jenner arguably started the trend when she launched her pink-branded product line as a complementary brand to Kylie Cosmetics in May 2019. Rihanna followed shortly after with Fenty Skin in the summer of 2020.

The success of both lines seemingly inspired Pharrell’s Humanrace brand, Carmen Electra’s GoGo Skincare line, and Jennifer Lopez’s namesake brand, JLo Beauty, all of which were announced in 2020.

And that’s not to mention stars who took the collaboration route. Alicia Keys partnered with Elf Cosmetics to make Keys Soulcare, and Emily Ratajkowski entered a similar partnership with Loops Beauty.

A post shared by Kylie Skin by Kylie Jenner (@kylieskin)

Of course, celebrities weren’t strangers to the skin-care industry before 2019. Cindy Crawford launched a skin-care line all the way back in 2005, and stars including Kendall Jenner, Justin Bieber, and Jessica Simpson have been pushing the Proactiv acne treatment for years.

To promote Kylie Skin in 2019, Jenner said in a video titled “my everyday skin-care routine” that she uses her products exclusively. She also said that using Kylie Skin had become “an everyday thing” for her and that she “can’t live without” the line.

Lopez, on the other hand, has said on numerous occasions that her great skin is partially the result of using products like those from JLo Beauty. She told Elle that sunscreen has been a key to her routine since she was 22 years old, and she told InStyle that sleep, supplements, serum, and “living a healthy, sane life” are equally important.

Some people have recently questioned the musician’s claims, arguing that Lopez has gotten Botox at some point during her career. But in response to those comments, Lopez said she’s “never done Botox or any injectables,” and instead suggested that “being more positive, kind, and uplifting of others” will help “keep you youthful & beautiful too!!”

There’s no doubt that high-quality products can play a role in helping celebrities maintain their glowing skin — but they’re not usually the key to their beauty routines. Instead, it’s often factors like eating healthy food, having access to expensive beauty treatments, and more.

Of course, some celebrities — like Lopez — occasionally mention these components of their routines. But oftentimes, their lifestyle choices are mentioned as afterthoughts, or methods they used before creating their beauty products. And when that happens, shoppers can be left with the wrong ideas about skin care.

Speaking with Insider, cosmetic dermatologist Dr. Azadeh Shirazi argued that the glowing complexions of celebrities are often the result of “a lot of glamour,” but “not a lot of science.”

“It’s like how JLo says that olive oil is responsible for the way she looks,” Shirazi added. “Olive oil is moderately comedogenic, which means it can clog pores, and there are reports of people having severe allergic reactions to it. It does have antioxidants, but it can also be an irritant for some people. There’s absolutely no scientific basis that it has any sort of anti-aging benefits.”

“Analyzing photos of her, she’s seemingly had some help from her dermatologist,” she said of Lopez.

When celebrities leave out key details of their skin-care routines, they impact more than just people’s wallets

Though consumers may have always dreamed of having celebrity-like skin, doing so today is arguably more achievable than in years prior because of how many high-profile stars have launched their own lines.

But as Shirazi notes, celebrities aren’t usually the experts in skin care that they claim to be — so those who solely turn to them for advice or product recommendations might be steered in the wrong directions.

“People are definitely drawn to celebrity skin-care lines because of the stars, but not necessarily the ingredients or science behind them,” she said.

As a result, she’s noticed that many of her clients will attempt to mix their prescription skin-care products with appealing, celebrity-endorsed items.

“I see people coming in, having bad reactions, and saying ‘my skin’s a mess’ because they’ll be using a Retin-A I gave them, and then going out and buying Kylie Skin,” Shirazi said. “People come in with those reactions on a daily basis.”

That being said, even those who aren’t experiencing bad reactions to celebrity skin-care lines should proceed with caution.

Shirazi said that your skin can react differently to ingredients over time and added that the current trend of overbuying products — which can create a skin-care regimen with too many extra and unnecessary steps — could lead to more skin problems down the road.

“We’re putting a lot of things that are unnecessary on our skin, and that’s doing more harm than good in the long term,” Shirazi said. “The more exposure our skin gets to ingredients, it forms a memory. You may not be sensitive to something now when you’re 25 or 30, but in a few years, you’re going to start having reactions and breaking out, and you won’t know why.”

“It’s because our skin wasn’t designed for this,” she continued. “We’ll pick five different skin-care lines, and use one or two products from each based on our perceptions of what we think it’s going to do for us.”

Shirazi says it’s important to remember that everyone’s skin is different, and what works for Jenner or Lopez might not work for you.

“Our skin is unique, so see an expert, find out what type of skin you have, and learn what ingredients work well with your skin type,” she said.

Representatives for Kylie Skin and JLo Beauty did not immediately respond to Insider’s requests for comment.