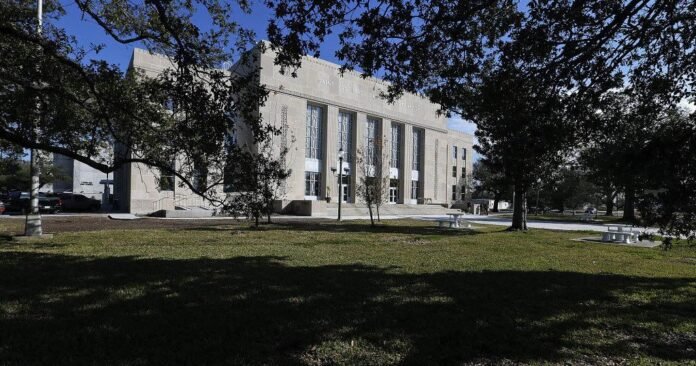 The son of a state judge in St. Bernard Parish was arrested this week for allegedly punching his girlfriend in the eye, leaving a gash that prompted the judge to drive her to his brother’s plastic surgery clinic for stitches.

Eric Bopp Jr., 30, spent two days in the St. Bernard Parish jail, booked on a count of second-degree battery, before his release Friday on $5,000 bond, with conditions that include an ankle monitor and curfew.

His father, Judge Eric Bopp, recused himself from the case on Wednesday, as did the rest of the 34th Judicial District Court bench: Judges Kim Jones, Jeanine Juneau, William McGoey and Darren Roy. It was assigned to an ad hoc jurist, Franz Zibilich, a former Orleans Parish criminal court judge who signed a protective order Friday and ordered it sealed.

District Attorney Perry Nicosia also recused his office from the case, which was referred to Attorney General Jeff Landry’s office. A spokesman did not immediately return a request for comment Friday. Bopp Jr. has not been charged.

The alleged victim reported that he punched her with a closed fist in the right eye early Sunday after a night of drinking, according to St. Bernard Parish Sheriff’s Office reports. She began to bleed, called over neighbors and dialed up Bopp Jr.’s sister to get him.

Instead, Judge Bopp arrived about 8:30 a.m. to pick up his son, then returned with his wife and took the alleged victim “to a plastic surgery clinic in Metairie for medical treatment,” she told deputies, adding that the clinic where she received four stitches belongs to the judge’s brother.

That evening, the woman reported the incident to the Sheriff’s Office, telling a deputy she didn’t want to press charges against Bopp Jr. but that an attorney friend had recommended filing a report to protect herself.

Judge Bopp’s role could make him a key witness in the battery case against his son and might prompt a review by the state Judiciary Commission over “whether the judge, during the course of this incident, did anything that would be a violation of the judicial code of conduct,” said Rafael Goyeneche, president of the Metropolitan Crime Commission. Goyeneche said the Judiciary Commission could review whether Bopp should have reported a possible crime if he suspected one.

The initial incident report doesn’t suggest the judge was “trying to conceal evidence or keep her from going to the police,” said Kim Sport, an attorney and advocate for victims of domestic violence. “It looks like parents being parents.”

Jones, one of Judge Bopp’s colleagues on the St. Bernard bench, signed a warrant on Tuesday for Bopp Jr.’s arrest before she and the other judges recused themselves. Bopp Jr. surrendered Wednesday and was released Friday afternoon, records show. He’s due back in court March 23.

A message to his attorney was not returned Friday. Judge Bopp, 61, could not be reached.

He won a seat on the 34th Judicial District Court bench in November 2020, months after the Louisiana Supreme Court reinstated his law license after suspending him early that year over a pair of drunk-driving arrests. He completed diversion after his most recent DUI arrest, in 2017.

Judge Bopp agreed to a license suspension of a year and a day, with all but 90 days of it deferred. The suspension term required him to apply for reinstatement, which the court granted a few months before he qualified to run for the seat.