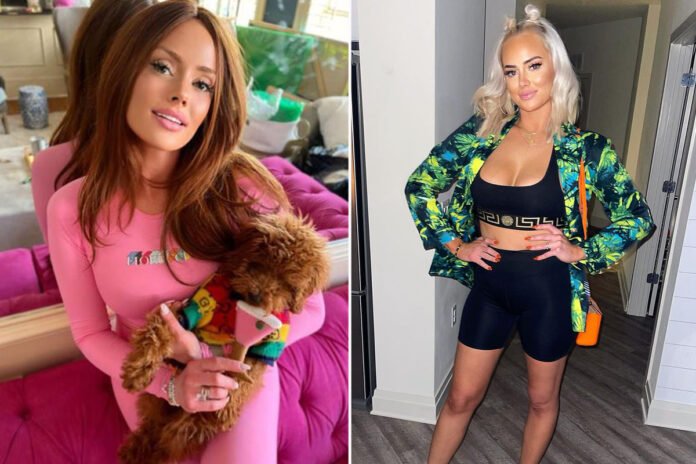 SOUTHERN Charm star Kathryn Dennis is charming her fans with her ever-changing look.

The reality star now boasts red hair after nearly a year spent as a blond.

And fans continue to speculate the 30-year-old has had some more concrete work done to her face and body.

In a new photo shared to Instagram, Kathryn shows off her shiny red locks while dressed in all pink, and holding her dog.

Kathryn, who’s known for her bright red hair, spent most of 2021 as a blond, after lightening her ‘do back in January.

But just a few days before the end of the year, Kathryn swapped her blonde locks back to her signature red hair color.

And fans rolled out the red carpet for her red locks.

One user wrote: “Yasss, the red is back!”

While a second person commented: “The red hair was always YOU.”

Kathryn debuted the freshly colored hairdo on her Instagram Stories first, with a photo of her sitting in a chair in a casual sweat outfit while donning a full face of make-up and her red hair in curls.

A couple other photos showed the star posing again with her friend Jake Horton while attending an event together.

She captured another shot of her from the formal affair wearing a creme-colored mermaid gown while leaning in for a kiss with Taylor Ann Green, her co-star Shep Rose’s longtime girlfriend.

The TV star has underwent many changes in the last year as she lost a custody battle with her ex Thomas Ravanel after he accused her of using drugs and neglecting her kids – allegations which she denied.

Last month, the TV personality broke down in tears and admitted that she was “missing her babies.”

Kathryn also shared a picture of herself crying and ending her message with: “But some days it be like that…”

The model has been open with fans about her nasty custody battle with Thomas, 59.

She shared on Instagram: “There will be a lot more difficult times than good times when you are without your kids.”

Kathryn noted: “It is exhausting to constantly defend yourself from someone who is trying to change reality – it can even make you question what you know happened, or what is true.

“It can be exhausting to live two lives: One for your children and for the world (everything is fine), and the other where you are beaten down by the family court system.

“We see you and we stand with you. You are not alone.”

The Sun previously revealed Kathryn temporarily lost custody of her two children, as she now has supervised visitation every other weekend.

A source told The Sun: “She has supervised visitation during the day Saturday and Sunday every other weekend.”

The star is also mourning her break-up from boyfriend Chleb Ravenell whom she recently called it quits with.

Kathryn and Chleb went Instagram official with their relationship in October 2020 and took things a step further when they moved in together this past April.

The mother of two reportedly wanted to “get married again and have more kids,” but Chleb refused to make that commitment, leading to them parting ways.