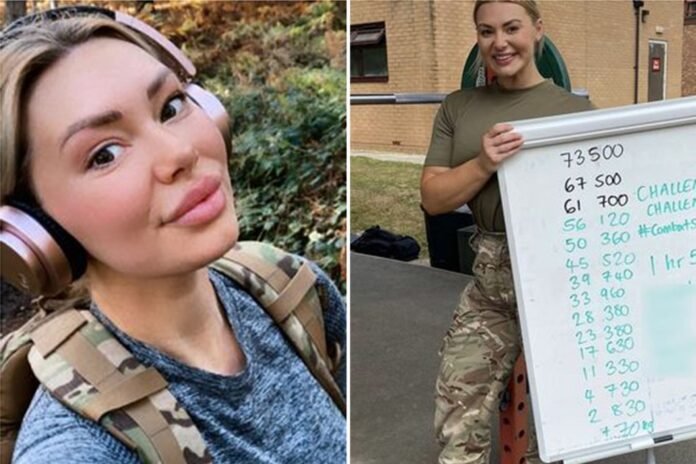 This British beauty queen-cum-soldier is giving her critics some lip.

Georgie Goodey, 27, is blasting back at trolls who say her lip fillers are a national security threat that make her easily identifiable to her enemies.

The British Army soldier told South West News Service that she’s bombarded with nasty comments about her appearance online — despite the fact she has signed up to serve her country.

“I had some really quite awful comments about the fact I’d ruined my face, that my dog is more attractive than me and that I shouldn’t be in the military because of the work I’d had done,” Goodey claimed.

Shockingly, one nasty troll even publicly revealed the military unit Goodey was working in — potentially posing a threat to her personal safety.

However, despite the backlash, Goodey said she has no plans to leave the military, and says her cosmetically enhanced appearance has no impact on her abilities as a soldier.

In addition to serving her country, the multitalented servicewoman also competes in pageants on the side.

She won the Miss Essex title in 2019 and is hoping to win the Miss Great Britain pageant later this year.

But the cruel trolls have also come after Goodey for her pageant prowess, saying she shouldn’t be allowed to compete because she’s not au naturel.

“My eyebrows are semi-permanently tattooed on, and I’ve had Botox and lip fillers,” Goodey admitted. “I suppose I’ve had quite a lot of that over the last few years.

“I probably have my lips done every six months and the same with the Botox, but I think that’s quite common now because it’s so accessible,” she added. “I think what’s frustrating about the comments is I’m a huge believer in women having the choice and not criticizing each other for making that choice.”

The bombshell said her cosmetic procedures are not cheating, and are no different from other competitors tweaking their bodies through gym classes and healthy-eating plans.

“Personally, I don’t see me having lip fillers and Botox any differently than me going to the gym and getting the body I want,” Goodey said. “If you can do something to change anything about yourself that you are maybe unhappy with, you should be able to do that free from judgment.”

The soldier said it is hard not to take the online attacks personally, but has vowed not to let them stop her from fulfilling her dreams — both on the battlefield and on the runway.

“I do get insecure, and I do worry that I could be thinner, or prettier, but I think that’s really normal,” she stated. “It’s recognizing that it’s OK to feel like that and it doesn’t take away from your worth as a human being.”