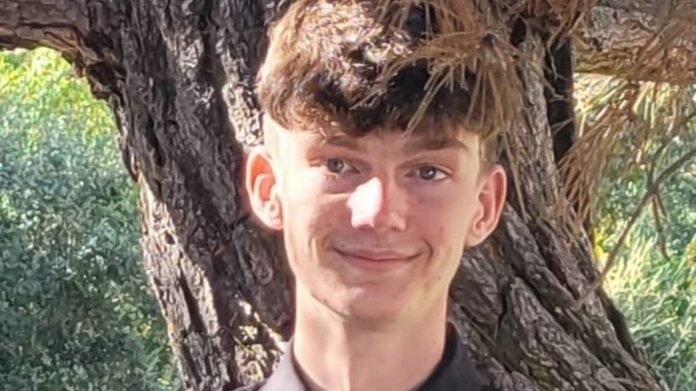 Less than a month ago, Zach Rowland was living life like a typical Atascadero teenager stuck in a global pandemic, exploring nature, skateboarding with friends and dabbling in photography.

He liked to visit the Sunken Gardens and other sites around town to capture photographs using his iPhone and upload them to his Instagram @photography_by_zach_51.

Then, in February, his household came down with breakthrough cases of COVID-19, leaving Zach, his 12-year-old brother, Matthew Noday, and mother, Carrie Callahan, laid up with the virus.

Curiously, at the same time, Zach started complaining about searing pain on his right side, his mother said.

She watched with concern as her 17-year-old son’s skin became red, swollen and inflamed.

“The pain had gotten so bad he could barely sit up on the couch, and I ended up calling for an ambulance because I didn’t want to move him,” Callahan said.

“We were both scared,” Carrie Callahan said after hearing the diagnosis.

That’s because the frightening condition is extremely rare and life-threatening. It requires intensive antibiotic treatment and multiple surgeries, according to Dr. Babak Sarani, director of Trauma and Acute Care Surgery at George Washington University Hospital in Washington, D.C.

“It’s a nasty, nasty disease,” Sarani told The Tribune. “It can easily kill you if a surgeon doesn’t get to it quickly enough and you don’t get appropriate antibiotics.”

Because of that risk, Zach needed immediate emergency surgery and a higher level of care than Sierra Vista Regional Medical Center could provide.

So on Feb. 14, he was taken by ambulance to the airport and sent to Valley Children’s Hospital in Madera by medevac, where he has been living for the past three weeks, Callahan said.

Since then, Zach’s already undergone several surgeries as doctors work to fight the infection and repair the damage. They are making progress, but he’s got a long way to go before he’s fully healed.

For Atascadero teen, 10 surgeries down with more to go

When he arrived at Valley Children’s Hospital, Zach was rushed immediately into surgery.

Since being admitted, he has been given infusions of powerful antibiotics and has had at least 10 surgeries, his family said.

Sarani said surgeons need to go in to remove the dead, damaged or infected tissue in a sequence of procedures. Because the infection spreads rapidly, the doctors will allow recovery time after surgery, reassess the wound and perform another surgery after anywhere from 12 to 36 hours.

The surgeon cannot close the wound until the infection and dead tissue is completely removed, Sarani said.

Although the idea of 10 surgeries in a three-week period is staggering, it is an indication that the teen’s doctors are treating the dangerous infection seriously, Sarani said.

“That tells me that the surgeon is very aggressive and he or she is going to get ahead of the infection, which is going to be the key to Zach’s survival,” he said.

Zach is lucky that the infection did not spread to his bones or vital organs, which can happen in necrotizing fasciitis patients, his grandmother said.

After the surgeries to control the spread of the infection and multiple daily infusions of antibiotics, the teen has moved into the third phase of his recovery — closing the wound, with the help of Valley Children’s Hospital plastic surgeons.

It is an arduous, deliberate process that will also require multiple surgeries and intense care to avoid further infection.

In short, Zach still has a long road ahead of him.

“It’s a marathon, not a sprint,” Sarani said. “He’s got to kind of just pace it out over time and just realize that this is going to end, but it’s going to take months and months.”

Flesh-eating bacteria is uncommon and not contagious

Necrotizing fasciitis is so rare the typical doctor may only see two cases throughout their career, Sarani said in a write-up for the National Organization of Rare Disorders.

As a result, the condition is frequently missed or misdiagnosed. When that happens, the error that can be fatal, according to the Centers for Disease Control and Prevention (CDC).

The condition gets its common name — flesh-eating bacteria — because the invading bacteria kill the body’s tissue, according to the CDC.

How Zach contracted the bacteria remains a medical mystery, his family said.

While he was COVID-positive when he first noticed symptoms of the infection, that doesn’t mean the two conditions are related, Sarani said, adding there is no evidence that necrotizing fasciitis is associated with COVID-19. It’s possible, he said, that the coronavirus infection suppressed Zach’s immune system, making him more susceptible to the bacterial infection after exposure.

Differentiating necrotizing fasciitis from another type of infection is tricky, and typically, the odds are that the redness and inflammation that comes from an infection is the result of another, less lethal type of bacteria, Sarani said.

One clue the infection was serious: Necrotizing fasciitis is completely debilitating.

The ratio of inflammation to pain is another indicator of flesh-eating bacteria.

“What separates necrotizing fasciitis from other infections is this creeping infection under the skin,” he said. “Even the areas that are not red all of a sudden will start hurting.”

Despite the frightening description, “flesh-eating bacteria” is not contagious nor was there any way to prevent it from happening, Sarani said.

“This is not something he did. This is not self-imposed,” the doctor said. “This is truly … a very rare occurrence in a otherwise normal 17-year-old guy,” Sarani said. “It’d be like blaming someone for getting cancer. That’s not their fault.”

How SLO County residents can help Zach as he recovers

Throughout the entirety of this ordeal, Zach has been polite, gracious and caring, his family said.

Zach’s mother, Carrie Callahan, and his grandmother, Ruth Callahan, have been staying in an RV parked on the Valley Children’s Hospital grounds since the teen was transferred there.

For the first five days of his hospitalization, Carrie and Ruth had to quarantine in the RV because of their exposure to Zach, who was still COVID-19-positive at the time, the family said.

The mother and grandmother have been rotating between staying near Zach’s bedside and going home for a day or two to recuperate, his grandmother said.

“It’s just better for him to have one of us there as much as possible,” Ruth Callahan said.

Once the plastic surgery is complete, Zach will be discharged from the hospital and sent home with wound care instructions and the understanding that the recovery process for necrotizing fasciitis can take months.

“He has to be really, really patient because it will take a long time to heal,” Sarani said. “But it will heal. “

Sarani said its important that Zach and his family try get back to normal life, maintain a healthy, nutritious diet and connect with friends and family.

Throughout this ordeal, Zach has been his compassionate self, his mother said.

He is concerned about the well-being of his family and overwhelmed by the support he has received from his extended family, Atascadero High School teachers and the wider community, Carrie Callahan said.

“His biggest worry was me and all the hospital bills that are going to come up,” she said while trying to hold back tears. “I told him that is nothing he needs to worry about while you’re getting better.”

Regardless, he still worries, because Callahan is a single parent and health crises are expensive, his grandmother said.

Zach’s uncle, Andrew Callahan, set up a GoFundMe page for community members who want to lend their support to the Atascadero teen’s recovery.

Proceeds from the GoFundMe campaign will go toward supporting Zach and his family.

The family has raised about $9,660 of a $20,000 fundraising goal as of Wednesday, according to the GoFundMe page.