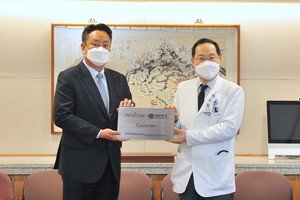 Severance Hospital said Tuesday that it has been designated as the Intuitive Epicenter to provide training for single-port (SP) robotic surgeries to healthcare providers.

At Severance Hospitals’ thyroid and endocrine surgery clinic, designated as the Intuitive Epicenter, all surgical methods are being performed with SP robotic system.

Severance introduced Intuitive Surgical’s SP system following the U.S. in 2018 to perform surgery and brought in an additional model a year later. In 2020, the hospital became the first medical institution to operate 1,000 surgeries with the system.

At Severance, surgical procedures using the SP robotic system are controlled by surgeons. The medical robot uses three surgical instruments and a camera to help surgeons operate the surgery.

Severance Hospital plans to expand the use of SP robotic surgery in other departments, including otolaryngology, obstetrics and gynecology, urology, hepatobiliary and pancreatic surgery, breast surgery, and plastic surgery, Kim added.