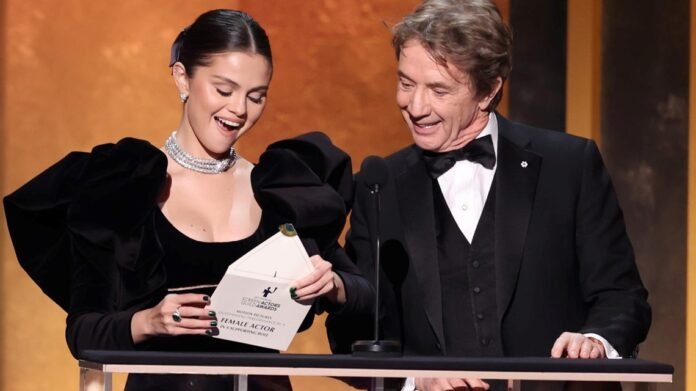 Selena Gomez hit the red carpet at the 2022 SAG Awards in a stunning black dress that was anything but ordinary.

The long, black velvet Oscar de la Renta gown featured a tiny cut-out at the bust and large, puffed-sleeve shoulders. Gomez let the dress do the talking, opting for a sleeked back bun which she adorned with a black bow, and a sparking choker necklace with glittering earrings to match. The 29-year-old singer also wore black pointed-toe paten pumps by Christian Louboutin, that just barely peeked through the floor-length gown.

Gomez ditched the heels when she was up to present at the 28th annual awards show. Joined by her Only Murders in the Building co-star, Martin Short, Gomez stepped onto the stage barefoot, with the funny man by her side, and it didn’t take long before the 71-year-old actor began busting out the jokes. At one point, Short joked that he couldn’t show too much expression because “the Botox is still fresh,” to which Gomez playfully responded, “me too.”

In addition to presenting, Gomez was nominated for her first-ever SAG Award at this year’s ceremony. She and co-stars Short, Steve Martin and more earned a nod for Outstanding Performance by an Ensemble in a Comedy Series for the Hulu mystery-comedy series.

“I cried like a little baby. I was very excited,” she told ET while promoting her latest film project, Hotel Transylvania: Transformania. “I worked really hard on that project, so it was a lovely surprise. I’m very excited!”

See more from Gomez in the video below.

Selena Gomez Says She ‘Cried Like a Baby’ After GRAMMY Nomination