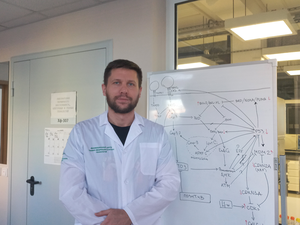 Scientists have discovered that the Klotho gene is able to suppress the growth of glioblastoma cells, a malignant tumor of the brain and spinal cord. The experiments have shown that Klotho gene could be developed new methods of diagnosing and treating glioblastoma. An article describing the studies and their results was published in the Journal of Molecular Neuroscience.

Klotho gene, identified as an anti-aging gene, can manufacture two protein products: transmembrane and secreted forms. The transmembrane form of the protein is embedded in the membrane of the individual cell and affects it directly. The secreted form is released by the cell into the intercellular space, enters the bloodstream and spreads throughout the body, affecting many, including distant cells.

“World science already had evidence that the Klotho gene can suppress glioblastoma cell viability”, said Vsevolod Melekhin, head of the research group, associate professor at the Ural Federal University, an employee of the Ural State Medical University and the Institute of Medical Cell Technology. “The uniqueness of our studies is that they were conducted specifically on the secreted form of the Klotho protein. This methodological nuance allows us to take a slightly broader look at the mechanisms of tumor disease development.”

In experiments scientists used the Klotho gene built into a plasmid, a closed-ring DNA molecule taken from bacteria. Along with it, the gene was implanted into glioblastoma cells. The plasmid cannot enter the cell on its own, for which the researchers used a complex of positively charged DNA-lipids: they are readily attracted to the negatively charged cell surface, fuse with the cell membrane, which also consists mainly of lipids, and pass through it into the cell.

“It is easier to deliver a gene with viral constructs, which easily penetrate the cell. But viruses have the ability to embed themselves in the genome, the totality of the cell’s hereditary material. And the use of technologies that involve tampering with the genome is restricted by law and ethical standards. The plasmid only works inside the cell for two to three weeks, and then it is destroyed, leaving no trace in the cell’s genome,” explains Vsevolod Melekhin.

Placed inside glioblastoma cells and in a state of hyperactivity, the Klotho gene produced a secreted protein of the same name, which entered the intercellular space. After conducting three tests, scientists recorded that after 72 hours the protein production increased almost 15-fold, the viability of glioblastoma cells dropped by 8%, the number of cells decreased by almost 20% of the control values.

“The body gets rid of unwanted or damaged, mutated cells with the help of apoptosis, a mechanism that triggers the program of self-destruction, “suicide” of cells. In malignant tumor cells, the apoptosis mechanism is blocked, so they multiply constantly and uncontrollably. However, as a result of our experiment, we registered a significant increase in the number of apoptotic cells,” Melekhin adds.

According to the scientist, the research conducted on the secreted form of the Klotho protein is another step toward creating more effective treatment and diagnostic approaches.

The Klotho gene was discovered in 1997. It has been scientifically established that this gene influences the processes of aging: the less active the gene is, the more distinct the signs of premature aging are, and vice versa, the higher the gene expression is, the longer the organism’s lifespan is. Links have been traced between the behavior of the Klotho gene and such diseases as hypertension, diabetes mellitus, pulmonary emphysema, and other pathological age-related changes. In the mid-2000s, studies began on the effect of the Klotho gene on the development of cancer – lung, breast and liver cancer. However, there is still insufficient information about the mechanisms of the anti-tumor effects of the Klotho gene activity.

Disclaimer: AAAS and EurekAlert! are not responsible for the accuracy of news releases posted to EurekAlert! by contributing institutions or for the use of any information through the EurekAlert system.