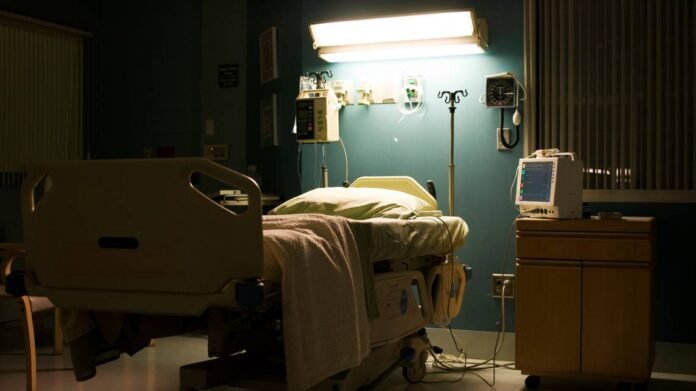 The first accusation against registered nurse Gregory Allen Harms came in the spring of 2011, after a woman went into a Carmichael medical office early on the morning of March 31 for cosmetic surgery.

She was introduced to Harms and told he would be her recovery nurse; he gave her some pills and an intravenous medication that put her to sleep.

The woman woke up briefly after hearing the voice of a female nurse and her doctor, then fell asleep again.

“She said she woke up again and felt what she described as a finger in her vagina,” Folsom police Detective Melanie Catanio testified in January in Sacramento Superior Court, nearly a decade after the alleged incident.

The woman, Y. Doe, reported the incident to the Sacramento County Sheriff’s Office at the time, but Dr. Andrew Pichler’s office said its own review had turned up no evidence of wrongdoing by Harms, and the woman told an investigator “that she was not interested in pursuing a criminal investigation,” court records say.

Over the next eight years, Harms, 62, would continue in his profession and face accusations of assaulting two other helpless patients at two other hospitals — Methodist Hospital of Sacramento in 2016 and Vibra Hospital in Folsom in 2019 — and of having child pornography on his cellphone.

He has denied the accusations, and his attorney says the victims’ claims are the result of them being incapacitated by medications and injuries.

“He didn’t do it,” Gold River attorney Michael Chastaine said. “The unfortunate reality is that these women underwent some very serious injuries and they were on some pretty heavy duty medications.

Chastaine noted that one of the women initially identified another man as her attacker, and that hospital investigations into the claims turned up no evidence.

He declined to make Harms, whose license to serve as a nurse has been suspended, available for an interview.

“No matter how this turns out, he’s not going to be allowed to continue with a nursing career, which is unfortunate, but that’s the reality of it. While we haven’t had our hearing in front of the nursing board, I’d have to say it’s a foregone conclusion that they’re not going to allow him to reinstate his license, so he’s going to have to find a new occupation.”

But Harms’ troubles go far beyond his professional future.

He faces trial in July on six felony counts alleging he assaulted the three women while they were in his care, as well as two lawsuits filed on behalf of two of those women, who say they were assaulted in their hospital beds in December 2016 and January 2019 because of negligence by the hospitals that hired Harms.

“It’s horrifying, just absolutely terrifying,” said John Taylor, a Manhattan Beach attorney suing Harms and Methodist Hospital on behalf of a woman who says she was raped three of the four nights she was in intensive care — attacks that occurred while she was conscious but immobile — in December 2016.

“She was completely alert and aware, and just unable to physically resist him and couldn’t talk,” Taylor said.

After being moved out of intensive care in January 2017 and regaining a partial ability to speak, she reported the assaults to her speech therapist, who told hospital officials, the lawsuit says.

Instead, the lawsuit says, Methodist Hospital “performed no investigation” and told the woman she “was imagining and/or hallucinating the assaults.”

“So you’ve got a predator who’s taking the most vulnerable people, both in terms of their ability to defend themselves at the time that he’s attacking them, and then who had the built-in defense of when the victim finally says something it’s, ‘You’re imagining this, it’s part of the medication,’” Taylor said.

Dignity Health, which operates Methodist Hospital, said it notified authorities of the allegations at the time.

“Dignity Health’s top priority is the care and safety of our patients, and we take these allegations very seriously,” the company said in a statement. “After learning of the accusations, Methodist Hospital of Sacramento immediately reported the complaint to the California Department of Public Health and the Sacramento Police Department, and also conducted an internal investigation.

“Any claim that Methodist Hospital dissuaded the patient from coming forward is simply not true, and inconsistent with the mission and values of our organization.

“We understand a lawsuit has been filed in this case, so cannot comment further.”

Vibra, which faces a separate lawsuit from the January 2019 case, did not respond to a request for comment.

Pichler’s office, where the 2011 incident allegedly occurred, did not respond to a message; the outgoing message at the office said the medical practice had been closed “due to circumstances beyond our control.”

Patients made repeated reports to authorities

The story of how Harms eventually came to face charges stems in part from the alleged victims refusing to go away after making their initial reports, and from publicity surrounding the last alleged assault.

Law enforcement and state licensing officials had been aware of accusations against Harms since 2011, court records say, but he had continued on in his profession until January 2019, when police were called to Vibra Hospital in Folsom.

There, police found a patient partially immobilized by organ failure who wanted to report a sexual assault.

“She was in a hospital bed,” Folsom police Detective Michelle Beattie testified in a Sacramento Superior Court hearing last month. “She had limited mobility, and she was unable to speak due to a respiratory device that was attached to her to help her breathe.”

The woman had enough mobility that she could write, and offer hand gestures such as a thumbs up or down to questions, Beattie said.

“I asked her if she could tell me what happened, and she wrote down on a piece of paper, ‘I was tied to the bed and fingered, plus he tried to f— me,’” Beattie testified.

At the time, Folsom police interviewing Harms at Vibra Hospital asked for permission to search his phone.

“He did not consent to us searching his cellphone,” Catanio testified. “I told him I was going to take his cellphone and write a search warrant seeking permission to search his phone.”

Catanio testified that she took the phone back to police headquarters, plugged it in and placed it in airplane mode, then obtained a search warrant that allowed police to download the contents of the phone.

Catanio then obtained a search warrant for Harms’ home, and seized a desktop computer and iPhone, court records say.

A search of the computer turned up searches for “teens” and “voyeurism,” as well as 245 photos, Folsom police Detective Donald Rowberry testified during Harms’ preliminary hearing.

“All except for about 10 of the photographs were of young teens, what I would consider nudism, where just they are outside, just, they are not engaged in a sexual act at the time,” Rowberry testified. “Approximately 10 of the images that I located is what I would say to be child pornography.”

On the iPhone, Rowberry said, “there were searches for an attorney.”

The evidence from Harms’ cellphone led prosecutors to file a seventh count of possession of child pornography, but Chastaine and co-counsel Jessica Davis challenged the police seizure of the phone, and Judge Steve White ruled Jan. 28 that the seizure “was not justified” and that the evidence gleaned from it cannot be used.

Chastaine says that seventh count will be tossed, although it remains on the court’s online case docket.

Harms was not initially charged until Nov. 8, 2019, when three counts stemming from the Folsom case were filed. Folsom police posted news of the arrest on Facebook on Nov. 11, and within days a second woman had come forward.

That woman was R. Doe, the patient from Methodist Hospital who contacted Sacramento County District Attorney Anne Marie Schubert’s office after her uncle saw news of Harms’ arrest on television.

At the D.A.’s office, she told investigators her story of being assaulted while she was incapacitated and in the intensive care unit at Methodist.

This was the third time the woman had talked to law enforcement about her allegations.

The first was at the hospital, where her lawsuit says Methodist “administrators shared plaintiff’s private medical history with law enforcement and informed law enforcement about the hospital’s ‘findings’ — that plaintiff had imagined and hallucinated the assaults due to her pre-existing and current medical conditions.”

“Due to defendant Methodist Hospital’s actions, no in-depth law enforcement investigation was performed and plaintiff and her family were told, unequivocally, that the assaults did not occur,” her lawsuit says.

She was discharged from the hospital Feb. 6, 2017, and began a long recovery process. By December 2017, she was ready to go back to the police.

“In mid-December 2017, plaintiff provided a packet of information to the front desk at the Sacramento Police Department, including her medical records from Methodist Hospital and the name of the perpetrator — Gregory Allen Harms,” the lawsuit says. “Plaintiff’s allegations received no new attention, and she was told by law enforcement that the matter had ‘been closed.’”

With her father and other family members now convinced “that the assaults were imagined,” the woman tried to move on with her life, her lawsuit says.

That changed after Harms was arrested in the Folsom case and Sacramento police told her that there may have been a victim before her.

Nothing had come from that first case, the plastic surgery incident in Carmichael in 2011.

But during the visit to Vibra by Folsom police in January 2019, a supervisor there told Catonia that there had been an earlier accusation against Harms.

The supervisor said an investigator with the state Department of Consumer Affairs, which oversees the Board of Registered Nursing, “informed her that there had been a prior allegation of sexual assault by Mr. Harms to (Y. Doe) back in 2011,” Catonia said during the January hearing.

That led her back to Y. Doe for another interview and, ultimately, one of the felony counts Harms now faces.

Nurse released on $1 million bail after year in jail

Harms had been held without bail at the Sacramento County Main Jail since his November 2019 arrest. But in January his lawyers asked Judge White to set bail at $500,000, while the prosecution argued for $2 million bail on the grounds that Harms is a danger to the community and, facing 50 years to life if convicted, a flight risk.

Chastaine argued that Harms is married and has family ties to the community, and that he has no previous criminal record.

The case “involved working in a nursing profession,” Chastaine argued. “It’s not kidnapping women off the street and anesthetizing them and molesting them.

“It is in a very specialized setting, one to which Mr. Harms no longer has access to.”

The judge split the difference, setting bail at $1 million, and Harms won his release.

That is of little comfort to the Methodist Hospital patient, who Taylor says is “frightened and scared” and still can barely face going in for medical treatment.

“Anytime that she goes back to deal with medical staff, whether its office visits or tests that require her to go back into a hospital, she’s terrified,” Taylor said.

Sam Stanton has worked for The Bee since 1991 and has covered a variety of issues, including politics, criminal justice and breaking news.