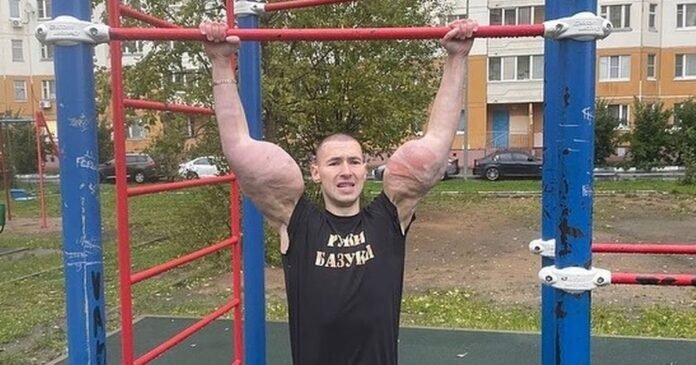 A man with huge biceps has flaunted his latest plastic surgery – and fans aren’t keen.

Kirill Tereshin first hit headlines in 2017 after injecting his arms with synthol oil in a bid to increase their size.

He managed increasing them to a massive 26cm (10 inches) in just 10 days after completing the life-threatening practice.

Now it seems as though the former Russian soldier has come under fire again for his procedures.

The social media clip shows the 25-year-old lad flaunting all angles of his face before blowing a kiss with his pouted lips.

While his huge biceps appear in the clip, the main focus was on his face procedures.

One Instagram user slammed: “What a pity for his mother,” while another added: “Send him to fight in Ukraine.”

And a fifth social media user commented: “Your parents must be proud.”

He decided to get further treatment after he was told he’d die when he underwent surgery to get fake “superman” muscles.

Kirill was urged to get the lumps of hardened petroleum jelly and dead muscle removed from his biceps, but he refused.

After having the tricep surgery, he “very afraid” about going under the knife to remove the hardened jelly from his biceps.

His latest venture to alter his appearance is more extra-terrestrial with his enlarged lips and cheekbone fillers.

Want all the biggest Lifestyle news straight to your inbox? Sign up for our free Daily Star Hot Topics newsletter

It comes as the social media sensation sparks grave fears with defiance.

Aside from the unusual look, the synthol in his arms can damage muscle tissue and endanger cardiovascular health.

And that’s why his TikTok followers expressed their concern for his life.

In a recent video, one person commented: “Popeye the sailor man… On a serious note they really are gonna pop.”

How Is Social Media Morphing Our Self-Image?