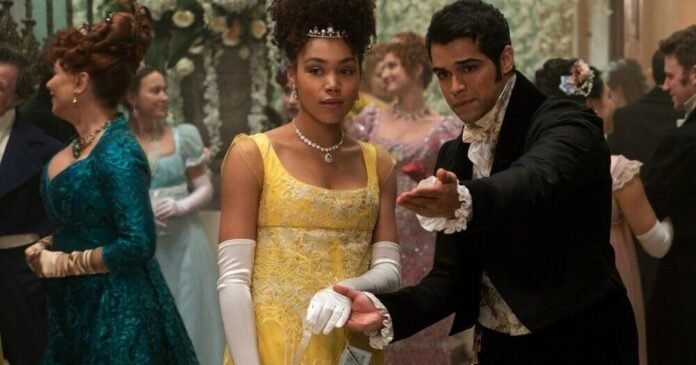 ‘Bridgerton’ star Ruby Barker had to “line [her] armpits with sanitary towels” to stop sweat seeping through her costumes.

The 24-year-old actress – who plays Marina Thompson in the hit Netflix series – suffers from a condition called hyperhidrosis, which means she perspires more than the average person, and she had to use the period products to avoid damaging the garments.

Ruby explained how she would sweat more profusely when she got “nervous” on set.

She said: “They are made to measure so there is an element of comfort, but I would say the biggest problem for me was how hot it was that summer. It was absolutely roasting and obviously I had these normal anxieties [about filming], and when I get anxious I sweat. That is completely natural of course, but what makes it worse is realising that actually this isn’t like a normal amount of sweating.

“I have something called hyperhidrosis, so I would then get anxious about that and I’d sweat more. I actually started to sweat through the ‘Bridgerton’ costume so for the whole show I had to line my armpits with sanitary towels so I wouldn’t destroy the costumes. That’s how bad it was.”

Ruby has suffered from the condition since she was school age and has tried having Botox injections in her armpits to stop it, but admitted it is too “expensive” to have regularly.

She added to Britain’s OK! magazine: “I did try Botox in my armpits. I had a really important business meeting at a nice restaurant once, and when I popped to the bathroom I looked in the mirror and there were sweat patches literally down to my hips. That’s when I thought, ‘I need to do something about this,’ so I went to Harley Street and got my armpits done. Yes it does work but I haven’t had it topped up because it’s just so expensive.”

This article originally ran on celebretainment.com.

Get local news delivered to your inbox!