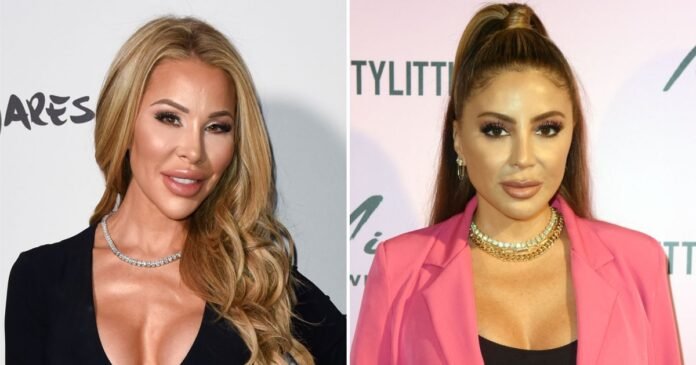 Larsa’s story to tell! After Larsa Pippen shut down rumors that she had a Brazilian butt lift, her Real Housewives of Miami costar Lisa Hochstein is coming to her defense.

“I mean, that’s her story to tell,” Lisa, 39, exclusively revealed on the Wednesday, March 16, episode Us Weekly’s “Getting Real with the Housewives” podcast. “It’s a personal thing. No one needs to tell you what they’ve gotten done. This whole thing about, well she’s on TV or you should be owning up to what you did, not really, it’s not it’s for her to tell or not to tell.”

During the Real Housewives of Miami reunion, host Andy Cohen explained that there’s been “quite a few comments” from the cast about Larsa’s changing appearance. The reality star, 47, admitted that she has had her nose, lips and breasts done, but  she works out “seven days a week” to get her curves.

During the reunion, Larsa took issue with the Hochstein Med Spa owner for not speaking up when her fellow Bravo stars criticized her appearance.

“I feel like the way she approached me, almost like demanding and aggressive that I have her back. I’m gonna have your back because if I don’t like something that someone’s saying, or if I strongly disagree, I’m gonna say, ‘Hey, that’s not cool, maybe you shouldn’t go there’ and I definitely did,” Lisa explained to Us. “But these women are all my friends, so I’m not gonna jump across the room and like strangle her or start yelling at her at the top of my lungs, especially when she’s doing a great job defending herself.”

Lisa felt that it wasn’t her place to interject since Larsa was “doing a good job” defending herself against Adriana de Moura.

“I think that we all kind of chimed in and rolled her eyes. Like ‘What the hell are you saying?’” Lisa told Us. “There’s certain things that Adriana said that I didn’t agree with, and I think all of us vocalized it as well as we could.”

The Real Housewives of Miami is streaming on Peacock will premiere on Bravo Tuesday, April 5, at 9 p.m. ET.