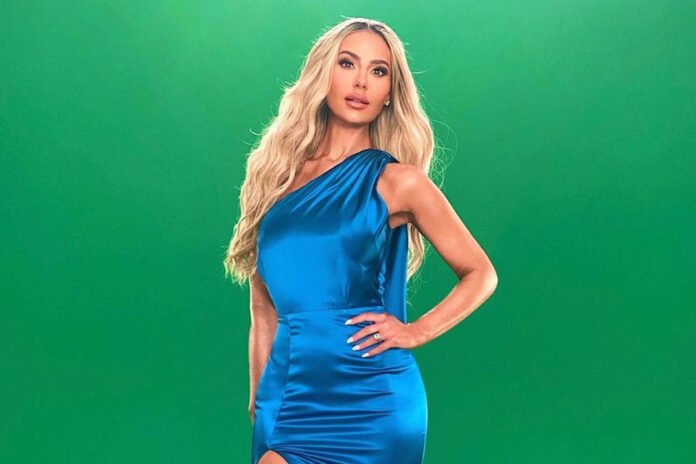 FANS believe Dorit Kemsley to be “unrecognizable” in new glam photos, though she previously denied having facial plastic surgery.

The Real Housewives of Beverly Hills star has been compared to Kim Kardashian in her newest photo set.

Dorit, 44, promoted her formal gown design on her Instagram profile yesterday, as fans were shocked over her appearance.

The reality star shared a series of videos dressed in a form-fitting deep-blue dress, with one strap and slit up the leg.

The mother of two wore her hair wavy and long, and sported tall black heels to compliment the outfit.

While posing in front of a green screen, Dorit modeled her gown as a part of her new bridal collection with Nektaria.

The TV personality captioned her posts: “Can you guess my tag line? Drop your best guess 👇🏼😉💋💎,” and “can’t talk right now ☎️💎 #RHOBH #Dorit&Nektaria,” as she showed off her flawless figure and makeup.

Fans were floored by the share, as they rushed to the comments to suggest the designer had more surgery than she previously admitted.

“Is it just me, or does she look really different?! Plastic surgery? Too much botox!?” one asked.

“Some people call me two-faced. But I’m actually on my 10th,” another slammed.

Many others have previously criticized the Bravo star for attempting to look like Kim Kardashian and found her makeup contouring and skin tanning regimens to mirror the socialite.

This new post was no different, as another fan wrote: “I thought this was Kim K in her blonde days at first.”

The blonde took to Instagram to open up honestly about her past procedures, and explain that her “transformations” are really just the result of professional makeup artists.

“Ask me anything you like!” the reality star posted on her stories, while one follower quickly questioned: “Have you ever done plastic surgery?”

“The only plastic surgery I’ve had done is my boobs,” she admitted, though clearly irked by the topic.

“It drives me crazy when people say I’ve had plastic surgery on my face. I’ve done filler and Botox and I work with masterful makeup artists who can transform your face,” the star revealed.

“If I ever decide to do plastic surgery, I promise I will happily share it.”

During the season nine reunion of RHOBH last year, Dorit explained her history of cosmetic adjustments even further.

“I’m very happy to say what I’ve had done. Because I think it’s comical when people say that I’ve had a facelift and a bunch of surgeries.”

“A little botox and filler…that’s all I’ve ever done to my face,” she pressed.

Despite not getting hot and heavy into plastic surgery, the fashion designer did admit to having veneers installed this past July.

Here’s where Tamara from Married At First Sight is now

She claimed to have chosen the procedure due to years of “grinding” her teeth down.

“Each dentist I saw over the last few years said the same to me that I had grinded my teeth down to the point where veneers were inevitable,” she described.