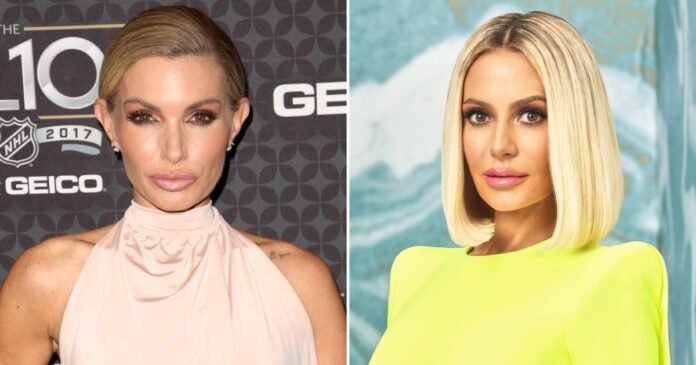 The businesswoman, 47, shared multiple photos of Kemsley, 44, via Twitter on Sunday, February 28. “Why? A beautiful woman w/ some fame & $ turns herself into a completely different character,” she wrote, adding thinking and squinting emojis. “Nooooo.”

Sassoon then took aim at the swimsuit designer again, tweeting alongside more pics of her former castmate: “NOTE TO ALL WOMEN … don’t over do it. TRUE BEAUTY IS WITHIN.”

The entrepreneur appeared on season 7 of The Real Housewives of Beverly Hills as a friend. The women joined the show during the same season, although Kemsley has been a series regular ever since.

The Bravo star clarified some questions about her look in a January Instagram Story Q&A with fans. “The only plastic surgery I’ve had done is my boobs,” she explained. “It drives me crazy when people say I’ve had plastic surgery on my face- I’ve done filler and Botox and I work with masterful makeup artists who can transform your face. If I ever decide to do plastic surgery I promise I will happily share it.”

Kemsley previously noted during the season 9 reunion in July 2019 that it was “comical” to hear people accuse her of having “a facelift and a bunch of surgeries.”

The reality star angered her costars during a May 2020 episode when she prioritized her appearance over Teddi Mellencamp’s wellness retreat. Kemsley complained at the time that she got up at 4 a.m., retorting, “I have a f—king life, Kyle [Richards]. I have a f—king life. I didn’t wake up to come straight here.”

Richards, 52, subsequently called out Kemsley on Twitter. “Saying you have a f—king life but came late because you wanted to have your hair and make up done doesn’t exactly classify as having a life,” she wrote. “First of all, I was not upset with Dorit in the beginning … I just don’t get putting vanity/ glam before friendship. It all went south when she said she had a f—king life.”

Kemsley tweeted at the time that what she chooses to do during her personal time is “my business – whether it’s glamming, taking pics for Instagram, or promoting my brand #beverlybeach.”

The Connecticut native teased in April 2020 that she and Richards “have our moments” but usually bounce back. “I think we feel comfortable enough in our friendship that we can get really heated and go at one another, and then … we can find a way to resolve it,” she told Us Weekly. “It’s not forever — it doesn’t ever feel like forever — but we have a difference in opinion quite a bit in this season.”

Listen to Getting Real with the Housewives, your one-stop destination for Housewives news and exclusive interviews