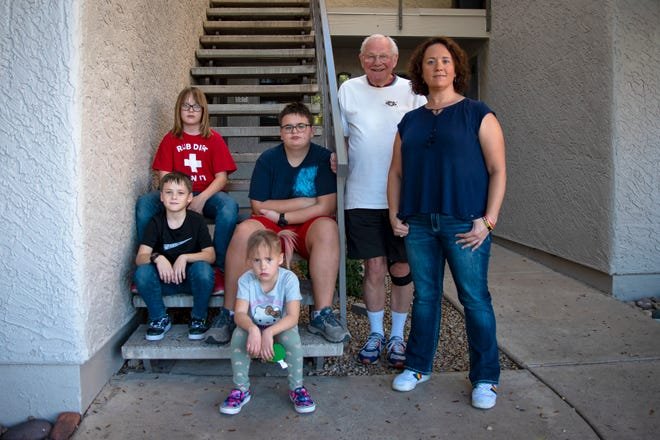 You’ve heard the stories, or maybe you’re living one of them.

Like the single mother hit with $800 rent increase – a stunning 50% jump in what she pays to house her family in an older three-bedroom apartment in central Scottsdale.

“That will take almost 100% of my income, and my (82-year-old) father is on a fixed income,” Kathleen Black told The Arizona Republic’s Catherine Reagor. “Our apartment isn’t that nice.”

The Black family isn’t alone. Residents across the Valley are being stung with some of the largest rent increases in the country, with no relief in sight.

Reagor reports that rents in the Phoenix area shot up nearly 30% last year, more than double the U.S. average. They’re expected to climb another 20% this year or possibly more, given the competition for apartments.

The immutable laws of supply and demand are landing people out on the street or on a friend’s couch – or in another state, as the cost to live here exceeds the size of far too many Arizonans’ paychecks.

Given the problem, well, you can imagine what the Arizona Legislature is doing.

Our leaders have spent what feels like a lifetime obsessing about the 2020 election and the many “reforms” needed to eliminate all that widespread voter fraud they can’t seem to find.

They are working on bills to train sixth graders in the safe handling of guns and shield 12th graders from apparently pornographic books like the “The Great Gatsby” and “I Know Why the Caged Bird Sings.”

They are working on bills to put a curfew on fireworks and to dictate where you can stand if you want to video the police.

And henceforth, due to our leaders’ exertions, dentists will be able to apply Botox.

But a bill to address the crisis that is affecting thousands upon thousands of Valley residents, rank-and-file workers who are the backbone of our community?

People who, no doubt, lay awake at night wondering what they will do and where they can go?

Cue: the silence at the Capitol.

There are bills to help. They’re going nowhere

Oh, there are a couple of bills that could provide relief.

Senate Bill 1587, for example, would rein in landlords who are absolutely gouging their tenants with impossibly high rent increases, simply because they can.

But that bill, like the others, didn’t rate so much as a single hearing this year. The Legislature, after all, is run by Republicans, given their one-vote majority in each chamber, and these bills were sponsored by Democrats.

“I personally think they’re so consumed with issues like elections, the P.C. (precinct committeeman) situation, and (Gov. Doug) Ducey’s tax cut repeal/replace that they don’t have the energy or desire to address this,” the bill’s sponsor Sen. Martín Quezada, D-Glendale, told me.

“Their base has been more consumed with elections issues and they’re being continuously distracted by that. And the only ones who’ve introduced bills to address it (skyrocketing rents) are Democrats and they aren’t interested in doing us any favors.”

Where else are renters supposed to go?

Quezada’s bill proposes capping rent increases at 5% plus the cost of inflation or 10% a year, whichever is lower.

I can almost hear some of our legislators – the ones who are also landlords – falling over in a full-on faint.

They’ll say that landlords should have a right to charge whatever they wish and that renters can move elsewhere if they don’t like it. Never mind that there is no “elsewhere” in a market that has a vacancy rate of just 3%.

If nothing else, at least hold a hearing

I don’t know if the answer is Quezada’s rent control proposal or perhaps an anti-gouging law, much like the law that puts a cap on interest rates at places that offer auto title loans and such.

I don’t know if longer term, the answer is to offer more tax credits to renters or builders of affordable apartments (as opposed to the bill the Senate recently passed, offering $150 million in tax credits to get Hollywood to make movies here.)

What I do know is that the Republicans who control the Capitol wouldn’t even hold a hearing to toss around ideas for what can and should be done.

To help people like Erin Smith of Gibert, an orthodontic treatment coordinator who was recently stunned to learn that the rent on her two-bedroom apartment is jumping 54%, or another $600 a month.

“I am a single mom with a good job who is about to lose her home,” she told Reagor. “I am watching my friends and loved ones here about to lose their homes, too.”

But hey, thanks to the our leaders, at least now they’ll be able to get Botox when they go to get their teeth cleaned.