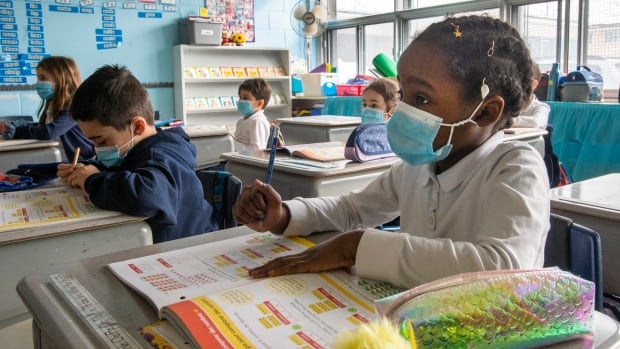 Alberta pediatricians are calling on the province to bring in temporary school mask mandates, as hospitals struggle to treat all of the province’s sick kids.

Members of the pediatrics section of the Alberta Medical Association, which represents over 300 physicians, sent a letter to Alberta’s chief medical officer of health, Dr. Mark Joffe, on Wednesday, calling for stronger public health protections to give overwhelmed hospitals a chance to recover.

“We don’t feel like there has been any mitigation, any response to an increasingly overwhelming and concerning crisis,” said Edmonton pediatrician Dr. Tehseen Ladha. “l absolutely think it’s dangerous.”

Ladha and her colleagues are calling for a number of measures, including a temporary mask requirement for students and teachers in schools.

“The huge concern is that if there’s no action that’s taken, that there will be children that fall through the cracks. … Really what we’re trying to do is prevent that,” said Ladha.

“If we decrease the odds in enough people, we prevent enough infections over a short period of time, that might stop the hospital from being swamped,” he said.

“So that if your child goes out and plays hockey and sustains a major facial injury there’s going to actually be someone to be able to treat that.”

The provincial government recently banned school boards from bringing in their own masking rules. But the chief medical officer of health can issue public health orders that would take precedence.

CBC News asked Alberta Health as well as the offices of both the health minister and education minister for a response.

“School mask mandates ended in the last school year based on a review of the evidence,” Alberta Healths spokesperson Charity Wallace said in an emailed statement.

The pediatricians are also calling for a number of other health measures including:

The province said it has a social media, online and billboard campaign in place to promote influenza immunization and it plans additional promotion in the coming weeks.

According to Wallace, Alberta Health has also sent out over one million texts and emails encouraging flu vaccination.

School-based COVID-19 and flu vaccine clinics, though, do not appear to be in the works.

“Based on past uptake, it is not expected that a school-based influenza immunization program would produce meaningful increase in immunization rates,” Wallace said.

Nationally,  the Public Health Agency of Canada’s Fluwatch report (for the week ending Nov. 26), shows pediatric hospitalizations are already higher than at the peak of a normal flu season.  And Alberta is reporting some of the highest rates of flu activity in the country.

Meanwhile, Ladha said if the government chooses not to act, she hopes parents will take action on their own.

“We hope that our letter provides that education and empowerment that families need to send their children to school in masks or to advocate for HEPA purifiers in the classroom, or to be more aware that there are vaccinations available for their children.”